How is COVID-19 impacting children in Kentucky and Indiana? | Data Deep Dive

Data shows COVID-19 cases in Kentucky's youngest age group have gone up more than 100% in the last month. 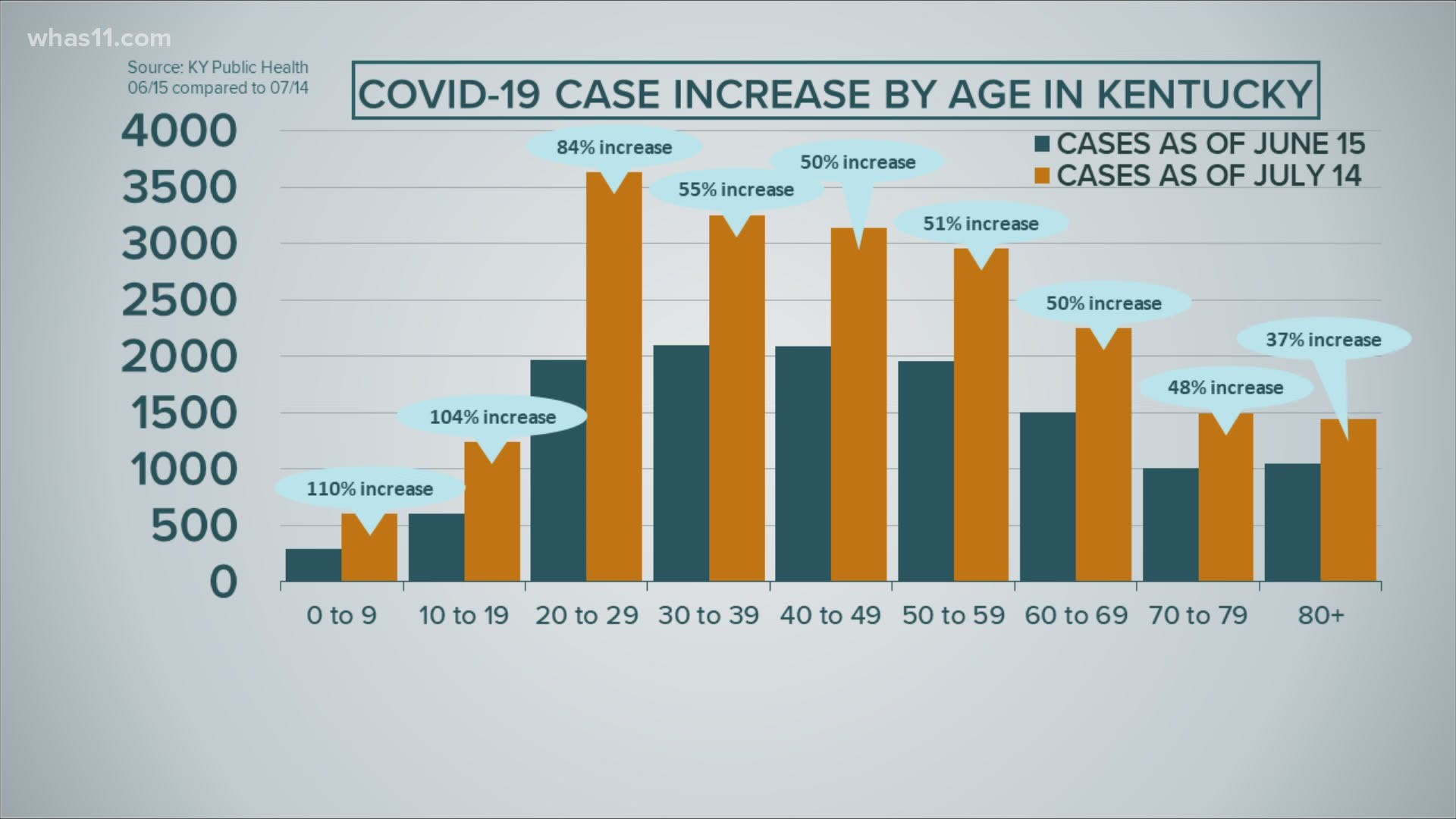 LOUISVILLE, Ky. — To reopen schools or not is a big debate happening across the country right now. Experts point to social benefits to resuming in-person classes, but they caution those benefits need to be balanced against risks with COVID-19.

This debate isn't only about the kids, it is about families at home, staff in the school and the overall risk to everyone involved.

How are the different age groups being affected? And should parents be worried about bringing their kids into schools or letting them play on sports teams?

"This is a very sneaky, very clever, and very ferocious organism. And it doesn't care whether you are young, middle-aged, old or very old, ancient," Dr. Ruth Carrico, UofL infectious disease specialist, explains. "This organism will affect you, it will infect you, it will cause problems."

Gov. Andy Beshear has started giving updates on new cases of COVID-19 in children who were in child care, but children continue to be a very small percentage of the overall number of cases in Kentucky.

A graph breaking down the total number of COVID-19 cases shows adults aged 20 to 29 actually account for most of the cases in Kentucky right now.

A different graph showing increases in cases from June to July, though, does show Kentucky has seen the biggest increase in cases among young people within the past month.

Although in the youngest age group, cases are up by more than 100% in the last month. This data is what Beshear has referenced when discussing new cases coming out of youth sports practice and child care.

Beshear said Kentucky had 22 child care center cases as of last week, 15 of them staff and seven children.

On Tuesday, the governor said nine kids under the age of 5, including an 11-month-old, were among the newly confirmed positive cases. The day before, Beshear said 11 children under five tested positive.

“We continue to see a rise in cases for children under five," Beshear said Monday. "This impacts our children, too."

That graph clearly shows the risk of death increase with age although.

"In terms of trends of what we're seeing generally over the past couple weeks in particular but it even started a little bit towards the tail end of June, is that the individuals who are testing positive for COVID are much younger. All the other age groups above age 30 have gone down slightly in July when compared to June. So we definitely see a trend where individuals testing positive today are significantly younger than they were a month ago," Dr. Brian Dixon, Regenstrief Institute Epidemiologist, explains.

With the next school year top of mind, we're breaking down the increase we're seeing in the youngest age group Indiana provides data on, those under 20 years old.

The percent of the increase in the youngest age group from May to June is higher than from June to July, noted with the labels on the graph.

Experts also point out that younger people are more likely to get tested now compared to early in the epidemic because of the accessibility of testing.

With more interaction among kids, it is not surprising we are is seeing more cases. Still, hospitalization and death rates for children continue to be the lowest for all age groups.