'We are suffering.' | Inmates claim Metro Corrections officials aren't doing enough to protect them from COVID-19

While many inmates and their families complain they’re in the dark when it comes to how facilities are mitigating COVID, jail staff say they're doing all they can. 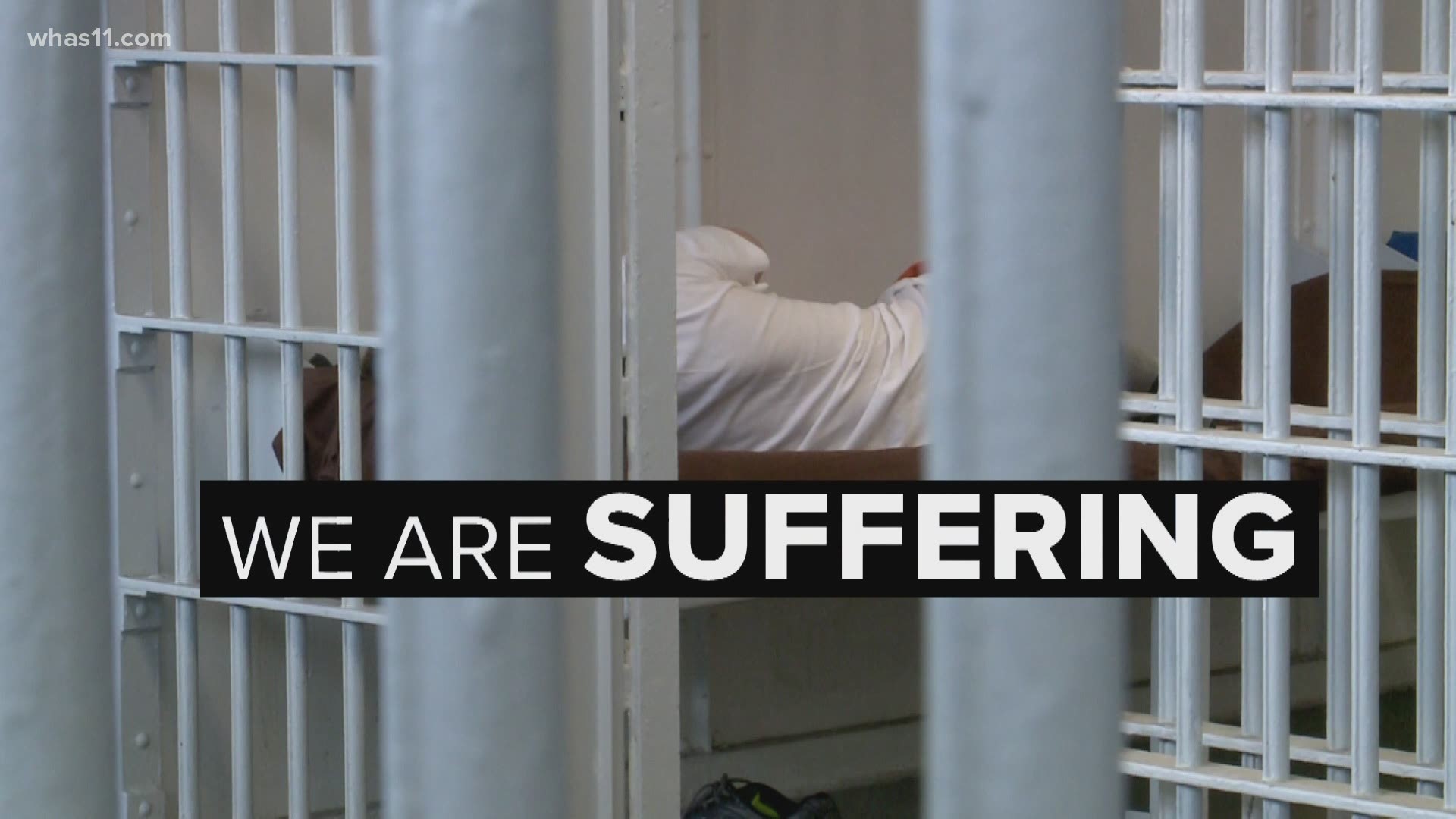 LOUISVILLE, Ky. — In the months since the coronavirus pandemic gripped Kentucky, the FOCUS team has been investigating conditions inside the state’s correctional facilities.

Many inmates and their families complain they’re in the dark when it comes to how facilities are handling the virus among correctional facilities -- a potential source of community spread.

Anthony Clark, Adam Ducap and Erin Smith-Spencer are inmates at Louisville Metro Department of Corrections, a jail in downtown Louisville. They share one thing in common – all three have experience with COVID.

“I’ve tested positive for COVID three times and I’ve been positive for over a month,” Ducap explained via a phone interview.

Clark described much of his experience as being unable to catch his breath and said he felt like his chest was caving in.

“I’ve been asking the nurse for like five or six different times,” he said.

“I miss his smile. It just reminds me how much I love him every time I see a picture of him – he’s just my baby,” she said.

Smith-Spencer is concerned because he said COVID is being downplayed at the jail.

“It’s more people sick than they are saying are sick,” he said. “They are not testing people like they say they are," he said.

Behind the walls of Metro Corrections, Smith-Spencer said his cries for help are often ignored.

“We are suffering,” he said.

How correctional facilities track the virus

University of North Carolina researcher Lauren Brinkley-Rubinstein has been studying outbreaks at correctional facilities nationwide. She said facilities often move in and out of outbreaks without sufficient strategies to mitigate risk over the long term, putting communities at risk too.

“That can really balloon neighboring community’s case rates,” she said.

She said different types of facilities have different ways of tracking and analyzing their COVID cases, from how they determine who receives tests to how to manage positive cases. She said it makes a fair comparison, among jails and prisons, for example, nearly impossible.

The Kentucky Department of Corrections oversees state prisons, reporting COVID cases online daily. Many critics say jails haven’t been as transparent. They often have fewer resources and operate independently. But Metro Corrections said from the start, they’ve been forthcoming about how they’re handling the pandemic.

“There is so much information and misinformation about COVID-19,” said Steve Durham, assistant director at Metro Corrections.

Durham said the facility reports their case numbers to the Louisville Metro Department of Public Health and Wellness. Their cases are also announced during Louisville Mayor Greg Fischer’s media briefings. The FOCUS team asked, for the sake of transparency, if Metro Corrections would post their COVID numbers online and Durham said they would be available over the coming days.

Inmate concerns on handling the virus

Some inmates at the facility have claimed they have to beg for cleaning supplies to protect themselves from the virus. When asked about that, Durham said “that’s not true.”

He would not allow the FOCUS team to inspect conditions firsthand but showed photos of cleaning taking place.

“Deep cleaning is happening every shift – so three times a day,” he said. “Cleaning supplies are plentiful.”

Durham said inmates receive two masks and officers receive protective equipment such as a N95 mask, a face shield, gloves and a gown when interacting with those who test positive.

Asked if his staff is always wearing masks, Durham said, “We know it’s not a hundred percent – but is it over 90? Yeah, it’s well over 90 percent of the staff are wearing masks.”

How is the facility handling their COVID case numbers?

Since March, 9,310 inmates have gone through the facility’s doors. An estimated 41% of them have volunteered to be tested.

Durham said the test is free and voluntary but not everyone will take the test. He also mentions that no one inside the jail has died from the virus while in their custody and officials are taking it very seriously.

One of the biggest challenges is that the majority of positive cases, Durham said, have come from inmates showing no symptoms.

“We have got our eyes on it – we are paying attention to it,” he said.

Of those who have been tested since March, he said 235 inmates have tested positive.

“We keep them under observation, separated from the inmate population,” he said.

Durham said three inmates have been hospitalized for COVID-19.

Durham admits there are challenges outside of his control – obstacles often unique to jails compared to prisons which are designed for long-term housing.

Among jails, many more people are moving in and out, which means greater risk for the virus to spread. The average length of stay for inmates at Louisville Metro Department of Corrections is about 23 days, according to Durham. For inmates at prisons, it’s much longer, with a year minimum.

“If the population were to drop, we’d be able to spread out and have less of that congregate setting interaction. That I wish we could do today,” he said.

Among the challenges, Durham said jail officials don’t determine the jail population, specifically who is admitted and who is released from jail. Judges have that power.

In an email, explaining the healthcare challenges specific to the inmate population, Durham said: "Twenty-five percent of the jail population has been diagnosed with a serious and persistent mental illness... Heart disease is prevalent. Detainees come with uncontrolled hypertension and uncontrolled diabetes."

He added: "People admitted to jail are not taking good care of their health... We review critical medical incidents to learn what went well and what didn’t so we can improve outcomes."

Yet, inmates complain many of the decisions made at Metro Corrections are inadequate.

In an open records request filed with the city government, we learned the jail doesn’t have a written COVID-19 policy for treating and testing inmates.

“Five days a week we meet with the medical staff, with the security staff, with the executive staff with our classification staff and we look at how we’re managing this epidemic,” Durham said.

Amelia Stone, the mother of inmate Erin Smith-Spencer, said the phone calls she receives from her son paint a worrisome picture.

“I’m scared,” she said. “I can’t wait for him to come home. They need somebody from the outside looking in to come in and see what they’re doing wrong."

Stone said jail staff and inmates have two sides of a story but Durham maintains the jail is doing what it’s supposed to.

When asked how the state is handling COVID-19 outbreaks at their facilities, a Kentucky Department of Corrections spokesperson released a statement:

“With every positive case in a prison, staff or inmate, we conduct contract tracing and work with the Department for Public Health to determine next steps which include testing needs. Treatment is determined by our contracted medical provider.”

“On behalf of Kentucky jailers, from my observations, our local jailers are doing very well in trying to fight the epidemic," said Daley. "Jails have been dealing with it on their own or have been working with other jailers to move people around, to keep COVID under control in local jails. With the limited ability among jails to control their populations, there’s not much else that can be done other than deal with cases when they become known in their facilities.”