Ally Rednour and her mother spoke with FOCUS about the incident in 2015 when the school bus door closed on her backpack and she was dragged. 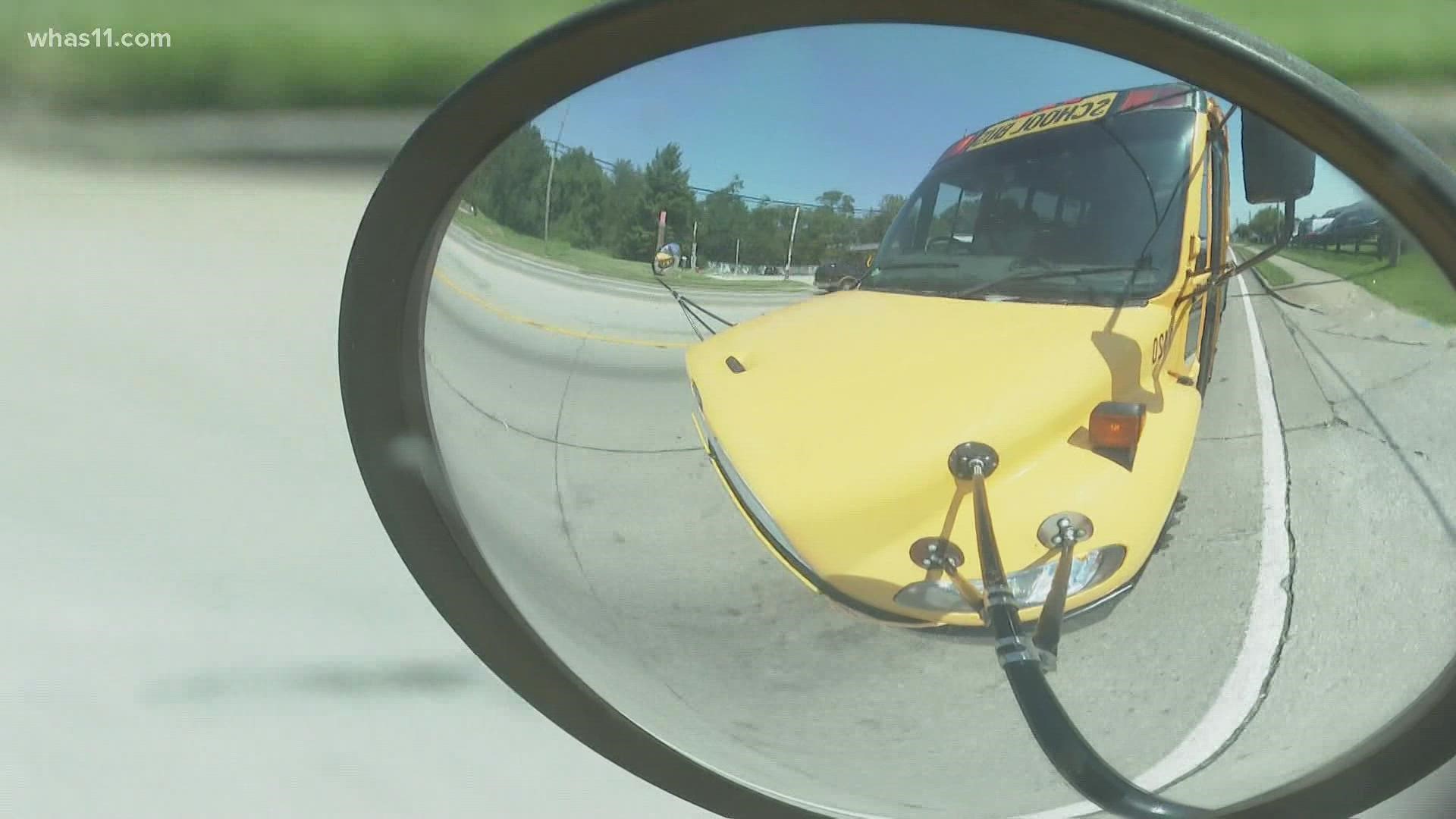 LOUISVILLE, Ky. — A young girl is sharing her story publicly for the first time, after she was dragged by her school bus for about a quarter of a mile in 2015.

“Here’s her little backpack,” said Amy Ehman, her mother, going through the memories of that day. “It hurts my heart. We just kind of keep them tucked away.”

“I was thinking that in my mind,” Rednour said

The incident happened in May 2015 when her bus driver, Melinda Sanders, was speaking with a student standing next to her. She had a glass jar filled with pencils and a single ornamental rose that blocked her view, leading to a single blind spot. She dragged Rednour for about a minute, running a stop sign and turning a corner before she realized what had happened.

“It never gets any easier,” Ehman said.

Ehman, driving a school bus herself at the time, remembered hearing a familiar number on her radio.

And when she came to a stop, she learned why.

“When I looked at my phone it said that they’re dragging your baby,” Ehman said.

“She dragged me a quarter-mile,” Rednour said.

It’s been six and a half years since the accident.

But Rednour still has reason to smile.

But the pain is always there. Rednour hasn’t been on a bus since. The trauma is hard to describe.

“All these struggles I had to go through, every day, pain,” she said.

“Our lives will never be the same,” Ehman year.

The bus driver has since been fired. A more than three-year court battle against Jefferson County Public Schools, where Rednour is a student, has been settled for $5 million. But they believe there’s more to be done.

“Why are you sharing your story with us for the first time?” asked FOCUS investigative reporter Paula Vasan.

“I just don't want it to happen to anybody else,” Ehman said.

If it weren’t for the camera inside that captured everything, accountability may have been harder to achieve. But Rednour and her mother say cameras are just the bare minimum. Now, they want school buses to have technology like sensors on their doors, to prevent another child from being injured or killed.

“Sensors are being tested,” said Elisa Hanley, a manager with the Kentucky Department of Education.

“Will additional safety features like sensors and cameras be a reality on Kentucky school buses?” asked Vasan.

Yet she said school buses are among the safest vehicles on the road. Data from the National Highway Traffic Safety Administration shows students are 70 times more likely to get to school safely on a school bus than in a car.

It’s up to individual school districts, she said, to decide what they need. Hanley believes the need is there.

“How can we prevent what happened to Ally from happening to anyone else?” asked Vasan.

“Training. Technology could certainly be an assistance to ensure that our students are safe,” Hanley said.

So, how safe are our buses? To find out, FOCUS analyzed more than six years of accidents involving Kentucky school buses since 2015, when Rednour's accident happened. FOCUS found injuries reported to state police involving school buses have decreased substantially: from 311 reported injuries in 2015 to 28 so far this year. Deaths have decreased too, from 3 in 2015 to 1 so far this year. Data comes from Kentucky State Police, from January 1, 2015 to September 22, 2021.

The stark decline in accidents, likely due in part to a pandemic that put fewer people on the road. But Hanley said it’s also because of action.

The shock of the surveillance video from inside the school bus that captured Rednour’s accident led drivers to adopt a new motto.

“Cameras are important for accountability and oversight. They need to be there,” Yates said.

But he said they’re just one step to curbing one of the biggest threats to school bus safety: distracted driving.

“It could have been prevented,” he said.

Year after year, state police data shows one of the biggest factors for accidents involving school buses is “inattention.”

“She wasn’t paying attention. She was distracted,” Ehman said.

“We just need to get all these babies home safe,” Ehman said.

It’s that drive for safety that pushes Rednour to relive this moment she begged.

But it’s worth it, Rednour said, if it saves one child from her scars.

A spokesperson with Jefferson County Public Schools said their bus drivers are trained to check doors and mirrors before their bus moves. All of their buses used to drive students have cameras inside, but no sensors or outside cameras. The cost for that technology, Rednour’s attorney estimates, is about $2,000 per bus. He’s now advocating for legislation to add those safety features to all school buses in Kentucky.