John Charlton looks at why the business of recycling has become more isolated. 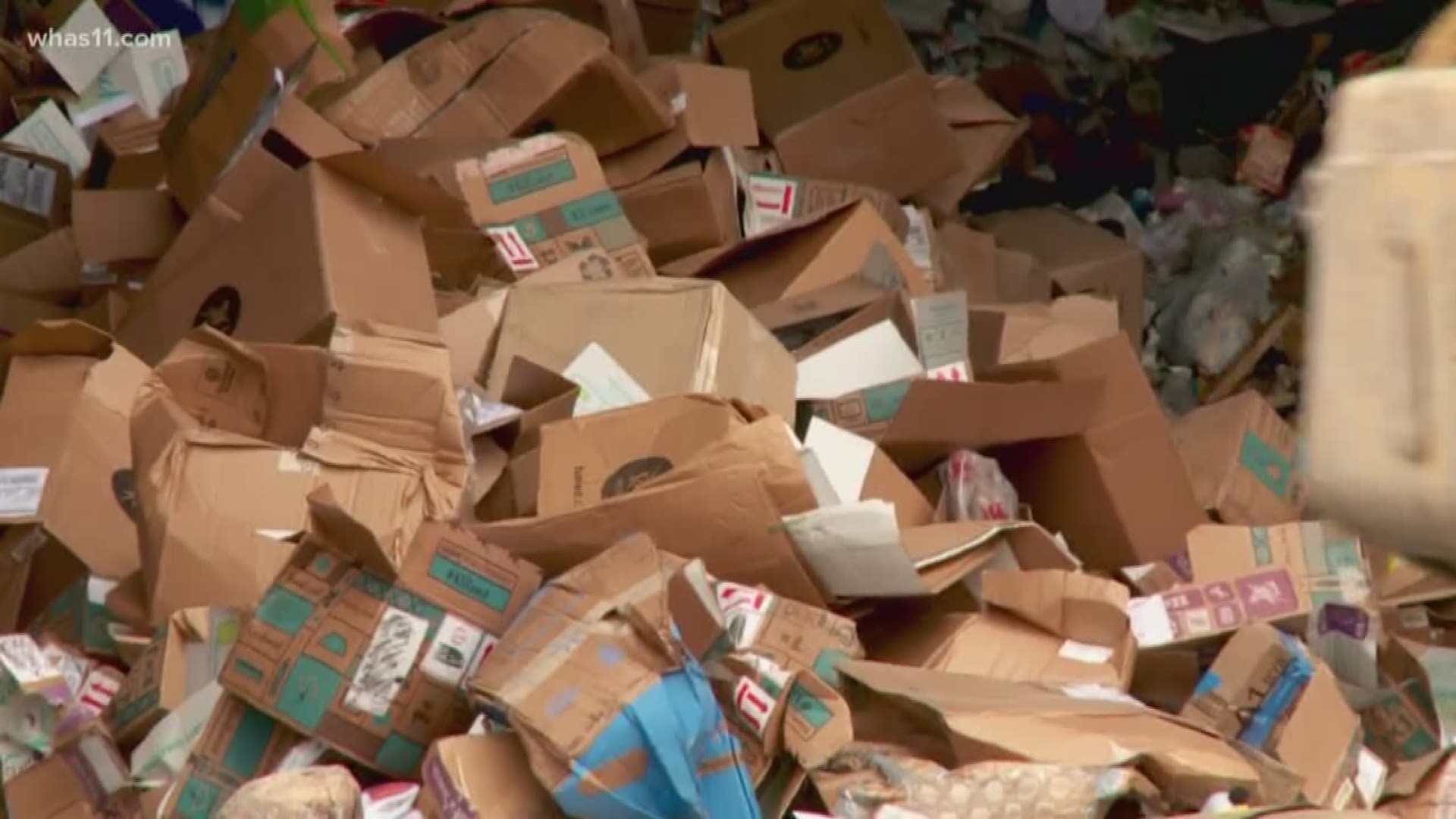 LOUISVILLE, Ky. (WHAS11) -- Like the opening round of a title fight, Wall Street is a ring where some take jabs at risky stocks. Most trade punches with market highs and lows and a few land a winning combination on commodities such as gold, oil and coffee. But there's one commodity--a garbage stock, if you will--that we all dump our fair shares on every week.

Recycling is not just an investment in our planet's future--the rubbish returns are basically stockpiled futures.

WestRock, off Fern Valley Road, separates much of Louisville's recycling—an average of 700 tons a day according to WestRock General Manager Mike Laverty. The plant is open 24 hours a day, seven days a week, allowing it to process an average of 14,000 tons each month.

The rest goes to a transfer station at Rumpke Recycling, where cardboard, paper, plastic, glass and aluminum are deposited and loaded onto a trailer for the 110-mile haul up I-71 to Rumpke's state-of-the-art, $32 million separation plant in Cincinnati.

Credit: WHAS11
A truck unloads at the Rumpke Recycling plant in Cincinnati, Ohio.

A major investment with profits literally on the line, boosting Rumpke's bottom line.

“Anything that tears we can take it, that's kind of our mantra,” says Sargent.

Sorted, compacted and bundled in bulk, Rumpke supplies manufacturing across the board, from railroad ties and boat dock bumpers, to aluminum cans that go back into the production process.

RELATED: What can I recycle?

Recycling comes full circle in a global economy. While the United States imports many products from China, a lot of America’s recyclables are exported right back to where they came from by the boatloads. But that's been cut off after China implemented their National Sword policy, which raises standards for what they will allow into their county to be recycled.

“The only thing that's been chaotic for us has been the price,” Sargent says. “Two years ago, mixed paper was selling for about $75 a ton. Today the index price is zero.”

Sargent says both the east and west coasts have been hit the hardest, with Middle America also feeling the effects of China’s new policy even though 98.2% of Rumpke's recyclables remain stateside.

“It all backs up,” Sargent says. ”This is the most dramatic downturn we've ever had in the recycling market. The market is flooded with this material right now.”

That just piles on product, tipping the scales on supply and demand--heavy on the supply, lighter on the demand.

Credit: WHAS11
Heavy machines at work at the Rumpke Waste and Recycling plant in Medora, Indiana.

Despite this bear market for the industry, Sargent says Rumpke has managed to land enough vendors which are buying what they're selling.

“We really have a lot of markets within about a 250 to 300-mile radius of Cincinnati. That's plastic, that's glass, that's aluminum, it's steel and definitely paper,” Sargent says.

When paper is recycled it's broken down to pulp. Pulp also makes cardboard and WestRock has diversified its portfolio by cashing in on cardboard.

“WestRock manufactures the majority of all pizza boxes in the country,” says General Manager Mike Laverty. “We have mills all over the country, all over the world. So we need this product.”

Packaging operations are primed to capitalize on what's known as the "Amazon Effect."

“People are buying everything through Amazon and through other online programs and everything's getting shipped to their houses,” Laverty explains. “As long as there's a need for boxes to put material in and ship material, then there's going to be a demand for our cardboard that we recycle.”

While WestRock hasn't cornered the market, it feels well-positioned for the future of recycling.

“We’re going to be a much stronger recycling industry, we have to be,” says Rumpke’s Steve Sargent. “Our industry is challenged right now, but the worst thing that we could do would be to leave the recycling business and the recycling commitment.”

Those in the recycling business don't see waste as a waste of time and money. Every ton recycled does a ton of good, and Mike Laverty says anything that slows the process of landfills filling up is a good thing.

“It's better than burying it in the ground. We can reuse it.”