Delta-8 debate: Is it legal? Depends who you ask 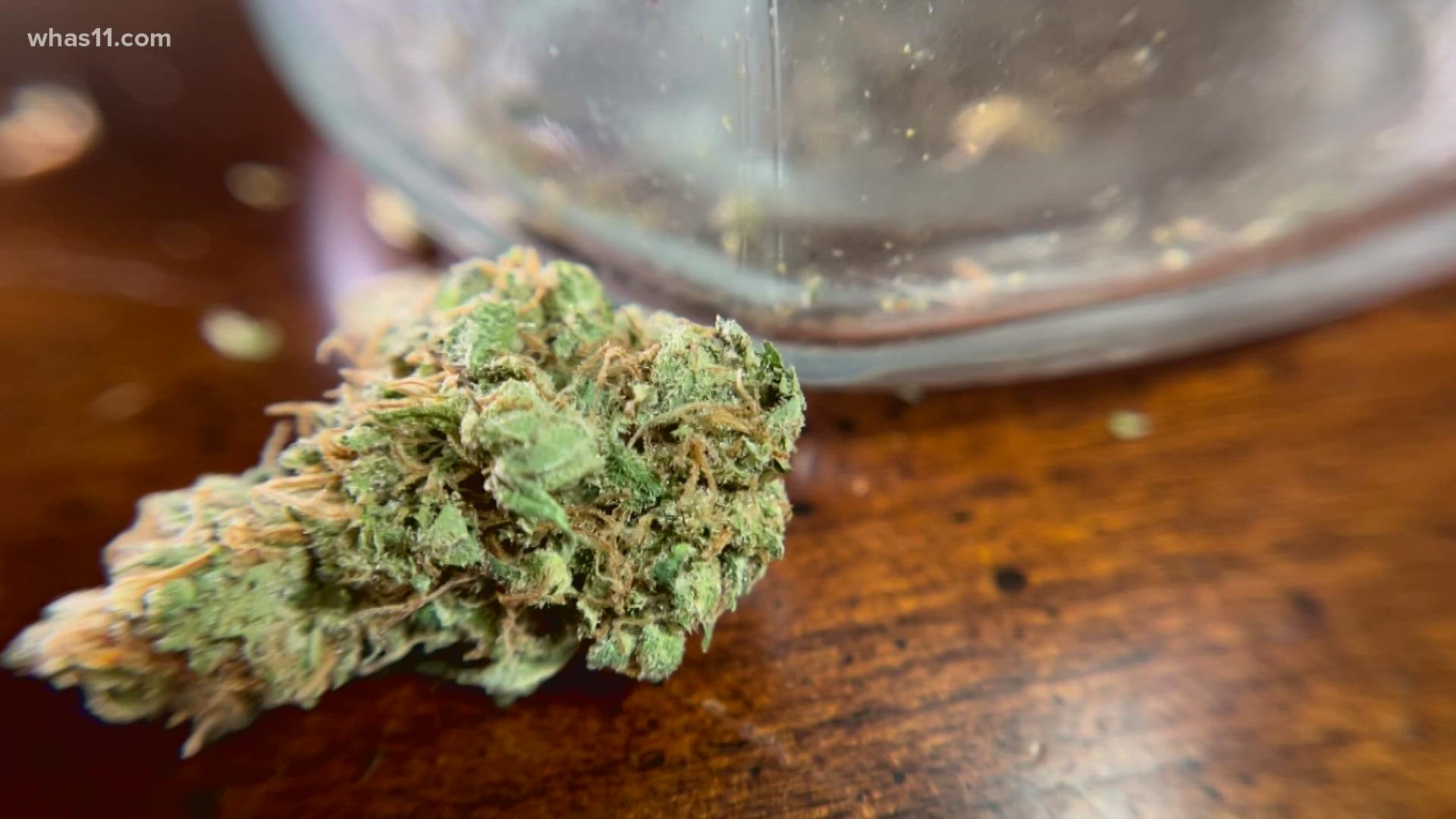 LOUISVILLE, Ky. — Delta-8 is the latest trend to hit hemp shops across the country, including here in Kentucky. But the hemp-based product is not without controversy. The legality of Delta-8 might depend on who you ask.

Delta-8 THC is a compound derived from hemp. In flower form, it looks like marijuana, but it's different than the Delta-9 THC compound in marijuana, which is what gives folks a "high."

Some users have reported much milder effects. Others have described euphoria.

Delta-8 can be sold in a variety of forms, like an oil or edible. It can be smoked, vaped, or ingested.

It's a product Dee Dee Taylor added to her shelves at 502-HEMP last September. Her Louisville CBD store is a place people go to find a fix for pain, anxiety, seizures, and more.

"It's about them. I want them to feel better," Taylor said. "I don't want them to suffer from pain, it has always been about my customers"

Taylor said when Delta-8 was first introduced, she admits she was skeptical of its legality.

Delta-8 advocates point to the 2018 Farm Bill. The Farm Bill was signed into law in Kentucky three years ago. It removed hemp and derivatives of cannabis with less than .3% of Delta-9 THC from the Controlled Substance Act.

"As long as it came from a hemp plant to start with, it was legal, or lawful," Taylor's husband, John, said. He is a processor for CBD products, not Delta-8, but supported his wife's decision to sell Delta-8 in her store.

"All of my research said this was legal, until that letter from the Kentucky Department of Agriculture was introduced," Taylor said. She explained that she even asked customers who worked in law enforcement, and was given a thumbs up to sell it.

The Kentucky Department of Agriculture sees the legality of Delta-8 differently.

Sean Southard with the Department of Agriculture pointed to a list by the DEA, which considers Delta-8 a controlled substance.

He argues that Delta-8 is a synthetic drug because it's produced from a chemical reaction. There have also been claims that it's made with battery acid.

"All of my products have been tested; that's the most important thing to know . They get tested by certified labs," argued Taylor. "I wouldn't have sold them if they weren't safe."

On April 19, 2021, right before 4/20, KDA sent out a letter to hemp license holders to address concerns with making Delta-8. It warned growers and processors that distributing Delta-8 is illegal, and could lead to expulsion from the Hemp Licensing Program, as well as potential criminal prosecution.

Taylor received a copy of the letter, at first thinking it did not impact her. Then she started hearing of stores across Kentucky being raided. One Facebook post from the Sheriff's Department in Casey County, Kentucky said the store owner would face felony charges if caught selling Delta-8 again.

"That really scared me. I was like, what do I do? People need this product," Taylor said.

Ultimately, she took it off her shelves.

The U.S. Cannabis Council also addressed Delta-8 in a recent report and stated the 2018 Farm Bill is not a "loophole," and does not "legalize the production of psychoactive drugs simply because the base material has been extracted from industrial hemp."

The Kentucky Cannabis Company responded to our story with a statement of their own saying in part "Kentucky Cannabis company does not support the use of Delta-8 products and advises against it.  If purchasing, we ask that you do some research of your own to make sure the product in question has been tested and has proof of testing somewhere on the product’s website or label."

Kentucky Cannabis Company labels itself as the original CBD company of Kentucky and the parent company of Bluegrass Hemp Oil, and argues there's lack of regulation within the market.

In July, Taylor was part of an injunction filed by the Kentucky Hemp Association against the KDA, Kentucky State Police and the Attorney General. The complaint said "that the April Guidance is invalid," and aimed to stop police from taking any enforcement actions against [selling Delta-8].

"I was always the good kid. I never got in trouble. I've never been a criminal, " Taylor said. "And when I started selling this, I was following the law and that's the thing, I still am."

Southard said the letter has nothing to do with the raids. He explained that police had the authority all-along to confiscate Delta-8 from store shelves because of the DEA controlled substance list.

She said she lost close to $20,000 in the first two weeks after pulling the product from shelves. But for Taylor, it's not just about money. She said the worst part is not being able to provide her customers with a product that helps them.

A hearing to address the injunction is scheduled for October.

"In 2007, I was stationed in Baghdad, Iraq. I was on top of a 15 foot building. Our Forward Operating Base was struck with indirect fire. I slid off the roof and landed flat on the concrete below me," Lemmons said. "I was knocked unconscious and diagnosed with a brain injury."

He continued to serve, heading to Honduras and Fort Knox, before retiring in 2014. Following his exit, as is protocol, he underwent a lengthy physical and mental evaluation.

He wasn't officially diagnosed with PTSD, but he was prescribed drugs to treat various issues. According to Lemmons, the prescription drugs created a neurological chemical imbalance which didn't make him feel better. He knew there were issues he still needed to address within his body.

"For the first time in my entire life, I feel like I am truly alive," Lemmons said. "I feel that I am 100% alive, happy, active, resilient."

Lemmons said if people lost access to Delta-8 he would be devastated.

Lemmons told WHAS11 that he understands concerns with why Delta-8 might be considered a synthetic drug, but believes it depends where and how it's being manufactured. He argues that it needs to be mandated and regulated, not banned, so that people who need it can still have access to it.

This story will require continuing coverage.