T.J. Floyd was injured 11 years ago after flipping over his handle bars on his bike. Since then, his family has been on a mission to get legislation passed. 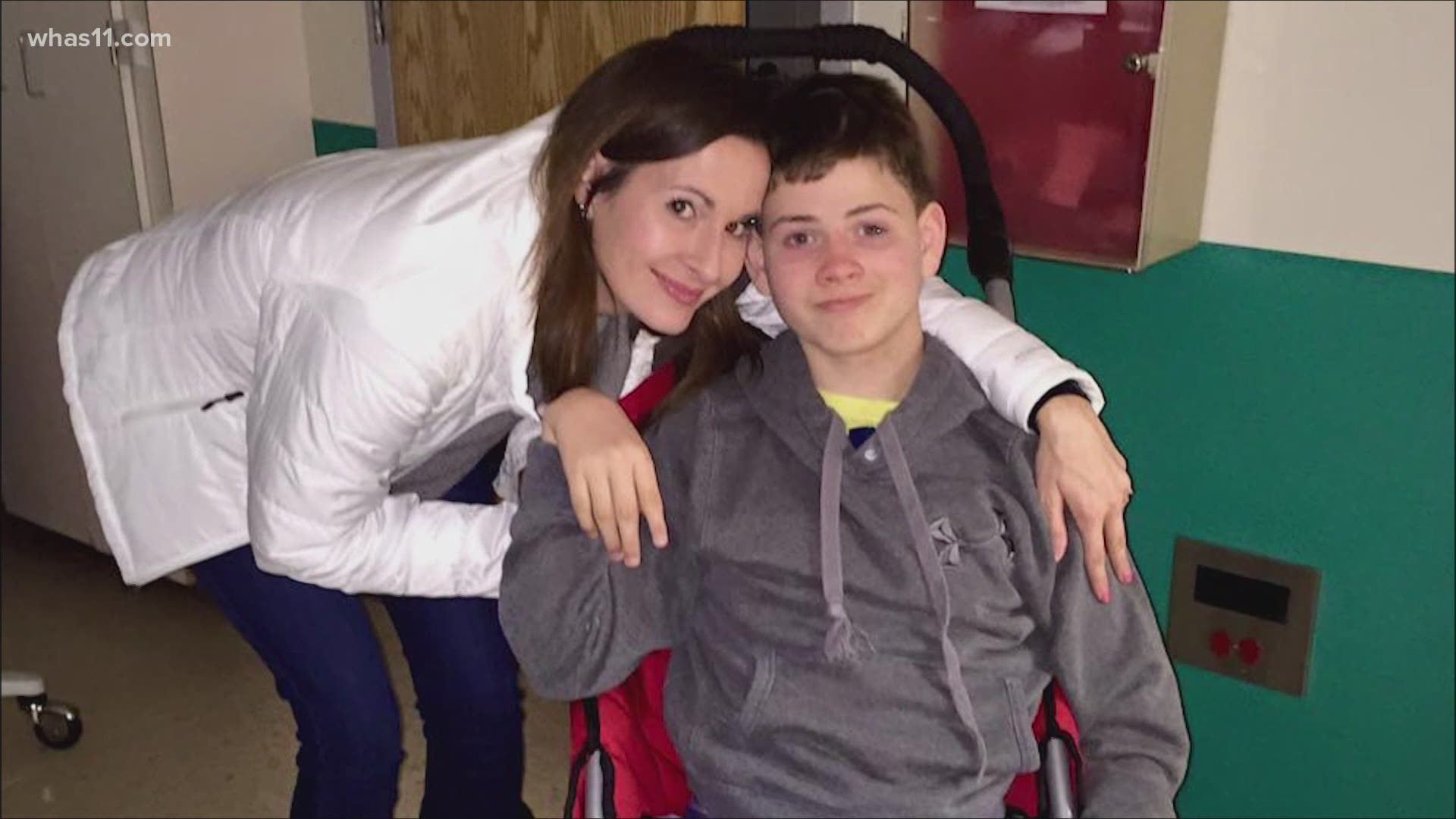 LOUISVILLE, Ky. — In a split second, everything changed for then 7-year-old T.J. Floyd.

“The kids had gotten off the school bus and it was a beautiful day like today and they wanted to ride their bikes," said his mother, Heather Floyd.

His future took a path he and his family don’t wish on anyone.

“They didn’t have a helmet on," said Floyd.

T.J. made one wrong move, and his world went dark.

“And he ran into the back of my other son and flipped over the handle bars and hit his head," she said. "Technically what I was told was that he was in the dying stages."

After four hours of surgery, T.J. survived. But he suffered permanent brain damage.

“So it’s a really massive, fast, aggressive brain bleed. And his skull had fractured. And he had swelling on his brain of fluid that pushed his brain over," said Floyd.

His injuries were so severe medical documentation shows doctors initially thought he had been hit by a car. Since that nightmare 11 years ago, after hundreds of trips to the doctor and hours of therapy, T.J. and his mother have been championing helmet use for kids.

“Why is it so important?” asked FOCUS investigative reporter Paula Vasan.

For the past six years, T.J. and his mother have been working to get what’s known as “T.J.’s Bill” to become law. If passed, it would require children in Kentucky age 12 and younger to wear a helmet when on a bike. Their goal: for Kentucky to join the 21 states and Washington, D.C. that have bicycle helmet laws for young riders.

Floyd said research shows how much of a need there is for legislation. It’s estimated 53,700 kids and teens suffered biking-related head injuries treated at hospital emergency departments nationwide last year, according to the U.S. Consumer Product Safety Commission.

Research shows bicyclist helmet use can be expected to increase as much as 4 times after a helmet law is enacted, according to the Insurance Institute for Highway Safety, based on an analysis by the University of Alberta. (The actual benefit depends on the age groups studied, pre-legislative helmet use, and the type of legislation, according to the University of Alberta researchers.)

The 2006 analysis was done by looking at already published studies, published in the United States, Canada, Australia and New Zealand. Through a meta-analysis, researchers combined those studies to produce an average result. This data has been used by the Insurance Institute for Highway Safety to understand the impact of legislation on bike helmet use in the United States.

“It’s frustrating because I don’t know what else to do at this point," said Floyd.

So we went to the opposition: David Newman, a founding member of the Kentucky Motorcycle Association.

“I believe these parents should be taking care of their children and not some law," said Newman.

“Are you against a law forcing children to wear helmets because you’re afraid it would extend to motorcyclists?” asked FOCUS investigative reporter Paula Vasan.

“I just don’t think it’s the government’s place doing that," he said.

Others argue it is. Similar to how seat belt laws have led to a reduced risk of death by 45% among drivers, according to the CDC, proponents of a helmet law argue it’s just the smart thing to do.

Among sports, cycling leads to some of the highest numbers of traumatic brain injuries every year. And it can bankrupt a family. A moderate to severe brain injury will cost up to $7 million over the course of a lifetime for medical care, according to the Brain Injury Association of America -- Kentucky Chapter.

State data shows in 2019, more than 2,013 people under the age of 20 were treated for bike injuries at Kentucky hospitals. A total of 109 kids suffered traumatic brain injuries, according to the Kentucky Injury Prevention and Research Center. But experts warn bike injuries are hugely underreported. Not everyone goes to the hospital after an accident.

For the past 25 years, Beckhart has been traveling the state, teaching students how to bike safely.

“We’d like to see everybody wearing a helmet. But that’s probably not ever going to happen," said Beckhart.

Many kids think bike helmets are just not cool. Others say they’re uncomfortable. Among children and their parents statewide, Beckhart says there’s also a lack of awareness about how to wear a helmet correctly.

There are some things to keep in mind:

“It’s probably the most important thing you can do is put your helmet on," said Beckhart.

He said if a helmet becomes a habit for just one kid taking part in his bicycle safety classes, they've been successful.

“I’m probably going to tell my brothers and sisters to always have their helmet on too," said Caleb Koenig, an 11-year-old student who participated in Beckhart's class.

Since T.J.’s accident, every day has been like a puzzle, trying to connect the pieces, relearning how they all fit together.

Now 18-years-old, while his childhood friends are going to college, T.J. goes to therapy. For the rest of his life, he’ll require full-time care.

His family said they won’t stop fighting until T.J.’s Bill becomes a reality.

It’s legislation that focuses on state-wide education and awareness. Because what happened to T.J., they say, was preventable with just a few seconds, and a click of a strap.

The Norton Children’s Hospital Bike Safety Rodeo is designed to teach bicycle safety to third-, fourth- and fifth-grade students in Kentucky and Southern Indiana. By riding bicycles through a mini-obstacle course, students learn the rules of the road and how to apply them. Norton Children’s Prevention & Wellness provides this bicycle safety program to schools in Kentucky and Indiana, free of charge. The program is funded through the Children’s Hospital Foundation. Learn more information here.

Guidance from the U.S. Consumer Product Safety Commission on helmet use among kids:

Which helmet for which activity?