They turned to the I-Team for help exposing what they say are the dangerous hospital policies that almost cost their child his life. 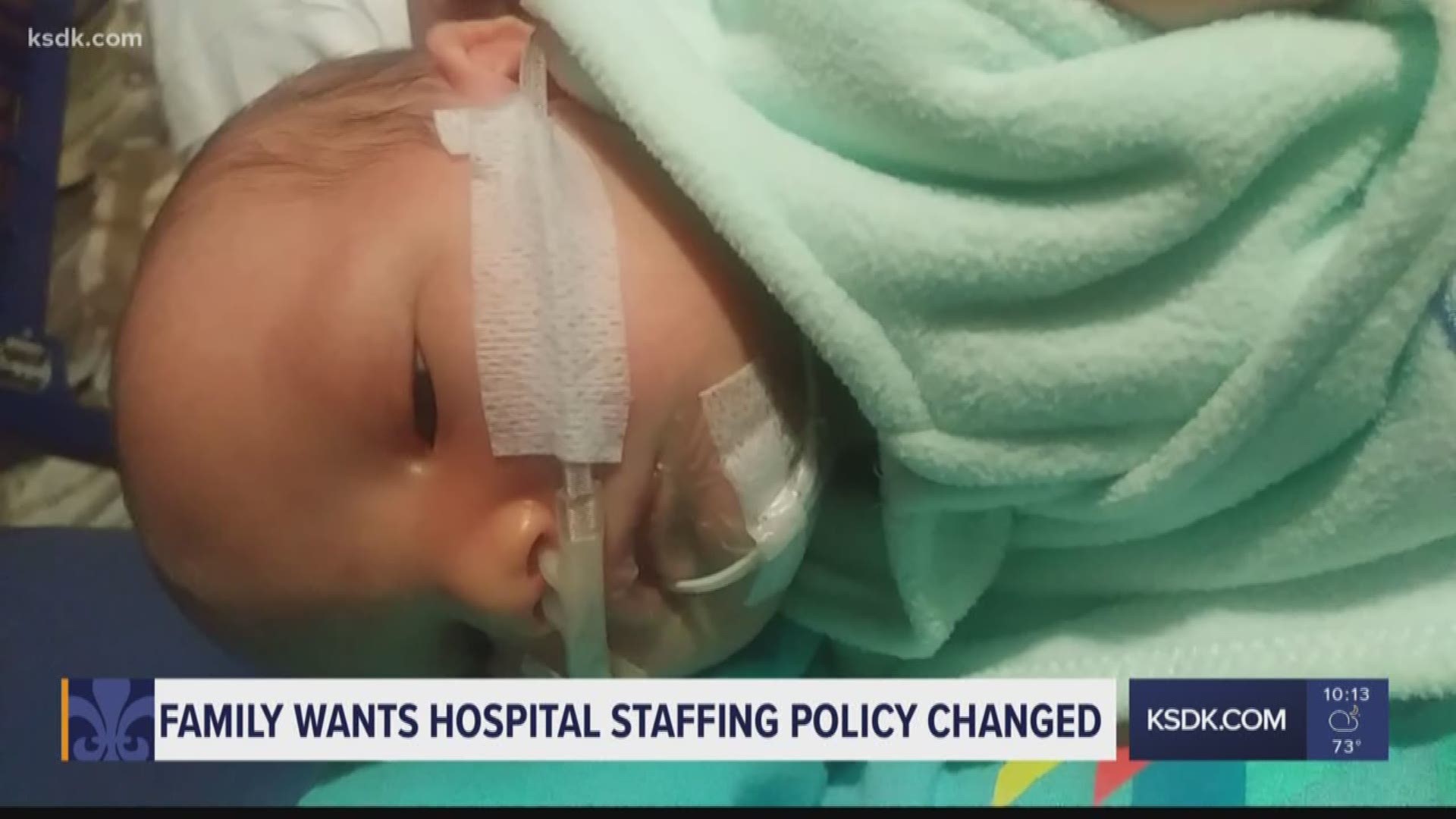 ST. LOUIS — It's every parent's nightmare.

Your child is in the hospital gasping for breath. Dying in front of your eyes.

You call for help, but no one comes.

That's what local couple says happened to them.

They turned to the I-Team for help exposing what they say are the dangerous hospital policies that almost cost their child his life.

"It's loud. All the alarms are banging and going off," said Daniel Weyand, father of four, and Pastor from Jefferson County.

When it happened, you would think the Weyands were in the best possible place. In the world famous Children's Hospital. Yet Weyand and his wife were still terrified.

Because in front of their eyes, in the neonatal intensive care unit, their newborn son Joshua was dying.

"His body is begging and gasping for breath," said Daniel.

And despite the alarms and lights, neither a doctor nor a nurse was around

"I was calling out into the hallway," said Heather.

"No one is coming. No one came," said Daniel.

So where was everyone?

For a hospital or healthcare facility, having staff ready and on-hand is a life or death issue.

Numerous scientific studies dating back decades have shown the fewer the nurses, the more patients die.

So where were the nurses in this case?

Turns out the answer, the Weyands say, was lunch.

"I asked, just asked her, 'What is policy, how many nurses do you allow to leave at lunchtime?' She said 'Well it never broke 50 percent.'"

That was the answer Daniel says he got from the manager of the NICU.

"They allow 50 percent of their nurses at lunchtime to leave the NICU," said Weyand.

And he says it wasn't just a lunchtime issue. Daniel claims the manager told him it also happens during dinner — as much as 50 percent of the NICU staff, gone.

"The nurse who was responsible for my son at that moment never showed up. Come to find out, she's just following the policy of the hospital," said Daniel.

The baby's medical records — which the Weyans gave us — support their allegations. A doctor noted how the couple "was appropriately concerned and scared" as they "waited for nurse to respond to alarm". Baby Joshua has Cri-du-chat Syndrome, a serious genetic condition.

Finally, in a moment of desperation, Heather took action.

"I flipped him over and sat him up and supported his neck with my hand. Trying to focus on getting him to take a breath," said Heather.

And finally, baby Joshua did take a breath.

"I got him and I just held him and cried."

"And as he's recovering, finally a nurse that just happened to be walking by said 'Hey, what's going on?'" said Daniel.

"It's sort of unbelievable to me that they would understaff a NICU," said Marti Smith, the Midwest Lead for National Nurses United.

It's the largest nurses union in the country, though it does not represent any of the nurses at Children's.

"I'm at a loss for words over that. Those patients are delicate at a level you can't even imagine.

They get half the nursing care they need for an hour each 12-hour shift," said Smith.

Missouri regulation doesn't give hospitals hard numbers on minimum staffing during breaks or any other time. Compare that to nursing homes, where state law specifies how many nurses are needed per patient.

The result? Smith believes some hospital administrators see the staffing regulation as more of a guideline.

Missouri hospitals are required to submit their staffing plan to the state annually, however...

I-Team: So the rules are in place but the hospitals don't have to follow them? There's no enforcement?

"They don't apply," said Smith. "That's the magical thinking of management. We have to give these nurses lunches, but we don't want to pay anyone to work extra. There are times when the hospital is innately unsafe because management hasn't made a plan for what happens at lunch time."

Baby Joshua is still in the NICU in a daily fight for his life.

His parents spend all of their time apart. Heather stays close to the hospital.

While Daniel cares for the couple's three other children, commuting back and forth, and these last several months they've been meeting with administrators at Children's Hospital.

To get them to change what the couple claims are their staffing practices during breaks.

The Weyand's say they have no plans to take legal action against the hospital. They say they simply want the policies changed.

We repeatedly asked Children's Hospital about their lunch and dinner break policies, especially if they let as many as half of their nurses go on break at one time.

They never answered the question.

But they did send a statement saying, in part:

California is the only state that has a law requiring hospitals to use a strict nurse-patient ratio. Massachusets will soon vote on a proposition that would create mandatory nurse to patient ratios.