State data shows around 9 percent of child care centers closed in Louisville over the last couple of years, largely as a result of the pandemic. 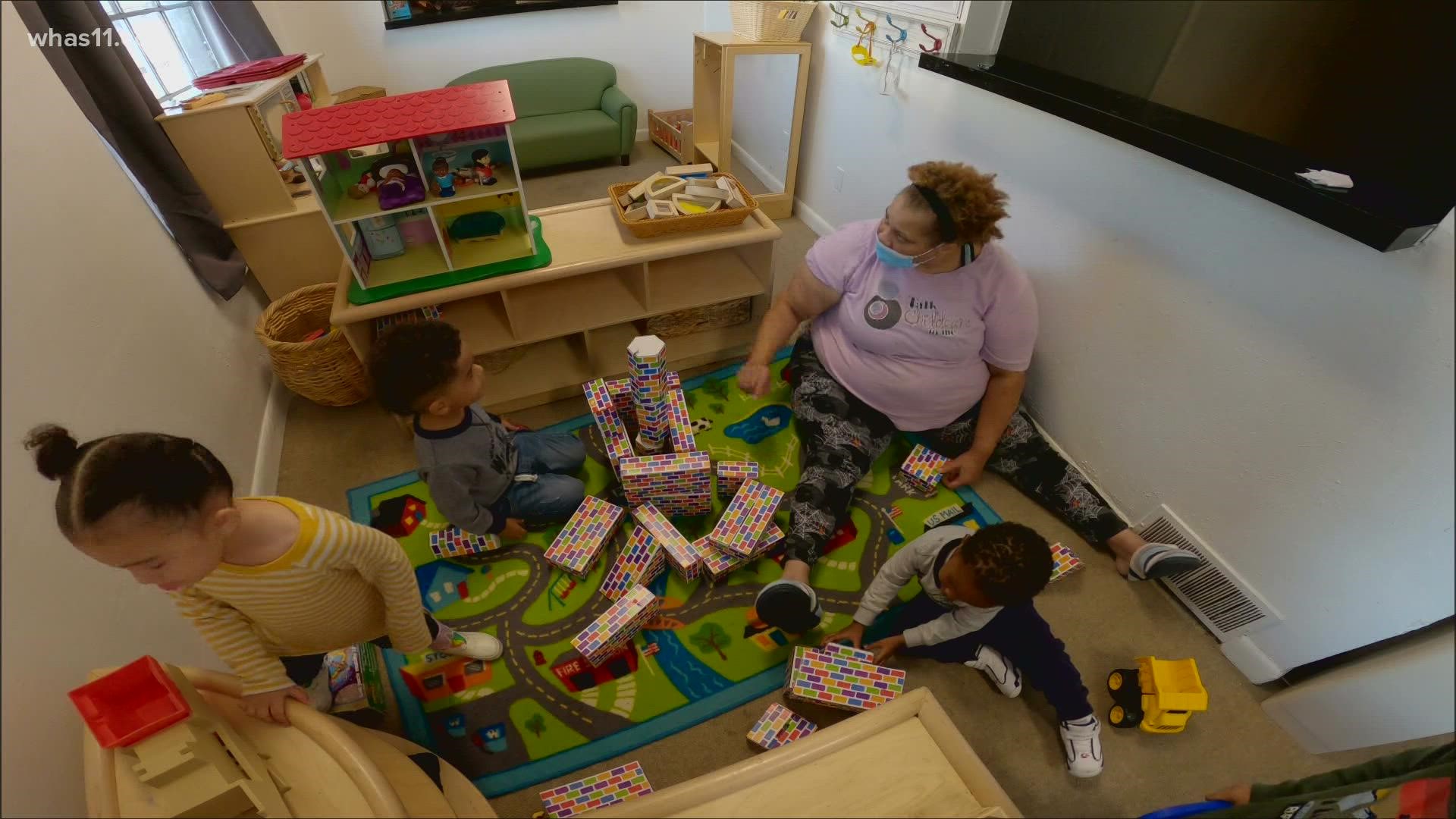 LOUISVILLE, Ky. — When Asia Rivers opens her door in the morning, she said she's opening doors never open to her.

“Yes, it really is where my heart is," said Asia Rivers, the owner of Talk Childcare To Me.

“I'm a teacher, I challenge them to be their best self," said Latoya Malone, a parent.

Malone said she can go to work with the comfort her 3-year-old is being nurtured, valued, and cared for. Because she said that comfort was absent from her childhood.

“I am actually a former foster youth," said Rivers.

She said the experience was "unbearable" and made her an unwavering advocate for children through her child care center. She opened it last year.

“Which was exactly two weeks before we were given the mandate order from the governor to close down," said Rivers.

That closure was temporary. But for many, the impact was not.

State data shows about 9 percent of licensed child care centers in Louisville have closed since the start of the pandemic in March of 2020. Rivers saw the impact around her.

“So you wanted to fill a need?” asked FOCUS investigative reporter Paula Vasan.

But now she faces more obstacles.

“There's so many different laws, regulations, red tape," she said.

State and federal requirements during the pandemic have ranged from smaller class sizes to more cleaning. They are safety measures to prevent the spread of COVID-19. But those in the industry say they’ve also led to seemingly insurmountable barriers.

“It's hard on everybody all the way around," said Rivers.

Between rent, insurance, staff, and keeping the lights on, it’s a high-cost business. Rivers' child care center doesn’t make a single dollar in profit until they have at least 20 kids enrolled. Right now, they have just seven.

Rivers said her center lost about $65,000 last year. One of the biggest factors driving that loss: she can’t find or afford enough staff to abide by state ratio requirements. For infants, it’s 1 staff member for every 5 kids.

“We need staff on board," said Rivers.

Without it, her sign at the entrance, advertising care starting at 6 weeks old, is now a reminder of their struggle. Rivers no longer offers care for kids under one year old. There’s no one to look after them.

“Why is it so hard to hire staff?” asked Vasan.

“Because you could go to McDonald's and start making $15 an hour right out the gate…” she said.

Compare that to $10.26: the median hourly wage in Louisville for child care workers, according to data from the Bureau of Labor Statistics. Child care workers also face stricter requirements.

Her strain is shared.

“We are all experiencing pretty much the same thing," said Rivers.

But the intensity of that strain may depend on where you live.

In her neighborhood of Newburg, there are 27 licensed child care slots for every 100 children. But head about 7 miles away to the Highlands, where median household income is about 76 percent higher, and access spikes to 84 slots per 100 kids.

Some of the lowest-income areas of Louisville have around 15 slots per 100 children, according to the Greater Louisville Project based on data from the U.S. Census Bureau and the Kentucky Department of Child Care, as of September 13, 2021.

“It is just really who’s the last child care standing at this point," said Rivers.

Some areas of Kentucky, Magoffin and Martin counties, have zero slots, according to state data.

“What's the impact on the community when there's a childcare shortage?” asked Vasan.

“It's catastrophic… It really affects our, you know, our economy, our workforce, especially women," said Rivers.

Adams said this loss has been felt during the last two years of the pandemic. Decades ago, as a new mother, she was one of those women.

“I didn't have affordable childcare," she said.

She was at the pinnacle of her career, working with a Congresswoman in Washington DC.

But she called it quits because she was spending more for child care than what she earned. Now she’s taking the memory of that hard decision to ask a hard question: “How do we remove that barrier?” asked Adams.

To help answer it, she’s one of about a dozen lawmakers on a new task force.

“We’re going to be looking at maybe upping the reimbursement rates," she said.

Their mission: to sustain and grow our child care system in Kentucky.

“We need to fix it or else shame on us," she said.

For Rivers, the clock is ticking.

“I'm going to give it another six months,” she said.

She said in about six months she will confront what may be inevitable. She said it would mean turning her back on her kids, their parents, her community, and herself.