Today is the 124th day protesters will be demanding justice for Breonna Taylor. WHAS11 will have multiple crews across the city providing the latest updates. 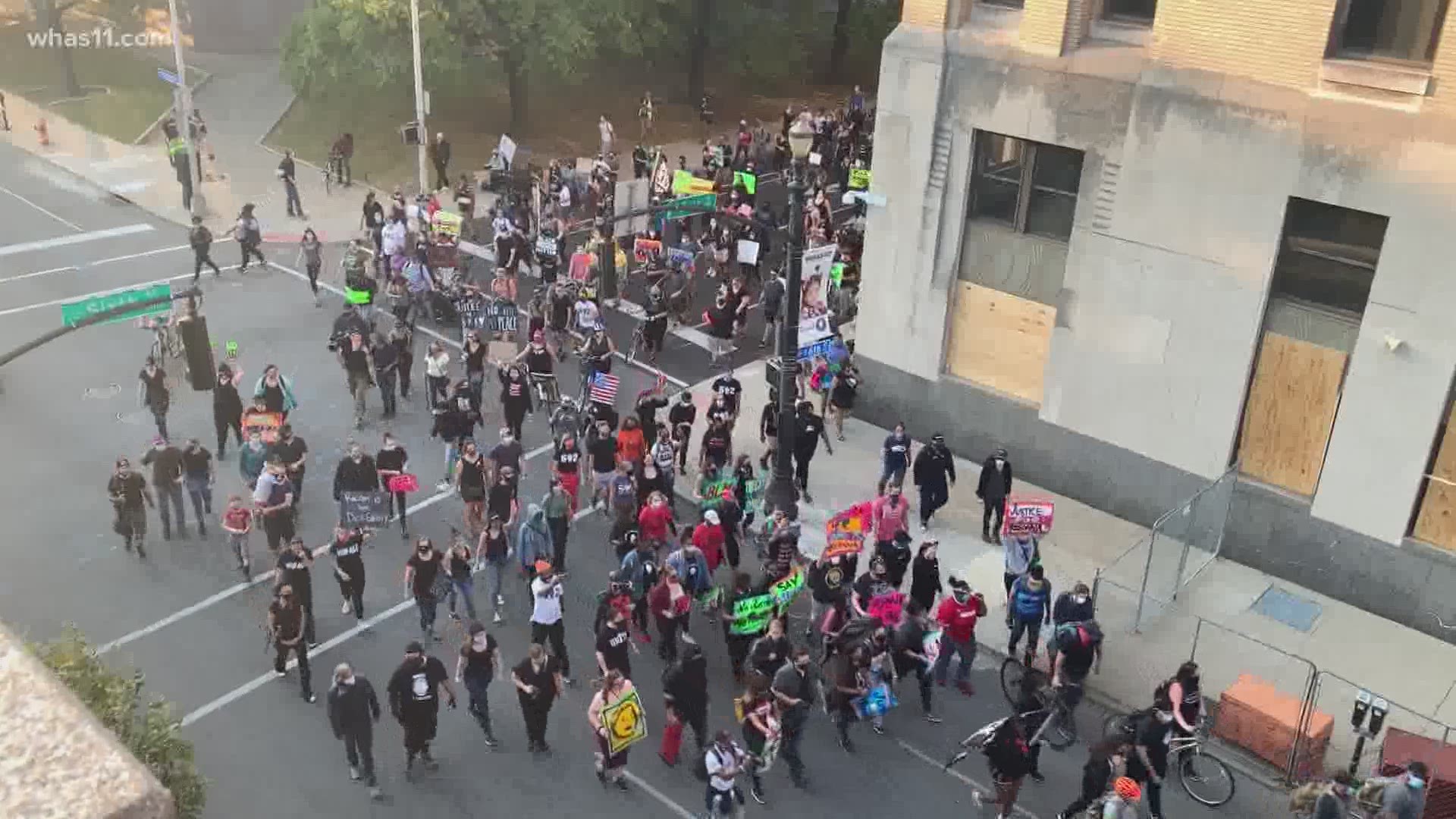 LOUISVILLE, Ky. — Editor's note: This blog contains details of what happened Saturday, September 26 in Louisville, Ky. three days after a Jefferson County Grand Jury announced its decision in the case of Breonna Taylor. All times listed are in Eastern Time.

Protesters filled the streets following the announcement. More than 150 people have been arrested in the past two days, Louisville police said. Two officers were shot Wednesday night, both are expected to be okay.

12:02 a.m. A car was in flames near a church where protesters sought sanctuary in downtown Louisville.

We are at 5th and Jefferson where there is a lot of law enforcement presence. There are no protesters in sight but a lot of vehicles and police presence @WHAS11 #nightteam #breonna #breonnataylor pic.twitter.com/u5id5hDUBI

9:02 p.m. Louisville Metro Police made an announcement via loudspeaker asking those that wish to "peacefully leave need to exit now westbound on Jefferson Street.

A small crowd of demonstrators begin marching up 6th Street as the city's 9 p.m. curfew goes into effect.

8:30 p.m. The gathering in downtown Louisville's Jefferson Square Park has gotten larger with some protesters saying they will occupy the park beyond the city's curfew.

“If you are ready to stand up to the pigs than f*** 12”...”we specifically want to have a perimeter around the square”...”if you cannot stay to occupy the space, then leave now” @WHAS11 #nightteam #breonna #BreonnaTaylor pic.twitter.com/wBkm71UbUp

7:45 p.m. The large group of protesters have returned back to Jefferson Square Park as the sun sets with one hour to go until Louisville's curfew goes into effect.

After making their way down chestnut, up fourth street, down second street and on to Jefferson they are back at the square just as the sun is setting.

This is certainly the biggest group we’ve seen here in quite some time. @WHAS11 #nightteam #BreonnaTaylor #breonna pic.twitter.com/Sw5Iw8zuD9

7:27 p.m. The Kentucky National Guard has been placed in downtown Louisville to help assist other law enforcement agencies during protests.

Day 4 of supporting the City of Louisville 🐦 by promoting safety for her citizens who exercise their First Amendment right.

➡️ We are postured throughout the city protecting life and critical infrastructure.

7:02 p.m. Protesters begin marching down Second Street towards Jefferson and 2nd Street near one of the city's blockades. Chants of "Black Lives Matter can be heard while police are nearby.

6:37 p.m. Protests have started at Jefferson Square Park in and protesters have begun marching in downtown Louisville.

Noon Today is the 122nd day protesters will be demanding justice for Breonna Taylor. WHAS11 will have multiple crews across the city for the latest updates.

Front door glass broken at a Dick's Sporting Goods in the 3500 block of Springhurst Blvd.

Confirmed break-in at the Home Center in the 3200 block of Hartlage Ct.

9:15 a.m. LMPD spokesperson Dwight Mitchell released a list of the 22 people arrested in Friday's protests. Charges for those arrested include Breaking Curfew, Failure to Disperse and Unlawful Assembly, among others.