Sen. Mitch McConnell spoke about the Breonna Taylor protest, what he hopes to accomplish from the next CARES Act and efforts to develop a COVID-19 vaccine. 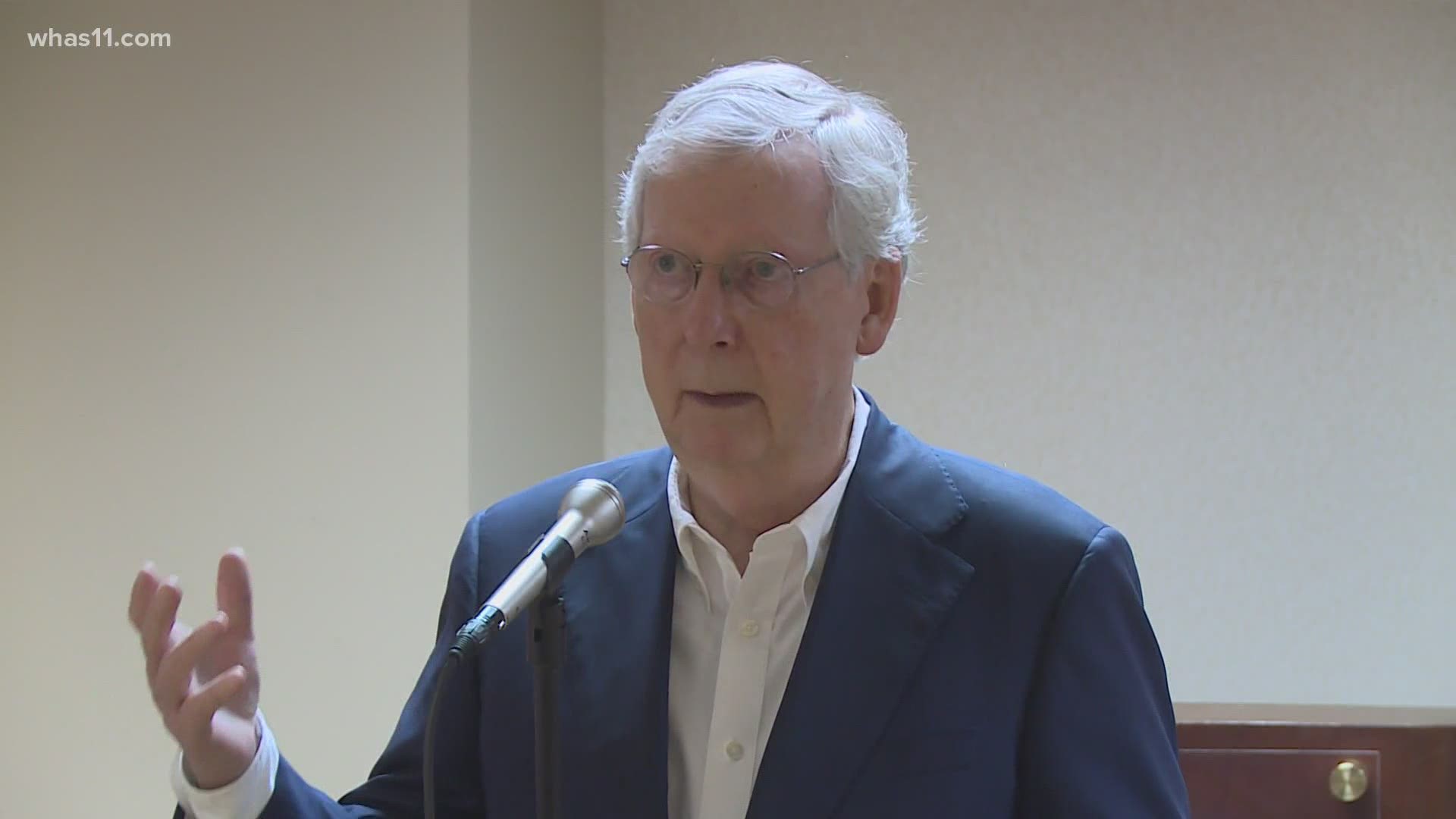 SHELBYVILLE, Ky. — We now know what Mitch McConnell thinks about the protest at the home of his ally and good friend, Kentucky Attorney General Daniel Cameron.

We also know more about what he thinks should be involved in the next COVID-19 stimulus plan, work on a virus and his opinion of the nation's coronavirus expert, Dr. Anthony Fauci.

The Senate Majority Leader knows Daniel Cameron well, he also knows what it's like when someone shows up to protest at your home.

Last fall, protestors took their loud opposition to the Senate Majority Leader’s sidewalk. There were no charges filed then or a year and a half earlier when others staged a "die-in" at his Highlands home.

LMPD escorted protestors from the Attorney General's lawn on Tuesday where many of the nearly 90 demonstrators now face trespassing and some felony counts.

"Sometimes justice, in order to follow the procedures that are laid out to conduct an investigation in a responsible way, are not quick enough to satisfy some people," said McConnell.

Leader McConnell backed his former General Counsel in the Breonna Taylor investigation, but did not discount Tuesday's action, admitting he knows what it's like to be a target of criticism.

"I personally, don’t find it a way to influence me, but this is a free country and provided that you're not trespassing or engaging in inappropriate behavior," said McConnell. "We're a country with a lot of robust voices and we've certainly heard them lately."

This stop at Shelbyville Hospital focused on the CARES Act and questions about a second act in the works.

“My view is that the next package that we develop ought to be geared toward doing everything we possibly can to make it possible for the kids to be back in school because if the kids are not back in school then you have jobs issues for mom and for dad," McConnell told a handful of media and hospital personnel.

He warned about the dangers of being "cooped up," the inability to shut down the economy a second time and gave a one word answer to his level of support for Dr. Fauci, “total.”

He also reminded people to use masks and touted efforts to develop a vaccine.

“I think, the straight talk here that everyone needs to understand, is that this is not going away until we get a vaccine,” McConnell said.

Kentucky’s senior senator also said that if a vaccine is approved by government agencies that he would not hesitate taking it.