'4 weeks': During stop in Louisville, leader of NFAC militia tells Attorney General to get to the truth in Breonna Taylor's case 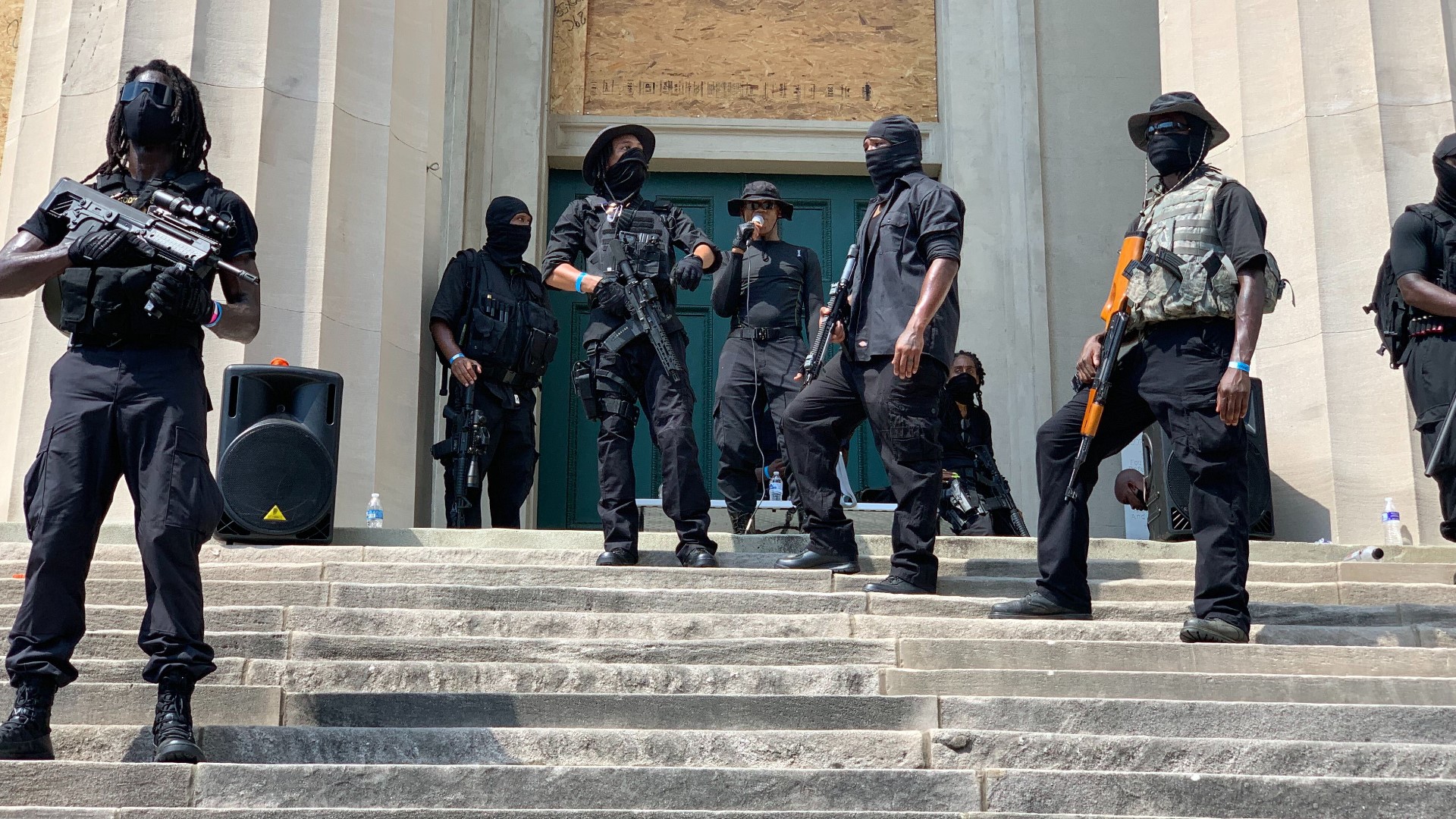 LOUISVILLE, Ky. — Members of the Georgia-based Black militia NFAC, which stands for "Not F**king Around Coalition” came to demand justice for Breonna Taylor who was shot and killed on March 13.

Dressed in all black and carrying assault rifles, the NFAC started at Baxter Square, made their way to Jefferson Square Park, and then to the front of Metro Hall where leader Grandmaster Jay gave his speech and demands.

Prior to the march three members of the group was injured at the park when a gun accidentally fired. Louisville Metro Police (LMPD) confirmed the shooting as accidental but also warned that it could have been worse.

Grandmaster Jay tells us this march was part two of their process. Part one was a conversation with Attorney General Daniel Cameron about justice for Breonna Taylor.

During his speech in front of Metro Hall, he warned the Louisville leaders to get to a decision in Taylor's death.

He says he gave the Attorney General four weeks to get to a decision or the NFAC may come back to Louisville.

"Do I believe they can do it in four weeks, when it normally takes eight weeks, well lets just say I wouldn't want to be in their shoes if I did."

"The NFAC is not going anywhere, it's going to get bigger," Grandmaster Jay says.

"As was confirmed earlier this week, the conversation between Grand Master Jay, Metro Council President David James, and the Attorney General was productive. The Attorney General reiterated his commitment to a thorough and independent investigation into the death of Ms. Taylor, but he did not comment on any specifics related to the timeline of the investigation."

In preparation for the militia groups LMPD blocked streets and put up barricades to keep them apart.

Other than the accidental shooting, the demonstrations and crowds remained peaceful. Counterprotesters, the Three Percenters were also in Louisville to support both sides they said.

"We're here just to make sure that everybody remains calm, let the protesters do what they want, keep everybody safe," a Three Percenters member says.

6:30 p.m. - Metro Police said they have not made any arrests in connection with the accidental shooting at Baxter Park, leaving three people injured Saturday.

The incident happened at the NFAC staging area where investigators said the individual was a participant in the march.

Police are saying they made five arrests during demonstrations but did not receive any reports of violence or damage and said the event remained largely peaceful.

“It has been a tension-filled day for all of us. For the most part, we’ve seen peaceful protests. However, we experienced a lot of violence and chaos from those hiding behind the right to peacefully assemble and using it as a platform to tear up and destroy our city,” Deputy Chief LaVita Chavous said.

Police said they support people’s right to protest and that they were there to protect people on both sides but ask that demonstrators respect the legal process.

"As was confirmed earlier this week, the conversation between Grand Master Jay, Metro Council President David James, and the Attorney General was productive. The Attorney General reiterated his commitment to a thorough and independent investigation into the death of Ms. Taylor, but he did not comment on any specifics related to the timeline of the investigation."

4:45 p.m. - The NFAC leaves, march back to Baxter Park in Louisville's Russell neighborhood.

10:30 a.m. - Louisville Metro Police (LMPD) officers try to get counterprotesters to move to areas so they can block streets.