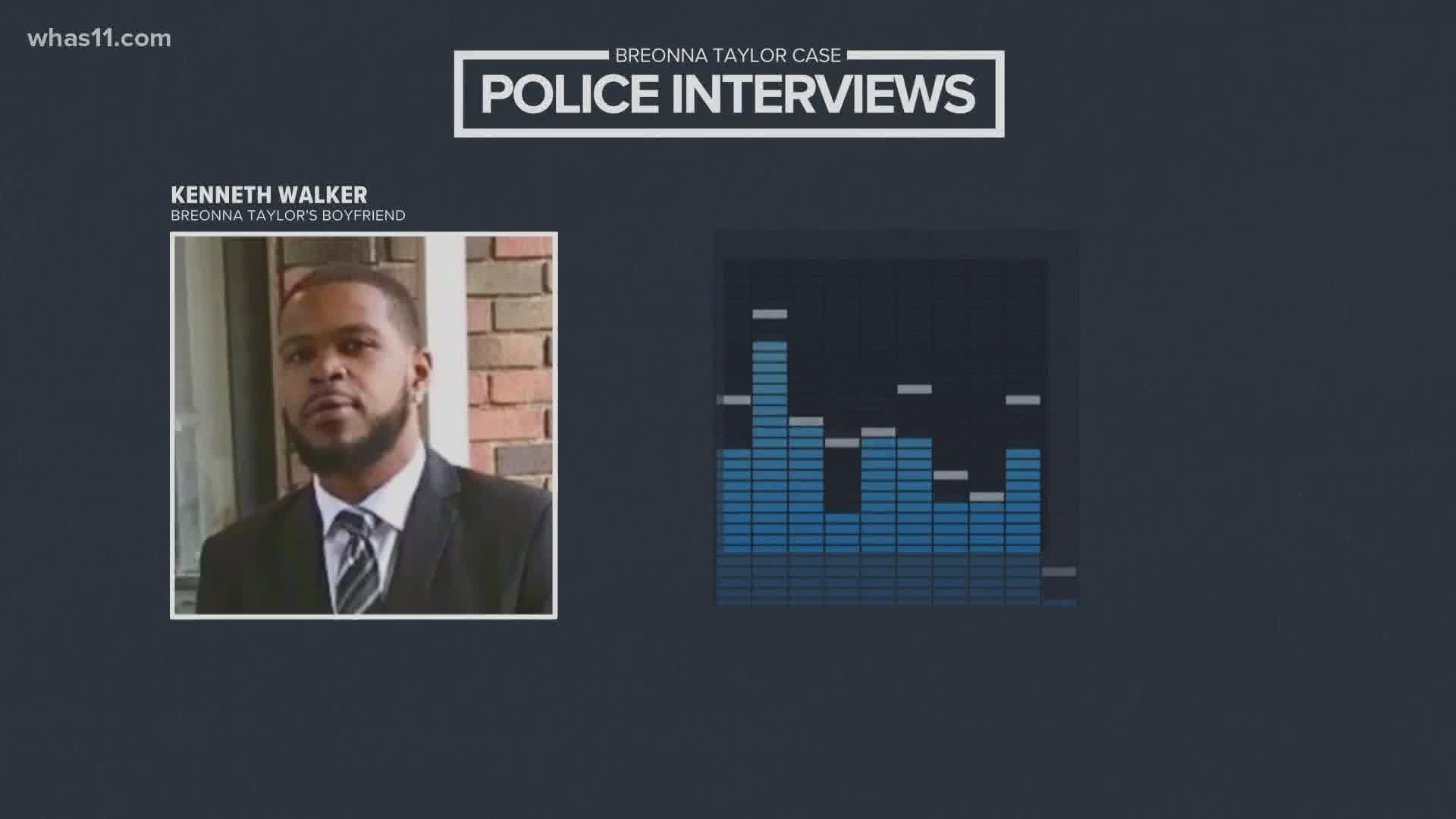 Mattingly executed the search warrant at Taylor's apartment the night of her death. He was shot in the leg by Walker, whose attorneys said he fired in self-defense, not knowing who was coming into the apartment.

His interview with LMPD's Public Integrity Unit on March 25 can be heard here:

In the audio recording, Mattingly says Breonna Taylor's apartment was a "soft target." Given this was a drug raid, by definition a soft target is a person, thing or location that is easily accessible and relatively unprotected.

Mattingly told investigators when they served the warrant on March 13, the only activity police noticed before knocking on her door was a TV light glowing in her bedroom.

Attorneys have told reporters in the past there were seven people on scene that night. In the interview, Mattingly names four other people working with him, Brett Hankison and Myles Cosgrove.

"They said they did not believe she had children or animals, but they weren't sure...said she should be there alone because they knew where their target was," Mattingly said.

When Mattingly says that police "knew where their target was" it appears to be a reference to Jamarcus Glover, who is Taylor's ex-boyfriend and one of the main suspects who was listed on the warrant. Glover was not at Taylor's apartment.

Walker, who was not listed in the search warrant, was at his girlfriend's apartment the night of the shooting. A registered gun owner, Walker fired back at officers executing the warrant, saying he did not know who was coming into the apartment.

"We're just trying to find out what happened," Walker said during his interview with LMPD. "I don't even know what happened."

In a statement, attorneys for Breonna Taylor's estate said the interviews prove police did not announce themselves like they said they did, saying there has been a conspiracy to cover up Taylor's death "since day one."

“They substantiate what we’ve maintained all along: that police did not announce themselves when they broke into the residence with a battering ram and released a shower of gunfire into the apartment, killing Breonna, that the warrant and its execution were based on erroneous information, and that Louisville police actively worked to cover up Breonna’s brutal murder," the attorneys said.

In his interview, Walker then cries explaining what happened when he heard a knock at Taylor's door.

"We both get up, start putting on clothes, another knock on the door, she's like 'Who is it?' loud on the top of her lungs," Walker said. "No response."

In his interview, Mattingly did say police announced themselves.

"Banged on it again, no response, at that point we started announcing ourselves 'Police, come to the door. Police, we have a search warrant," Mattingly said.

Walker, though, said he thought someone was breaking in.

"All of a sudden there's a whole lot of shots and we both just dropped to the ground and the gun like fell and I liked kicked it because I'm like scared to death and now we're seeing lights and stuff," Walker said.

Mattingly said he saw Walker with his gun once police tried knocking down the door.

"And as I turn the doorway he's in a stretch out position with his hands with a gun and as soon as I clear fires boom."

When asked if it was his officers who returned fire, Mattingly answered: "I don't know…I never saw anyone return fire. I don't think they did, especially my initial four, I know nobody did it was just me and this guy."

Walker says after firing one shot in self defense he and Taylor dropped to the ground.

"I'm yelling, 'Help' because she's right over here bleeding, and nobody is coming and I'm just confused and scared," Walker said.

At one point in his interview, Mattingly describes a moment when a neighbor exchanged some words with Brett Hankison, who Interim Chief Robert Schroeder terminated in June. Mattingly told investigators Hankison seemed "worked up," and he tried getting him to relax.

Walker was charged with attempted murder, though those charges were later dropped after Commonwealth's Attorney Tom Wine said more investigation was needed.

New video posted on social media Wednesday night also shows Walker being arrested the night of the shooting. That video can be seen here.

RELATED: 'I can assure you at the end of our investigation, we will do what is right': Kentucky AG asks for patience in Breonna Taylor case