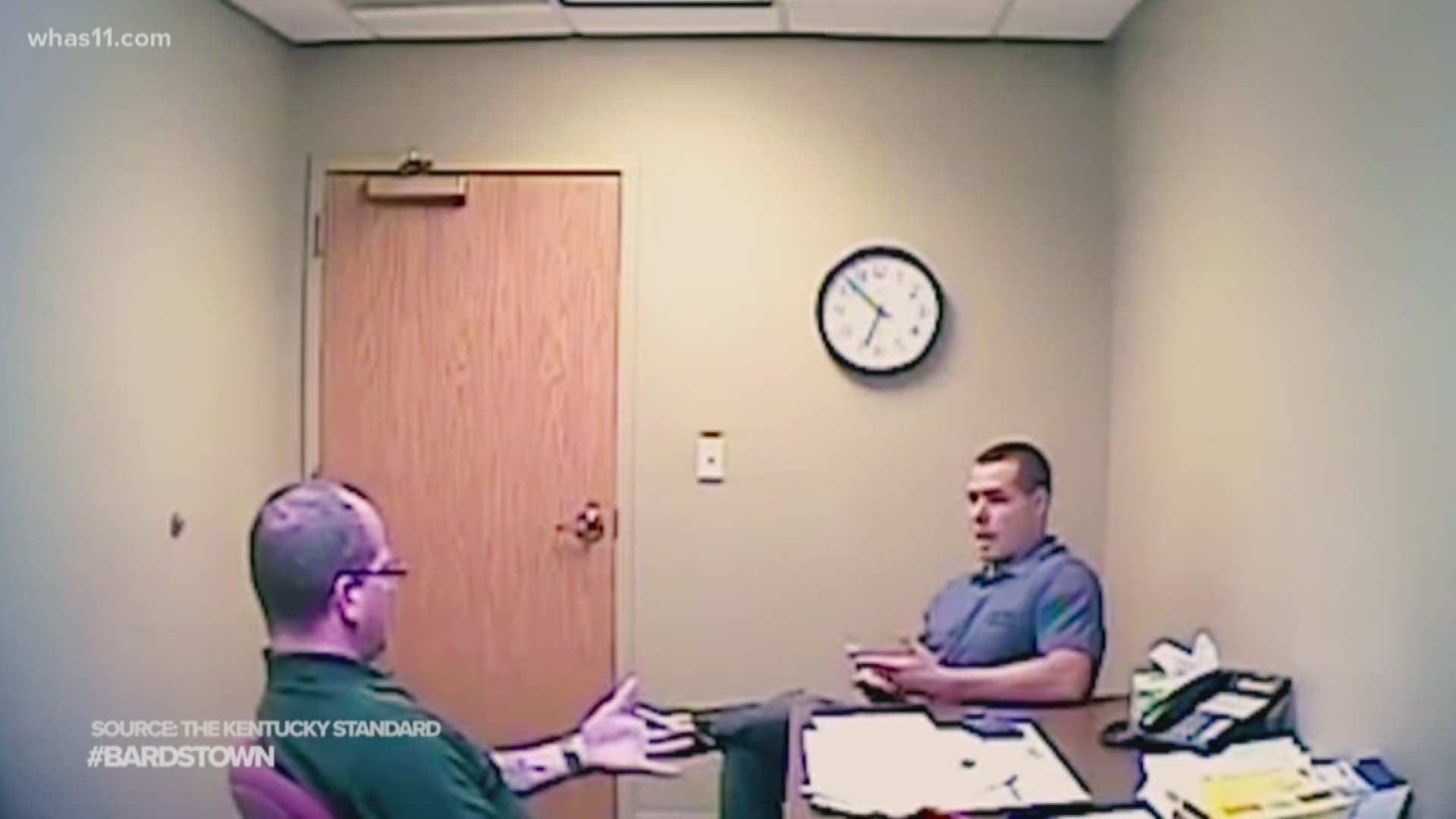 “So, you think you know who did it—maybe even how they did it, you just need the evidence to prove it?” “Correct.”

Houck told Rogers’s mother Sherry Ballard he had last seen her the night before she disappeared. Ballard said he admitted to her that the two got into a “little argument” over how he treated her children, but that she was still at the home they shared when he went to bed.

“[He said] supposedly they went to the farm and they walked back in the field to feed the cows,” Ballard said. “And then they left the farm and went back home, and Brooks went to bed and Crystal was still up on her phone…and supposedly she was not there when he got up.”

He told Snow the same answer—that the two were at the home they shared the last time he saw her. When asked what he thinks might have happened to his missing girlfriend, he had no answer.

While he told investigators he was shocked, Ballard said she did not feel his shock in the hours after her daughter’s disappearance.

After not hearing from her daughter, Ballard said she and her husband, Tommy, filed a police report. When she mentioned filing a report to Houck, Ballard said he did not offer to go with them.

“I told him…I looked at him and I said, ‘I'm going to go report her missing,’ and he said, ‘Well I think that's what you should do,’ and he left,” Ballard said. “He left like it was nothing.”

Ballard said Houck had he and Rogers’s son, Eli, with him when she asked where her daughter was—signaling to her that something was wrong.

“I look in the backseat, and Eli peeks his little head around at me and waves at me. The minute I saw that baby in the car I knew something was definitely wrong,” Ballard said. “And I was scared, you know, because that was not my daughter. She did not just take off and leave her kids ever.”

Ballard said her daughter also would not have left her purse or phone in her car where it was found on the side of Bluegrass Parkway. Detective Snow agreed.

"I guess the biggest problem that I have is that most women are not going to walk away from their purse and their cell phone and their car,” Snow said to Houck during questioning.

Houck answered Snow’s questions until he got a call from his brother: Bardstown Police Officer Nick Houck. During the call, Nick Houck told his brother to leave the interrogation room—and he did, ending the interview.

“Nick kind of injected himself in a way that I didn't like,” former chief Rick McCubbin said. “Ethics and integrity sometimes are all we have, and I didn't think he displayed a good example of either."

Though McCubbin said he believes Nick Houck did not know what happened and was only looking out for his brother, the move did not sit right with him. When the officer later refused to talk to investigators, McCubbin said he made a decision.

“I said, ‘I am going to the mayor as soon as you leave this office and you're not going to wear a badge. You do not deserve to be a police officer,’” McCubbin recalled. “And he was very, ’Okay.’ I thought, ‘Wow, okay.’”

Nick Houck was fired from the Bardstown Police Department the same day Brooks Houck was named the main suspect in Crystal Rogers’s disappearance by in October 2015.

So far only one person has been indicted in connection to Rogers’s disappearance: Houck’s employee Danny Singleton. Singleton was indicted on 38 counts of perjury and pleaded guilty to lesser charges of false swearing after lying about his whereabouts when Rogers went missing.

Still, it has been over four years since Houck has been named the main suspect, and he has never been charged. Newly elected Nelson County Sheriff Ramon Pineiroa said that though nothing has changed on the outside, he stands by naming Houck as a suspect.

“I would say he's still the main suspect in the case,” Pineiroa said. “Nothing has changed in the investigation that leads us to believe anybody else is the main suspect.”

Pineiroa did not comment on much of the case as the investigation is still active, but said that it has been the most challenging case the sheriff’s office has taken on in his 13 years. He said the office has been working on getting all “your ducks in a row” to ensure that they can move forward with the case.

“What people don't understand, or the misconception is, yes, we can go make an arrest today, but if we don't have what we need, we go to trial and he walks out that same day and says, ‘Yep I did it,’ you can't charge him,” Pineiroa said. “It's double jeopardy.”

Ballard said that while it is frustrating waiting for answers in both her daughter and her husband’s cases, she does feel better with Pineiroa’s team.

“They're very good, I mean they don't treat me like I'm the plague when I go up there,” Ballard said. “They're very cooperative with me. Before, when the old sheriff was here, it was hard.”

When asked by the UNSOLVED team if the sheriff’s office knew who did it, and possibly how they did it, but was just trying to put together the evidence to prove it, Pineiroa said yes.

“The main part is you got to get your evidence…[then] you'll move forward with the case,” Pineiroa said.

Ballard said she also believes she knows what happened to her daughter and husband, something she has not kept quiet in the years since the disappearance.

“I think Brooks murdered my daughter. I've never made that a secret,” Ballard said. “I think my husband's is related. I won't accuse anybody of his death, but I think it is related. Someone wanted my husband out of the way. They knew he was never going to give up searching for my daughter and I think they just want him out of the way.”

Ballard said she tries to keep pushing for answers, but admitted it was hard after her husband was killed. Still, family and friends continue to fight for justice in Crystal and Tommy’s cases—as well as the deaths of Jason Ellis and Kathy and Samantha Netherland.

The Ballards continue to ask for tips, putting yard signs up wherever they can, fighting to not only find closure for themselves, but for local law enforcement and the town of Bardstown.

“No one wants this hanging over Bardstown’s head,” Ballard said, “but somewhere people are pushing stuff in the back and ignoring it. And that's…don't set good with me at all. So, I hope people are aware of what's happening, and things will get better. And no family ever has to go through what my family has been through.”

Kentucky Attorney General Daniel Cameron said during his campaign that he wanted to make open cases like the ones in Bardstown a huge priority when he takes office. Pineiroa said it is mind-boggling that they have four high-profile cases and nothing has come from them, but said he will continue to work to find answers for the families that deserve them.

“It takes time—and I said this to Sherry probably three years ago or so…to put a puzzle together. This is probably not a 50-piece puzzle. This is probably a 1,000 or 2,000-piece puzzle,” Pineiroa said. “This is the magnitude of a case that we're working, but surely…piece by piece…eventually that puzzle will work itself.”

More than five years after Rogers' disappearance, investigators were seen taking boxes, filing cabinets and even keys from the home of Brooks Houck as the FBI executed multiple search warrants.

Houck watched federal agents and the IRS search his house from feet away. The FBI announced it was taking over Rogers case in August 2020, opening a new task force website to ask for tips. While neighbors said they did see some Houck family members leaving with police, there has been no arrests.

The development came two weeks after Rogers' family was contacted that possible human remains were found in Nelson County. While the remains have not been identified, the FBI confirmed they were human remains likely belong to a female estimated between 24 and 82 years old, with height between 62.6 and 70.9 inches.