13 Investigates: Look where she found her stolen cellphone!

13 Investigates has learned what happened to Abby Simpson has also happened to other cell phone theft victims in central Indiana, prompting concern for some local police departments. 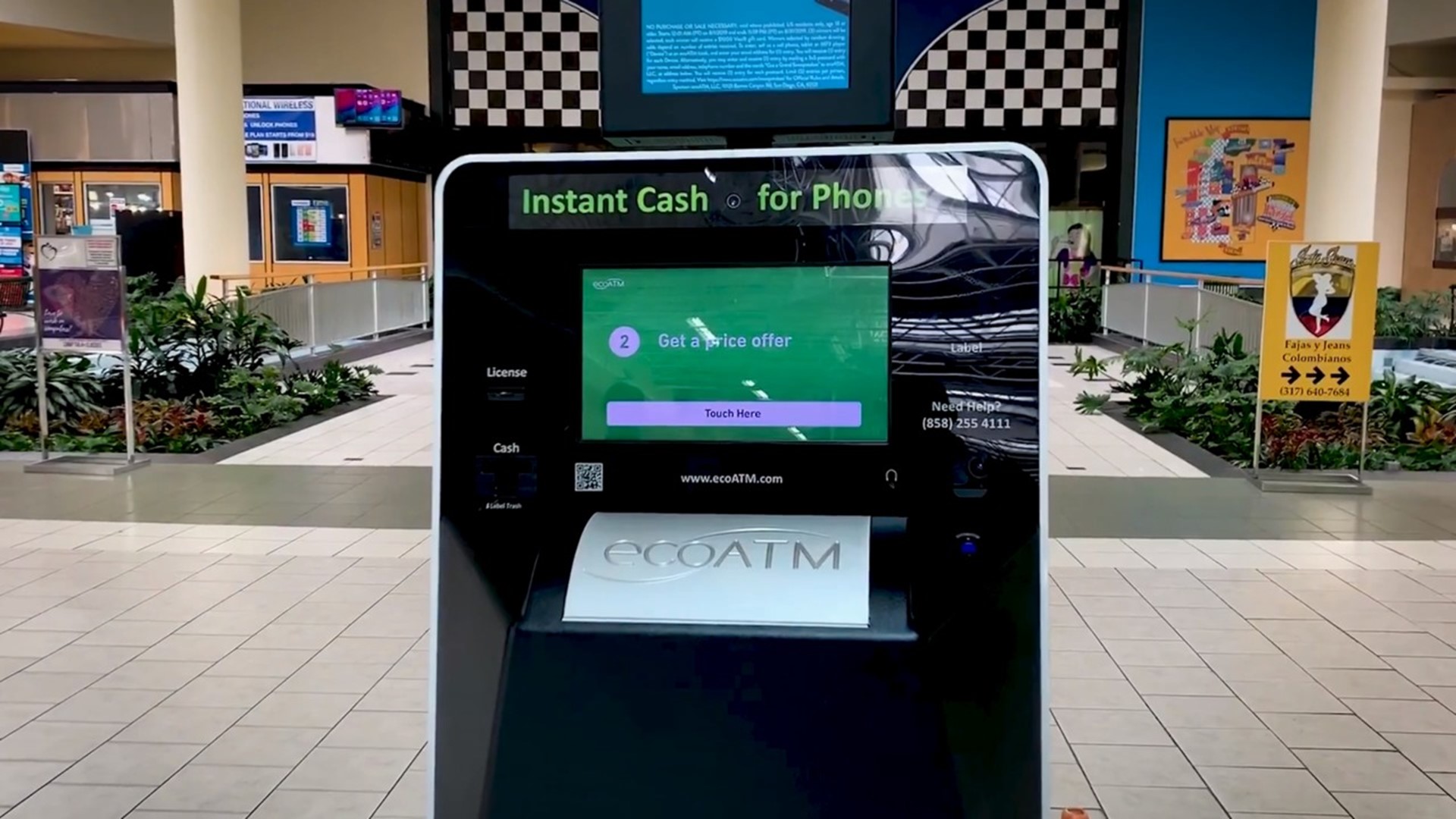 INDIANAPOLIS (WTHR) – When Abby Simpson discovered her cell phone had been stolen, she was understandably upset. When she tracked down where that stolen phone was dumped, that's when she became furious.

“I feel like this is just a way for criminals to make money at other people’s expense.”

“I feel like this is just a way for criminals to make money at other people’s expense, and I think everyone needs to know about that,” Simpson told 13 Investigates.

Simpson traced her phone to a kiosk at a local shopping mall. That kiosk, called an ecoATM, gives consumers an opportunity to recycle their old cellphones and, at the same time, to potentially walk away with some quick cash. But in Simpson’s case, someone else got the cash for a phone that had been stolen just minutes earlier.

13 Investigates has learned what happened to Simpson has also happened to other victims in central Indiana, prompting concern for some local police departments. Those law enforcement agencies are urging cellphone owners to take action right now if they hope to recover a stolen cellphone in the future.

How she found her stolen phone

If you see a lady in downtown Indianapolis walking a cat on a long leash, that would be Simpson. Her cat, Arnold, grew up in the country. When she and Arnold moved to a downtown apartment, Simpson learned daily outdoors walks helped the feline adjust to life in the city.

“He does so good down here. The cars don't bother him at all, and everyone comes up to talk to us. He’s a star,” she said.

Abby Simpson could hear her stolen phone buzzing inside the ecoATM. (WTHR)

Simpson was taking Arnold for his afternoon walk a few weeks ago when she discovered the cell phone she had put in her back pocket was missing. She looked on the ground where she had been sitting a moment earlier, and it wasn’t there, either.

“It was just gone. It got swiped very quickly,” she told WTHR.

Simpson contacted her boyfriend, who quickly activated the Find My iPhone feature on the cellphone. They saw the phone was less than a half mile away, so they rented a scooter to follow the phone’s signal down Pennsylvania Avenue and, eventually, to Circle Centre Mall. Inside the shopping center, Simpson pinpointed the phone to the ecoATM.

“I saw the kiosk and I said, ‘That's where my phone is!’" Simpson said. “I put my ear up to the kiosk and we called my iPhone, and you could hear it vibrating and the ringtone coming from inside. It all happened so fast.”

Founded in southern California ten years ago, ecoATM says it now has about 4,000 kiosks scattered across 48 states, including more than 50 ecoATMs in central Indiana. The machines are located in Kroger and Walmart stores and in several shopping malls.

The machines have bright displays that offer cash in exchange for your phone, and the company says it offers a fast, safe and secure transaction. Simply tell the ecoATM what type of phone you have, whether it works, and the condition. The kiosk then tests your device and, based on its perceived value, makes you an offer for your phone. Older phones that are inoperable can be recycled but likely will not translate into any cash. Newer models that are in top condition can fetch hundreds of dollars.

Simpson believes the prospect of fast money from an ecoATM made her iPhone 8 an appealing target.

“Just knowing you could get quick cash after selling something and it doesn't have to be your phone, it just invites criminal behavior,” Simpson said.

Her story is not unique.

The Indianapolis Metropolitan Police Department tells 13 Investigates it has traced at least 41 stolen cellphones to ecoATM machines in Marion County in the past four months.

IMPD did not want to discuss the matter on camera, but the department did invite 13 Investigates to meet with the unit that investigates stolen phones linked to ecoATM machines.

“It came on our radar screen in the past six to nine months, and it’s a fairly frequent thing -- several cases a week,” said Capt. Breck Terheide, who oversees IMPD’s pawn unit. “This is rife for fraud and a lot of it is just a crime of opportunity, so I don’t see it going away anytime soon.”

Cities like Baltimore and Riverside, Calif., have banned ecoATM machines after city officials expressed concerns that they encourage cellphone theft.

Contacted by WTHR about this story, company officials at ecoATM downplayed concerns about their machines, insisting that the popular kiosks do not result in increased criminal activity.

“We're not part of the problem. We're part of the solution,” said Kevin Harris, an ecoATM attorney who spoke with 13 Investigates via Skype. “Our security features prevent and deter theft from occurring in the vast, vast majority of cases.”

The "Safety first" scree on an ecoATM advising people of the security measures. (WTHR)

Harris said those security features include a requirement that anyone who wishes to sell a cellphone to ecoATM provide a photo ID at the time of sale, and that identification photo is compared with photos taken at each kiosk to make sure the pictures match. In states like Indiana, sellers are also required to provide a fingerprint. And Harris said ecoATM also checks the serial number of each device against a national database of stolen phones. If the phone that is about to be sold turns up on the list of stolen property, ecoATM says the sale will be declined.

“We’ve recycled our 23 million devices. A very, very small fraction of those devices has ever had to be recalled and sent back to law enforcement,” Harris said.

Chase Freeman, another spokesman for ecoATM, said when stolen phones do get accepted at a kiosk, they are held for at least 30 days, and police are granted access to security information collected at the machines.

“Those security measures we have in place are to not only protect consumers, but to help law enforcement in any ongoing investigation so they can not only bring justice, but return a phone or device to its rightful owner,” Freeman said.

Why is it still happening?

Despite ecoATM’s security measures, local police are still dealing with stolen phones at these kiosks on a weekly basis. They say the number of stolen phones inside the machines may be higher than reported, and figuring out just how many stolen phones can be traced to ecoATM units is nearly impossible.

“We have reservations about them,” said Avon Police Deputy Chief of Investigations Brian Nugent, whose department has been called to retrieve stolen phones from the two ecoATM machines in Avon. “On several occasions, we actually notified them that they unintentionally purchased an item that we can verify to have been stolen. I mean, to understand how many devices may have actually sold that were stolen, the truth is we may never know.”

Why do stolen cellphones end up inside ecoATM machines despite security measures designed to prevent fraud? The answer is all about timing.

“A lot of times when these incidents happen, the criminals are breaking into vehicles, they're stealing from purses, taking from people perhaps during a robbery, and they are immediately running to these locations to sell these items,” Nugent told 13 Investigates. “They're aware that they have to move quickly if they want to make a profit off a stolen item.”

In Simpson's case, her phone was sold to the ecoATM less than 45 minutes after it was stolen -- well before police could show up, let alone enter her serial number into a crime database.

No arrest or prosecution

While the security measures did not prevent Simpson’s phone from being stolen and sold to ecoATM, they did provide IMPD with a photo, fingerprint and state identification of the 40-year-old Indianapolis man who sold the phone inside Circle Centre Mall.

ecoATM says it has recycled about 23 million devices and that only a very small percentage have needed to be returned to law enforcement. (WTHR)

Fearful of retribution, Simpson chose not to pursue criminal charges, but she could have if she wanted to. Local police say most of the criminals who steal cellphones and sell them to pawn shops or ecoATMs are not prosecuted because victims either believe their phone was misplaced rather than stolen or, like Simpson, they decide not to file charges.

“I actually consider myself really fortunate because I was able to track it. I was able to notice it was stolen, and I was able to have time immediately to go find it. Most people can’t do that,” Simpson said.

Her quick action paid off. Several weeks after ecoATM purchased Simpson’s stolen phone, the company did send it back to her – along with a gift card for her troubles. IMPD says ecoATM has been very responsive when it comes to recovering stolen phones that detectives trace to their machines.

The most important number you never knew you had

Simpson likely would not have been able to get her phone back if she did not have access to a critical piece of information that most cellphone owners do not know: a unique serial number embedded into each phone.

That serial number is called an IMEI number.

So you need to find the IMEI number and write it down now, then put it in a safe place in case you need it later.

“Having that serial number for your device is incredibly helpful for law enforcement, and the sooner you can provide that number, the sooner we can begin to investigative,” said Nugent. “If we have a four- or five-day delay, that can lessen the opportunity we’re going to have to recover your property.”

Here’s how to find the IMEI number on your cellphone: