13 Investigates: Unemployment appeals stack up in Indiana with devastating consequences

Over the past 12 months, 13News has reported extensively on the state’s huge backlog of unemployment cases. 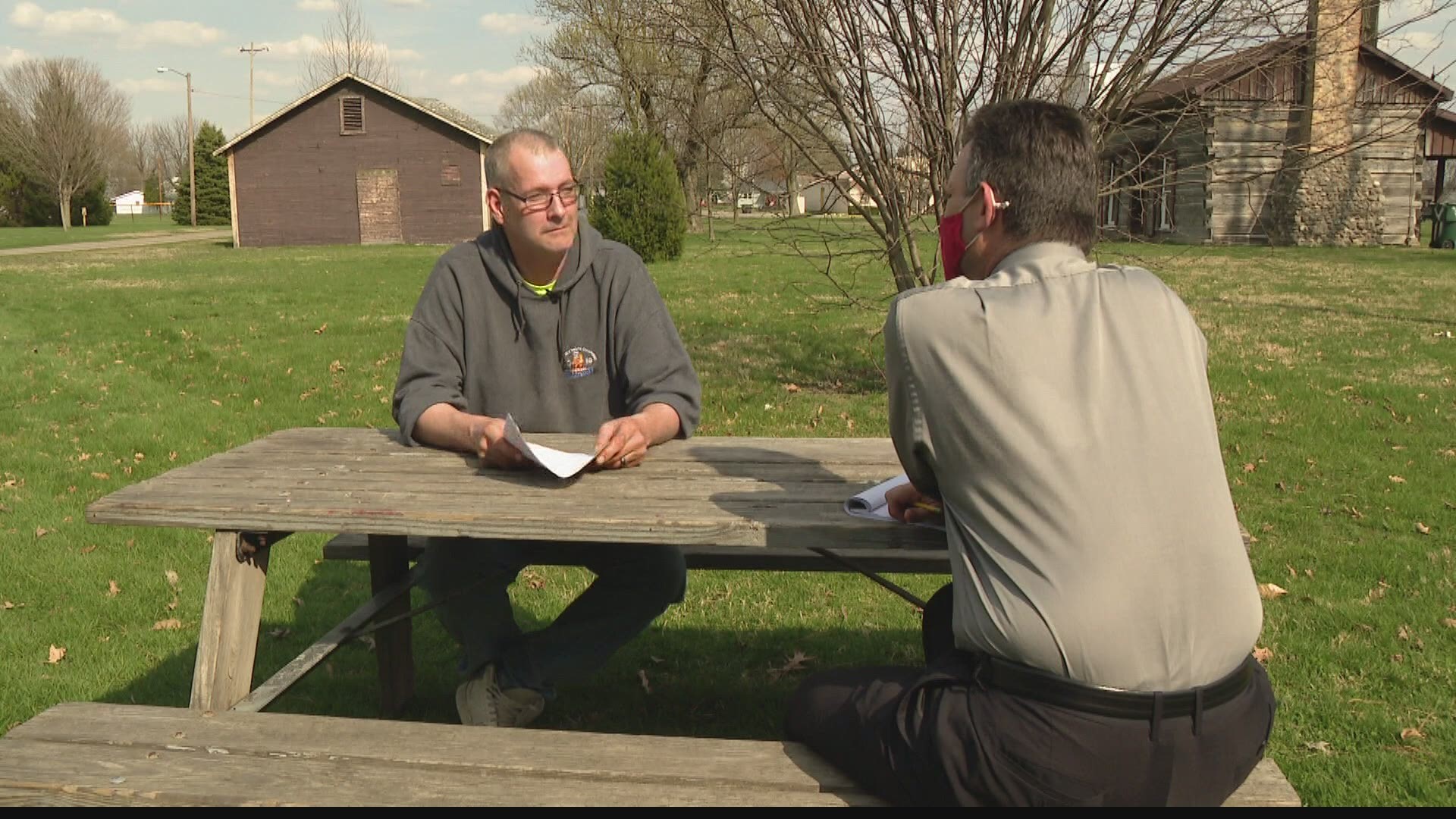 INDIANAPOLIS — Ron Gerstorff says the pandemic has been “living hell” for him and his family. The 55-year-old Muncie resident has been battling the Indiana Department of Workforce Development over disputed unemployment claims that are now more than a year old. The frustration and helplessness have been mounting.

“I thought about suicide. I’ll be honest,” Gerstorff told 13News. “I mean, what can I say? It takes a toll on you.”

Gerstorff is one of thousands of Hoosiers who have unresolved unemployment cases pending with DWD. In most cases, they have waited months — sometimes more than a year — to get the unemployment benefits they applied for during the pandemic.

Over the past 12 months, 13News has reported extensively on the state’s huge backlog of unemployment cases. You can read about the backlog and serious internal problems within state’s unemployment system here, here, here and here.

But Gerstorff and other laid-off workers are now facing a new backlog that has brought thousands of unemployment cases to a standstill. The latest crisis within DWD involves the agency’s appeal process, and 13 Investigates has learned Indiana is now dealing with more pending unemployment appeals than just about any other state in the nation.

Sleeping on a warehouse desk

Like many other Hoosiers, Gerstorff filed for unemployment last spring after the COVID-19 pandemic shut down businesses across Indiana. His hours were drastically cut at the Muncie Dragway, where Gerstorff works in the concession stand.

“I filed [unemployment] vouchers every week, just like they told me to, and I got unemployment for a few weeks. There wasn’t a problem at first,” he said.

Then Gerstorff applied for a job at a Walmart on the south side of Muncie while he waited for the racetrack to reopen. The company hired him quickly, but Gerstorff says the job lasted only two weeks before Walmart let him go without any explanation. He again filed for unemployment benefits and, this time, there was no payment.

After three months, DWD informed Gerstorff his request for unemployment benefits was denied. Unable to get an explanation from anyone at the state agency — Gerstorff says he tried repeatedly to call the agency but sat on hold for hours without ever getting a call center worker to tell him why his benefits were suspended — he filed an appeal in late August.

“And I didn’t have an appeal hearing until March 15 of this year,” he said. “August until March … they wouldn’t pay me a dime until I had a hearing. How do they expect people to wait that long?”

During that seven-month wait, Gerstorff said he couldn’t pay his family’s utility bills, medical bills and rent. When they were evicted from their home on Beacon Street, his wife and son went to live with family. Gerstorff moved into a old factory warehouse, where he spent several months sleeping on a desk.

In March, months of struggle and patience seemed to pay off when an administrative law judge finally heard Gerstorff’s appeal. A few days later, the judge issued a determination letter that largely ruled in his favor.

“At that point, I thought the hard times were going to end. I was optimistic,” said Gerstorff, who recalls a DWD representative telling him that the ruling meant he’d get all of his backpay deposited into his account within a few days.

The agency appealed the administrative law judge’s decision. Three months later, Gerstorff is still waiting for thousands of dollars in unemployment benefits that he says the state owes him. It’s during this time — when DWD failed to pay his PUA despite what appeared to be a successful appeal — that Gerstorff’s depression worsened and he started to have suicidal thoughts.

“I thought about it and I had it all planned out,” he said. “One day they tell you the money is coming. The next day they’re telling me now it could be four to six months before I see anything. Then they say I won’t get it at all. Everyday I get a different story from them people. How much is a person supposed to take?”

Gerstorff is among thousands of Hoosiers waiting for what feels like an eternity to get an appeal hearing with Indiana DWD.

Federal data obtained by 13Investigates shows Indiana has a larger backlog of unemployment appeals than nearly every other state. The numbers from the U.S. Department of Labor are staggering. They show:

State unemployment programs that fail to meet the federal regulations can lose their certification, resulting in the loss of millions of federal dollars. Due to the influx of appeals caused by the pandemic, the Secretary of Labor is unlikely to penalize states that are failing to meet the USDOL’s unemployment appeal desired level of achievement (DLA) standards.

The people battling Indiana’s unemployment agency and its appeal process say the system is simply broken.

“The system that was set up as a safety net is not working,” said Kristin Hoffman, an attorney at Indiana Legal Services and director of the Worker Rights and Protection Project. “There aren’t enough people within DWD to actually help people when they call in. A lot of claimants are getting a denial letter without ever having spoken to an investigator. We’re seeing most of our clients wait at least five or six months for an appeal. Some have been waiting for benefits for more than a year. The system is not supposed to work that way.”

Hoffman said her agency, which provides low-cost or free legal services to low-income Hoosiers, has experienced a 5,000% increase in unemployment compensation cases over the past two years. She believes DWD was “completely unprepared” to handle the massive increase in cases triggered by the pandemic and that “widespread and systemic failures” within DWD continue to cause tremendous pain and hardship for thousands of laid-off workers.

“Claimants are just sitting, waiting for something to happen on their case, and no one is communicating with them,” she said.

Her claim is backed by the scores of Hoosiers who each week visit DWD’s unemployment reception room at Indiana Government Center in downtown Indianapolis. It’s one of the few places Hoosiers can see a DWD staff member face-to-face. But the sign outside the waiting room makes it very clear: “Unemployment Actions Not Available at this Location [include] in person assistance with resolution of unemployment insurance claims.”

“It’s no hope. They’re basically saying there’s nothing they can do and it could take years for them to get to my claim,” a frustrated woman told 13News as she walked out of the DWD office pushing a sleeping baby in a stroller. She asked not to be identified for fear that DWD would retaliate by delaying her claims even further.

“Every week there is something wrong with my voucher, so I have to come down here to try to get things straightened out every single week,” said Willie Arberry Jr., another frustrated claimant waiting for his unemployment benefits. “And then you come down here and it can take hours to see somebody. It takes the whole day, and it stresses me out.”

Charlie Millier said he chose to come to the DWD office regularly because it was faster than waiting on hold for four to five hours to speak with an agent at the DWD call center. On the day he spoke outside the downtown DWD office with 13News, Miller was visiting because of an appeal hearing.

“Ten months before I finally got my appeal date today. Ten months!” Miller said. “It’s insane. Insane. I’ve never seen anything like this.”

“We’re seeing people wait more than six months to receive benefits at a time when they need them to get by, and we need our leadership to put more resources to the Department of Workforce Development to help all these people who are waiting months and months and months for their appeal to be heard,” Hoffman said.

13 Investigates has repeatedly asked DWD to discuss its delays. The agency has said it pays most unemployment claims within 21 days, but the most recent data obtained by 13News through an Indiana Access to Public Records Act request shows Indiana had approximately 2,576,000 unresolved claims that were still pending as of late April. DWD says the vast majority of those claims are under investigation because they show signs of potential fraud.

But fraud alone does not begin to explain why the state agency is still taking so long to get laid-off workers the unemployment benefits they desperately need, and why Indiana’s unemployment appeals process is still moving at a crawl.

“There has been a lot of fraud, but this is isn’t just about fraud, and that can’t be used as a blanket excuse,” said Hoffman. “This is really about an agency that was unprepared for the pandemic and still has not addressed failures in the system across the board. It’s just poor administration, and it means people can’t pay their bills. They can’t meet their basic needs. Some are becoming homeless. It really is devastating. They deserve better.”

In late March, after contacting DWD about Ron Gerstorff’s ongoing appeal with the state agency, a DWD spokesman told 13News, “We can only discuss the case if the claimant is willing to sign a waiver allowing release of information.”

When 13News obtained a signed waiver, the agency then changed its mind.

“It doesn’t surprise me. They won’t even give me information about my own case,” Gerstorff said. He is now getting legal assistance from Indiana Legal Services as he continues his 13-month battle with DWD.