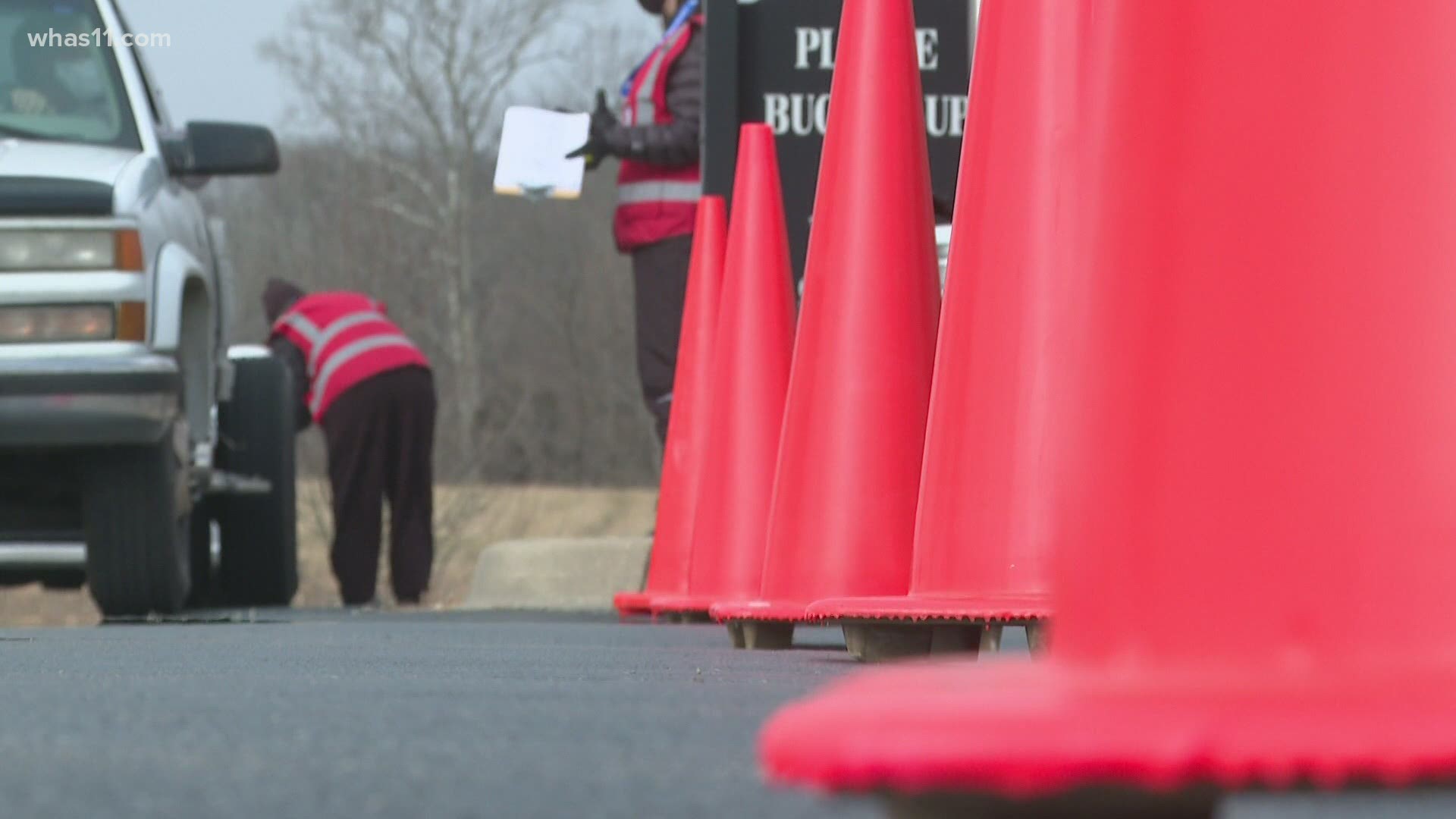 The opportunity to get the COVID-19 vaccine is growing, as Kentucky expands eligibility this week. Several new clinics are also opening up in Louisville's surrounding counties.

In Oldham County, 1,000 shots are now offered every week, compared to 200 previously.

"We know the vaccine is only effective if it's in people's arms," Oldham Co. Health Dept. Director Matthew Rhodes said. "It's no good sitting in freezers or refrigerators."

Rhodes said the health department is urging more people to sign up because it's finding appointments are not filling up.

"The urgency around the vaccine at first was great and obviously we had a scarcity of vaccine so the competition for the scarcity of resources was very intense," he said. "It's hard to believe just a few short weeks later that we do have open appointments."

Rhodes said as some "appointment shop", the health department has also seen cancellations and no-shows to vaccine slots.

"Ultimately as public health practitioners were concerned that the urgency around vaccines may be waning and it may be too soon. We certainly haven't gotten out of the woods yet," Rhodes said.

Rhodes said the reasons behind the waning interest may be multi-faceted. The county prioritized the most at-risk individuals for vaccination first and he believes everyone in that category who wanted the vaccine, has likely been vaccinated already

"People had such a challenge getting appointments early on that they decided it wasn't worth the effort that they were putting forward to try and get a vaccine," Rhodes said. "Secondly I think it's coupled with the fact the case counts have declined and people may not think it's necessary to get vaccinated."

If appointments don't fill up and the health department isn't able to administer 90% of its weekly doses within 7 days, it won't let the vaccines go un-used.

"We don't want to waste vaccine, we don't want to have vaccine sitting idle so if we determine that the appointments are not filling up in a timely fashion we will make sure that vaccine is sent to other locations," Rhodes said.

Other counties in the Lincoln Trail District Health Department region like Hardin and Nelson are noticing a similar trend.

"The reality is, it is a little bit more difficult to fill those vaccination appointments," public health director Sara Best said. "Now we've got to shift in to some of the populations that may be hesitant, that may not trust the vaccine, may have questions or concerns."

Best said it's a little bit of a "tougher sell" and the demand for vaccine appointments isn't quite meeting the supply now. The health department said to meet the gap, it's reaching out to different parts of the community.

"Those who might have financial issues, those who may have transportation issues, people of color. We want to make sure we're reaching everyone," Best said.

"Anyone who wants an appointment now, there's no reason they can't get one," Rhodes added.

Any Kentucky resident 18 and older is eligible to sign-up. The clinic will operate from 9 a.m. to noon, 1 p.m. to 4 p.m. and 5 p.m. to 8 p.m. Visit the website to schedule an appointment on the county's website.

Lincoln Trail District Health Department is running a new clinic offering the Johnson & Johnson vaccine on April 6 in Nelson County and April 8 in Hardin County. There will be 400 doses given out for each day, which will operate appointments from 8 a.m. to 4 p.m. To sign up, visit their website at www.ltdhd.org. It cuts off registration roughly 24 hours before the start of the clinic, usually around noon on Monday.

If you miss those clinic days, the LTDHD opens registration for its other vaccination appointments every Thursday. It reserves about 25% of appointments for those who are unable to access online registration. You can call 270-769-1601 to sign-up instead.

"We just want to strongly encourage everyone to continue seeking vaccine and everyone getting vaccinated so we can get back to normal as quickly as possible," Rhodes said.