The U.S. Travel Association pushed back on Fauci's comments, saying it supports getting vaccinated but believes there shouldn't be a mandate for domestic travel. 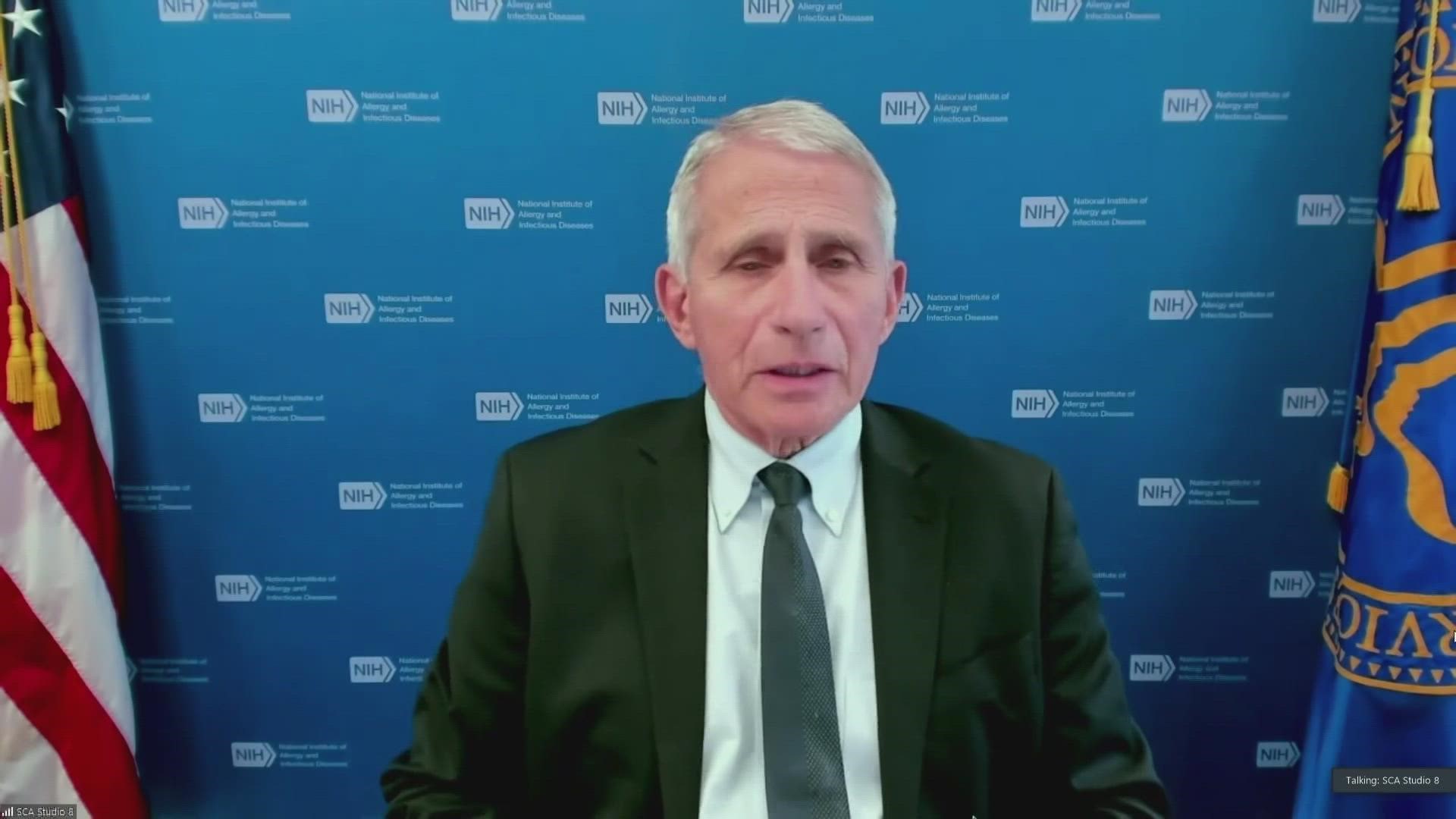 WASHINGTON — Dr. Anthony Fauci says he "would support" mandating that people be fully vaccinated against COVID-19 in order to go on a flight.

Fauci, the director of the National Institute of Allergy and Infectious Diseases (NIAID), made the comments in an interview posted to Instagram on Monday by The Skimm.

"If you want to get on a plane and travel with other people ... you should be vaccinated," Fauci said in response to a question on whether he'd support vaccine mandates for air travel.

In response to Fauci's comments, the U.S. Travel Association said while the organization supports people getting vaccinated, they have "long maintained that there should be no mandatory vaccination requirement for domestic travel."

"Such a policy would have an unfair, negative impact on families with young children who are not yet eligible to get the vaccine," the organization said in a statement.

The nation's top infectious disease expert told The Washington Post on Monday that he's supportive of a mandate, but isn't proposing one.

During the interview, Fauci also touched on a misunderstanding regarding vaccines and mandating them for children to go to school saying, "we already do that, and have been doing that for decades and decades." He went on to say, "it is not something new to mandate vaccines for school children."

Late last month, Fauci expressed his support for mandating vaccines for students returning to school. Fauci told CNN, "I believe that mandating vaccines for children to appear in school is a good idea." He said, "we've done this for decades and decades, requiring polio, measles, mumps, rubella, hepatitis" vaccinations.

Fauci said that while children under the age of 12 are not eligible for the COVID-19 vaccine yet, he told ABC News that there should be enough data by early October for the FDA to consider whether or not the shot is safe for that age group. The comments point to an early indication of when people 12 and under could start to see approvals coming down for the go ahead for shots in that age group.

Earlier this month, Fauci gave some indication on if Americans could expect to see booster shot approvals coming down, signaling that the meaning of being fully vaccinated could change to requiring an additional jab.

During a White House COVID-19 response team briefing, he pointed to a study out of Israel showing what he described as a “rather substantial positive impact’’ in people 12 or more days after being administered a booster shot of Pfizer's vaccine to protect against the Delta variant.

WHO Director-General Tedros Adhanom Ghebreyesus told reporters in Budapest, Hungary in late August that he was “really disappointed” at how vaccine donations worldwide had been panning out. He called for a two-month moratorium on administering booster shots for COVID-19 until global vaccine inequality could be sorted out, the Associate Press reported.

As the New York Times revealed Monday, at least two Food and Administration scientists are said to have pointed to "significant disagreement" between scientists at the agency and to officials in the Biden administration on the need for booster shots. A review published Monday, according to the Times, said that there was no data on coronavirus vaccines so far that gave credible evidence supporting the need for booster shots for the general public. =

The reporting in the New York Times also outlined the Biden administration's plans for a broad booster campaign for the fall, despite reported push back from at least some FDA scientists.

To add to that, the gap between the world's health leaders and the American public also appears to remain wide when it comes to support for vaccine mandates. As Forbes reported, a recent CNN/SSRS poll found that from early August until early September, among 2,119 adults polled in the U.S., 51% of those who responded "generally support vaccine mandates in public places."

A slightly higher, but still slim majority, coming in at 54% of adults who responded to the poll, said they support vaccine mandates for workplaces, as was reported by Forbes.

Florida Gov. Ron DeSantis said Monday that counties and cities in his state could potentially face millions of dollars in fines if they require their employees to get vaccinated for COVID-19, the Washington Post reported.

DeSantis has been at odds with leaders across Florida on mask mandates in schools and he has opposed the Biden administrations' sweeping order requiring employers with over 100 employees to require their workers to be vaccinated, or tested regularly, for the virus.