Jefferson County saw 9 new cases and no deaths were reported on Sunday. 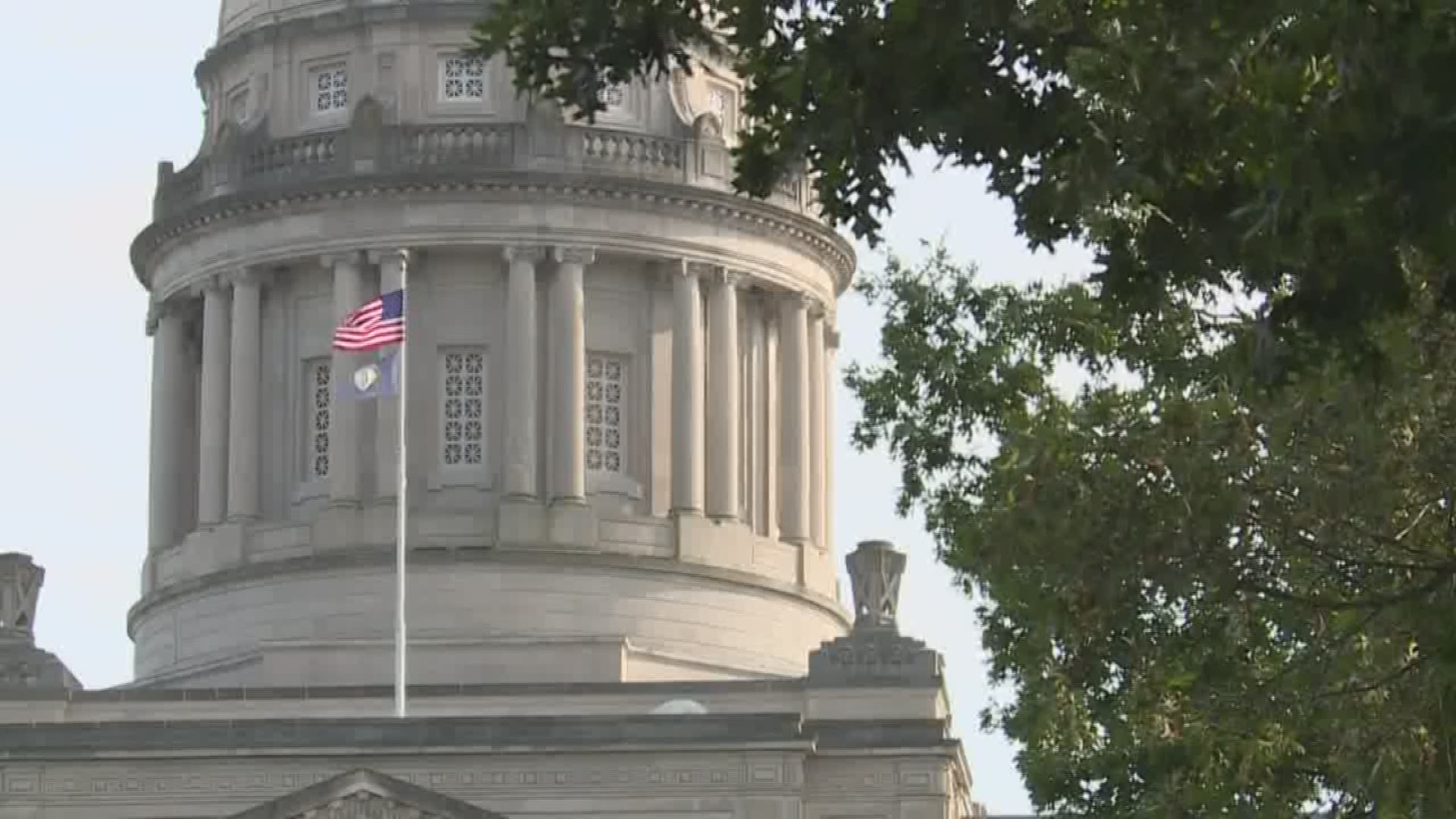 This blog will be updated daily with the latest information on COVID-19 in Kentucky. You can also see the newest stories in our Coronavirus section.

Beshear says there "absolutely are cases of coronavirus in every county." He says the numbers reported daily are inconsistent.

He says there have been more than 15,000 tests given in Kentucky and most have been negative. *We are not getting all the info we need from U of L Lab, but they aren't the only one. Communication with lab improving only "slightly."

Beshear says they are going to work with home improvement stores and the alleged overcrowding. "We're working on this tomorrow. If your store is too crowded for social distancing to be possible, you need to limit the amount of people coming in. If you see a store is crowded, don't go in, come back later."

Governor Beshear also called a bill "silly" that was introduced by Kentucky Representative Savannah Maddox. It would allow Kentuckians to sue the governor for restrictions put in place during the pandemic that impacted businesses.

"People can put an amendment that lets the whole world sue me. I used to be a lawyer, I can handle that. But I'm going to continue to do the right thing," he said.

Kentucky's Health Commissioner Dr. Steven Stack also said during Sunday's briefing the next few weeks are crucial as the state expects to hit a surge in cases soon. Gov. Beshear estimates more than 15,000 Kentuckians have been tested, but he said data on only about 5,500 tests have been reported back to the state.

Governor Beshear says 45 new cases of COVID-19 have been confirmed statewide, bringing the overall total to 439.

At press time, there were no new deaths.

"I'm frustrated and disappointed, a little bit angry to see people kind of putting their own self interests ahead of everybody else's," Fischer said.

Mayor Fischer said while every option is on the table right now, he asks the community not to drive the city to a point where it starts enforcing fines for those not adhering to guidelines.

Mayor Fischer confirms an LMPD officer has tested positive for COVID-19. He says the officer last worked a shift on March 25. LMPD is currently working to identify those the officer came in contact with.

Mayor Greg Fischer says Louisville now has 140 cases of COVID-19 in Louisville and Jefferson County. This is up 9 from Saturday's numbers.

“We’re seeing the increase in positive cases that we expected. Part of that is because we’ve increased testing,” Mayor Fischer said. “We’re not seeing the explosion of new cases that’s happening in New York and other parts of the country. But that could happen at any time.”

The mayor says too many people at golf courses aren't complying with social distancing.

"Please don't put me in a position to shut down our golf courses," he said.

The state has confirmed its 9th death due to COVID-19. Officials with the governor's office said the victim was a 66-year-old woman from Kenton County.

His office also says 64 people who have been infected with coronavirus are believed to have recovered.

Governor Andy Beshear has confirmed 92 more cases of coronavirus in Kentucky. This is up from 54 cases announced Friday evening.

He says among those new cases is a one-year-old in Fayette County.

Beshear also addressed people congregating in large groups at funerals and a social gathering Mayor Fischer addressed in his Saturday morning briefing. He's asking people to be mindful as the number of COVID-19 cases went up.

"Unless you're going to work, or the grocery store, you need to be home. It's your patriotic duty as a Kentuckiana to help stop the spread."

Governor Beshear estimates 15,000 tests performed have been performed statewide. He said that they’re still not getting most complete information from all independent labs reporting.

The state has received federal disaster designation from Trump. It will provide additional funding for the state’s response to the COVID-19 outbreak.

Beshear said he signed an agreement with the Department of Labor that provides the state to raise the maximum benefit by $600, increase benefit weeks to 13 additional weeks, fund unemployment insurance not typically eligible and allow the state to expand workshare programs.

Beshear is urging Kentuckians who qualify for unemployment to file a claim.

Beshear emphasized the importance of sticking to the social distancing guidelines and Healthy At Home measures which have been taken, especially in the coming days and weeks. As cases ramp up in other parts of the country, he wants Kentuckians to remain diligent in efforts to flatten the curve.

“I want us to think about their families. I want us to pray for them and their loved ones,” Gov. Beshear said. “And tonight we’re not only going to be lighting up Governor’s Mansion, we’re going to light up the dome of the Capitol green to show our compassion for those families. And I’d like everyone out there to do the same if you can.”

He warned Kentuckians against all travel, especially to neighboring states who have not taken the same precautions. He says doing so puts Kentuckians at risk and frustrates the efforts made by the state.

The unemployment website was reportedly telling some that they do not qualify for unemployment when they indeed do. They are working to fix the website. Those people will still be processed and no not need to reapply.

Beshear said he believes Kentucky has 1,352 ventilators and they are always working to get more.

Fort Knox confirmed a civilian employee has tested positive for COVID-19. The person is not a resident, and officials are working to contact individuals who may have been in contact with the patient.

The Oldham County Health Department has confirmed two additional cases of coronavirus in the county. A male in his 40s and a female in her late teens tested positive. OCHD are contacting people who may have come in contact with those who have confirmed cases.

Mayor Greg Fischer said Louisville saw its biggest one-day increase in cases so far, with 43 cases in the past 24 hours. There are now 103 positive cases in Jefferson County.

Fisher also reported an additional death, though said he did not know the person's demographics.

Kentucky Attorney General says abortions should cease as part of the governor's order halting elective medical procedures due to the coronavirus pandemic. He made the request  to the state's acting health and family services secretary.

“Today, I’m calling on CHFS Acting Secretary Eric Friedlander to certify, pursuant to KRS 15.241, that Kentucky’s abortion providers are violating his ban on elective medical procedures during the COVID-19 pandemic by continuing to perform abortions. Kentucky’s current ban on elective medical procedures exists to further the mandated policy of social distancing and to help conserve medical resources for use in fighting COVID-19.

Acting Secretary Friedlander is on the front lines of fighting the COVID-19 pandemic, and I am confident that he understands, better than anyone, the necessity of ending abortion procedures during this health crisis. His certification will immediately trigger action by our office to stop elective procedures during the pandemic.

Abortion providers should join the thousands of other medical professionals across the state in ceasing elective procedures, unless the life of the mother is at risk, to protect the health of their patients and slow the spread of the coronavirus.”

Kroger has confirmed an employee at its Campbellsville Bypass store has tested positive for COVID-19. The employee is receiving medical care and is recovering, and the store remains open.

Kentucky lawmakers passed a coronavirus-relief bill. The goal is to help workers and employers suffering economic damage from the pandemic.

During the governor's daily press conference he announced 50 new COVID-19 cases in the state, bringing the total to 248. There have been no new deaths.

He said one patient who was believed to have the virus is a 90-year-old man in Perry Co., Ky. who was staying in a nursing home. The man was moved from the facility as a precaution. Following the announcement, the governor clarified that the man tested negative for the virus.

The governor urged county judges and mayors to closely monitor parks other areas where people tend to congregate and shut it down, if they see people not following social distancing guidelines. He mentioned Louisville Mayor Greg Fischer's efforts as an example of what to do.

Beshear did not have an update on drive-thru testing as he had hoped. He said he needs a few more days.

Case information
As of 5 p.m. March 26, the Governor said that there are at least 248 positive cases of COVID-19 in Kentucky, with 50 of those being newly confirmed. There have been five deaths attributed to the virus. In very good news, after further review the 90-year-old Perry County nursing home resident has tested negative.

Team Kentucky Fund
Gov. Beshear, along with the Kentucky Public Protection Cabinet (PPC), took executive action to establish the Team Kentucky Fund, a GoFundMe-style online platform to provide financial help to Kentuckians whose employment is affected by the coronavirus. The Governor challenged those who are able to help to make a tax-deductible donation to the fund.

Gov. Beshear announced the COVID-19 Reporting Hotline (833-597-2337) that will investigate complaints about non-compliance with coronavirus mandates. Labor Cabinet personnel will monitor the hotline from 7:30 a.m. to 9 p.m. ET. A new website where Kentuckians can visit to make online complaints is kysafer.ky.gov.

Mayor Greg Fischer said there are 60 positive cases of COVID-19 in Jefferson County, that number is double the amount of cases Louisville had on Tuesday, March 24.

Dr. Sarah Moyer with Department of Public Health said it has taken people longer to recover from coronavirus than other illnesses, but the average hospital length of stay in Kentucky is around two days. Louisville hospitals have plenty of capacity at this time, Moyer said.

An individual at Fort Campbell has tested positive for coronavirus, the Army installation confirmed.

The person who tested positive was a dependent of a military retiree at Fort Campbell and is in isolation away from the installation. Those who could be at-risk will be directly notified.

The closures will begin immediately, however, CDI is taking steps to limit the impact of its employees by continuing to provide health, dental, vision, and life insurance benefits.

Salaried employees across the company will receive a salary reduction.

The district said there is around 20,000 masks, eye protection and gloves that have been in storage since the 2009 H1N1 epidemic. JCPS will load all of the PPE and deliver it to the Louisville Metro Department of Public Health to distribute to local health care providers.

“I respectfully urge you to promptly consider this request by Governor Beshear. Additionally, I ask that you work to expedite delivery of the 100,000 test kits and 5,000 swabs that have been requested by the Commonwealth of Kentucky,” Sen. Paul said in the letter.

You can see previous updates here.