The governor says this is the highest number thus far. 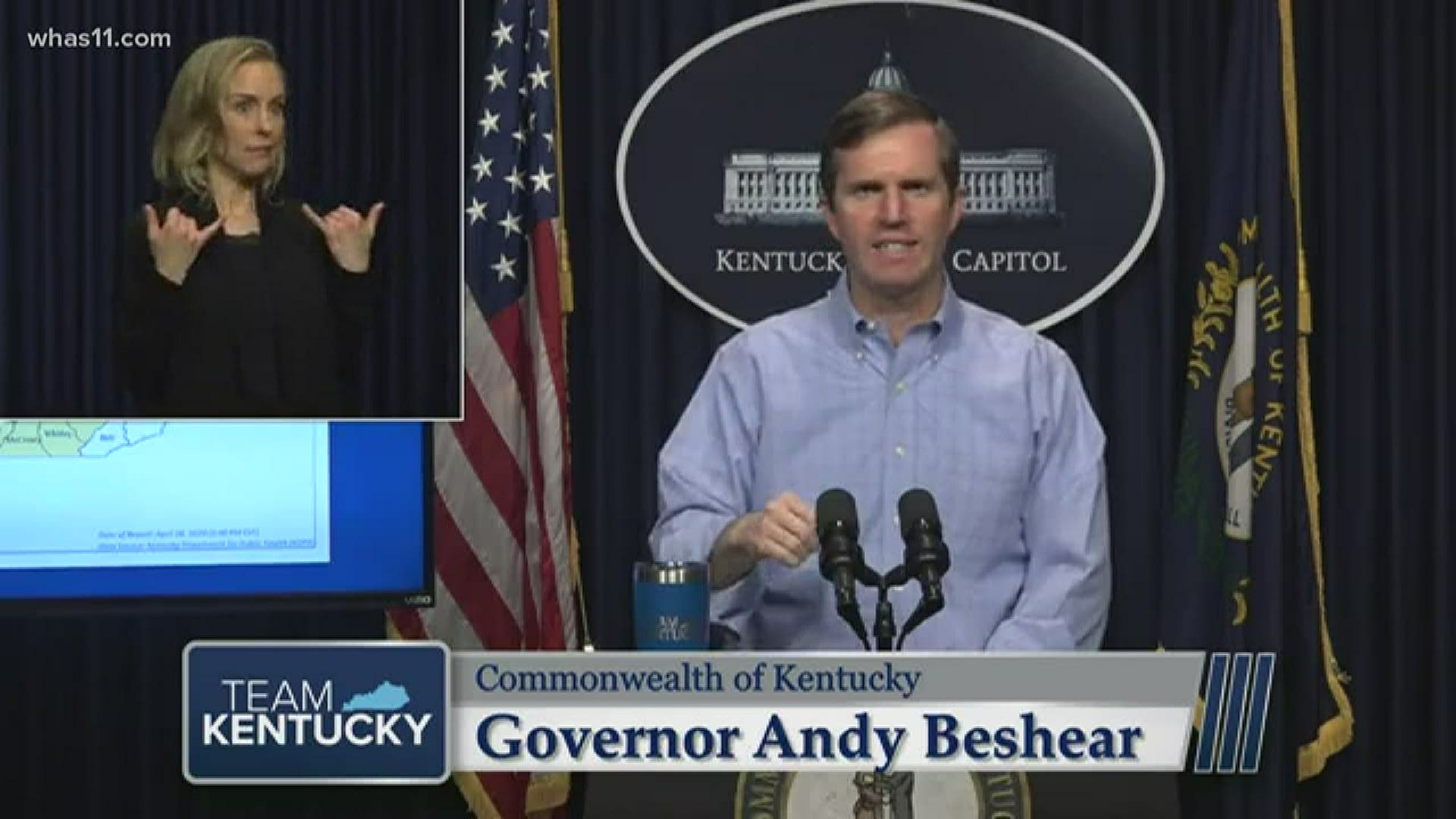 Beshear says the number of cases and fatalities continue to grow in long-term care facilities. He confirmed 33 more residents and 8 staff have tested positive. Four more residents have died. Beshear continued in saying 46 facilities have cases of COVID-19.

Beshear confirms 273 new COVID-19 cases, the state's highest total yet. Jefferson County accounted for 129 of those. This brings the overall total cases of coronavirus to 2,960.

He also announced four new deaths which totals 148 so far.

New testing sites for the following areas will start Tuesday at 8:30 a.m.

Gov. Beshear is urging those who need the testing to sign up.

As of Sunday, there have been 890 confirmed cases of COVID-19 in Louisville, with 363 recoveries. There have been 2 additional deaths since Saturday, bringing the Louisville total to 66.

Acting secretary of Kentucky Cabinet for Health and Family Services Eric Friedlander says a new task force has been created to help long-term health facilities, some of the most vulnerable spaces for COVID-19.

He says they have created an action plan.

The governor says 32,225 people have been tested.

Governor Andy Beshear said there have been 1,008 people ever hospitalized, and 360 people currently hospitalized. There are currently 227 people in the ICU. Both current hospitalizations and ICU beds are down from the previous day.

In total, 979 people have recovered. The now 11-day-old baby from Lincoln County diagnosed with coronavirus is at home, and Beshear said it is doing better.

The average age of Kentucky's coronavirus patients is 52.

310 people in Jefferson County have recovered from COVID-19.

The mayor announced 380 metro government employees will be furloughed. According to the mayor, some of the positions included in this will be school crossing guards and library employees. The furloughs will start May 3.

Norton Healthcare has created a call center which will work closely with long-term care facilities in the area to help with infection prevention, PPE, employee health and more.

Kentucky has 159 new cases, totaling 2,429 positive COVID-19 cases in Kentucky. One of the new cases is a 10-day-old in Lincoln County, Governor Andy Beshear said.

Seven more people have died. Beshear said that while the number is less than the previous day's, state leaders believe tomorrow will be highest numbers they have ever seen.

Beshear said the state will have four new testing pop-up sites next week in Madisonville, Paducah, Somerset and Pikeville.

The goal, Beshear said, is to test 1,000 people at each site. People in counties near each place can also test at the sites. Sites will be open from 8:30 a.m. to 5:30 p.m. To register for a test, visit krogerhealth.com/covidtesting.

Beshear also said the state will work with Illinois, Michigan, Minnesota and Wisconsin in addition to Indiana and Ohio in working to reopen state economies.

Louisville Mayor Greg Fischer says there are 34 news confirmed COVID-19 cases in Jefferson County and 2 more deaths. Those new numbers bring the total cases to 721 and total deaths to 57. The two who died were a 78-year-old man and another person in their 90s.

The mayor said the field hospital at the Expo Center is "ready to go" with 250 beds available if needed.

There are now 2,291 total cases in Kentucky, though Gov. Andy Beshear said they know at least 50 positives are not included in that number.

Seven more Kentuckians have died. Beshear said Kentucky is still increasing, and has yet to reach its peak.

The state is partnering with Metro Louisville, the University of Louisville and Christina Lee Brown Envirome Institute for a "co-immunity project." The project will test antibodies to not only see if people have developed immunity, but can help Kentucky's sickest patients.

Beshear announced he is working with governors from Indiana and Ohio to come up with plans to reopen their states together. He said he would speak more on their plan during Friday's briefing.

The governor's press conference was interrupted by protesters outside the capitol wanting to "reopen Kentucky." Beshear said that cannot be done as more people will die.

Jefferson County has 687 confirmed cases of COVID-19 and reported 6 more deaths, bringing the total to 54.

After the announcement of the upskilling program, more than 2,000 people in Louisville signed up with Future of Work Initiate to learn data skills.

LHome has approved $346 thousand in small business continuity loans since April 6. In an effort to raise more money for the small business loan continuity program, the mayor announced a match grant challenge to raise $500 thousand for the program. To donate, sign up for the Grind 5K or visit lhomeky.org.

Deaths included in the count are 3 in Jefferson, 2 in Kenton, 2 in Campbell, and one in Laurel, Lincoln, Jackson and Adair Counties.

Beshear said the Adair County death was a 50-year-old woman who was a med-tech at a nursing facility. It's the first known death of a nursing home worker in the state.

Officials say the top reasons one may not have received an unemployment payment are:

Beshear breaks down PPE on hand:

Dr. Stack held up a letter from Vice President Mike Pence. He said the letter requires the state report supplies on hand at each individual facility, daily to be able to receive more supplies. Dr. Stack says it’s been challenging to be successful.

More drive-up testing sites will be announced on Thursday via the partnership with Kroger. The Frankfort location tested 97 patients on Monday.

Beshear announces the #TeamKentucky fund designed to help families impacted financially by COVID-19 has received a $1 million donation from the Kentucky Colonels.

Beshear says there are cases in every county, whether the map shows it or the state has confirmed them.

Credit: kycovid19.ky.gov
A map showing the counties with COVID-19 cases

In a month, the One Louisville fund has raised over $8.2 million to help relief efforts in Louisville related to the coronavirus outbreak. $3.4 million of that has already been distributed.

Mayor Fischer said flags should be flown at half staff.

Beshear says 87 positive cases have been confirmed bringing the statewide COVID-19 total to 2,048. He also confirmed 7 new deaths and that overall total now stands at 104.

Beshear says 26,683 Kentuckians have been tested. There are currently 136 in ICU and 629 have recovered from the virus.

Beshear says flags will fly half-mast for a week to honor the victims.

Gov. Beshear says the National Guard is continuing their work on the field hospital at the fairgrounds in Louisville. There are now 250 beds set up there and will be used for those who need to leave their nursing home and those who aren’t sick enough to be hospitalized but too sick to be at home.

Louisville Mayor Greg Fischer gave an update on positive cases and deaths in Jefferson Co. over the past two days. He said there are now 569 positive COVID-19 cases and five more deaths.

Mayor Greg Fischer announced a new program offering training online to help Louisvillians impacted by COVID-19. The Future of Work Initiative powered by Microsoft is offering self-paced data skills training for free. Participants will have a chance to win prizes by earning badges and certificates.

RELATED: New program aims to teach data skills to those impacted by COVID-19 in Louisville

According to the Louisville mayor's office, an employee of Treyton Oak Towers who tested positive for COVID-19 has been fitted with an ankle bracelet after the Department of Public Health and Wellness sought an order for enforced quarantine. The department repeatedly attempted to contact the employee to make sure they were in self-isolation. The employee was informed they tested positive for the virus. After a home visit in which it was clear someone was  home but not answering the door, the department sought the order for forced quarantine.

Coronavirus concerns may delay the trial of Gabriel Parker who is accused in a deadly school shooting in Marshall County, Kentucky in January 2018. Two students were killed and 14 were injured in the shooting. According to the Associated Press, news outlets report the prosecutor and defense attorney cited the virus in a Skype hearing on Monday as a reason to delay the trial which is set to begin June 1.

RELATED: VERIFY: Sanitize your cloth masks in the washing machine, not the microwave

RELATED: Sale of Derby merchandise to help those impacted by coronavirus

RELATED: How to meditate if you have never tried before