Gov. Andy Beshear said the positivity rate will be higher and expects to release that new number on Monday. 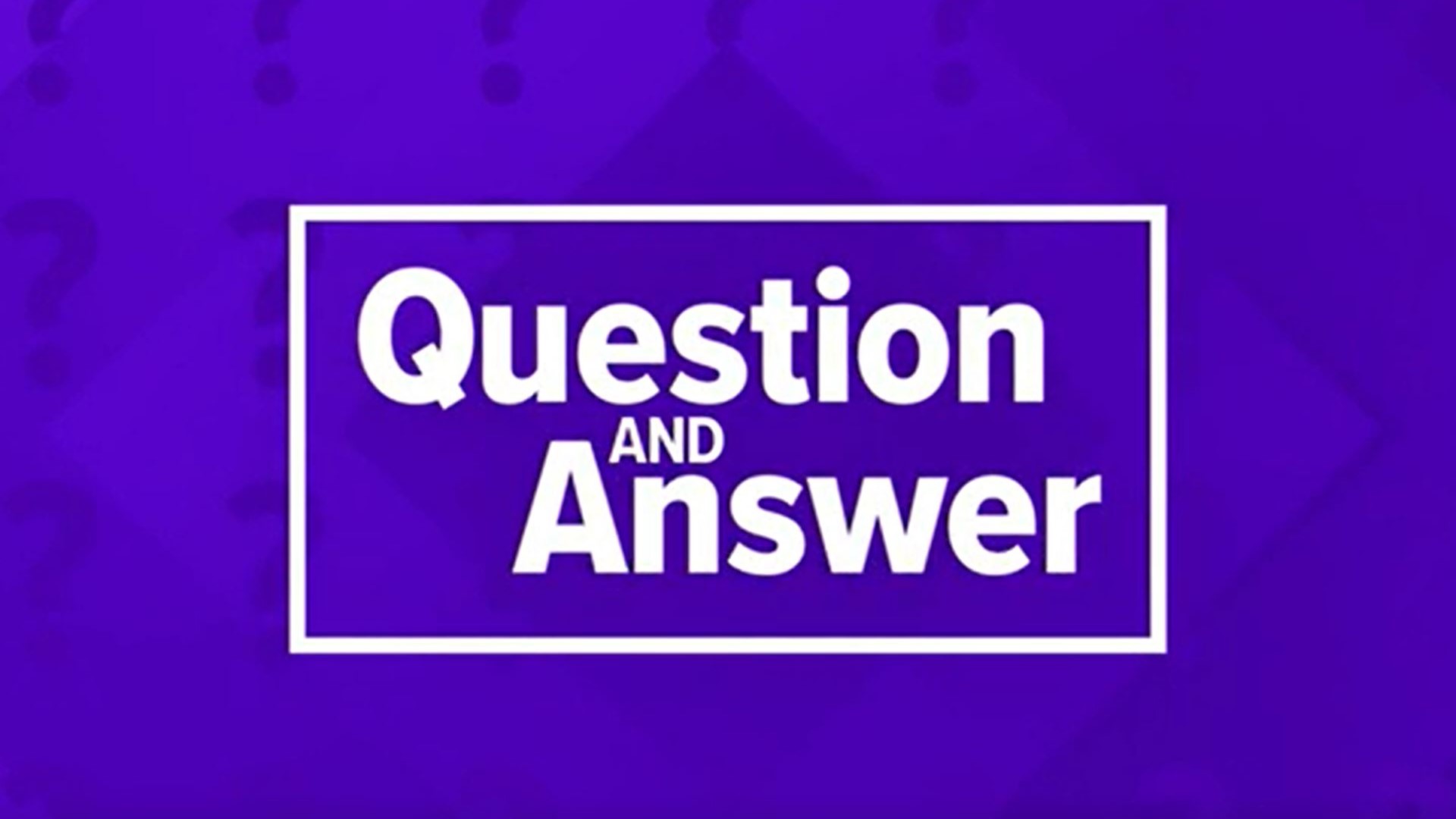 This is a liveblog with real-time updates on COVID-19 in Kentucky. Gov. Andy Beshear is expected to give updates every day at 4 p.m.

He said Kentucky ended the week with 330 fewer cases than last week and it’s attributed to people wearing face coverings and masks.

However, the governor said the state’s positivity rate will be higher as a sign the virus continues to spread throughout the Commonwealth. He's expected to make the announcement on that number on Monday.

Nine of the new cases were found in children 5-years-old or under.

One death was reported Sunday, a 71-year-old man from Pulaski County. Kentucky has lost 773 to the virus.

Overall, Kentucky has 34,982 confirmed positive cases of the virus.

Gov. Andy Beshear has confirmed 801 new cases of COVID-19 in Kentucky, bringing the total of reported cases to 34,578.

“Today is a tough day in our fight against COVID-19,” Gov. Beshear said in a statement on Saturday. “I know we are slowing the growth of this virus in Kentucky, but it’s still aggressive. We simply need to do better.”

Twenty-nine of the newly reported cases were found in kids from 5-years-old and under.

Officials also reported another 8 deaths due to the virus, bringing the total to 772 lost to the virus.

“COVID-19 has hit us hard, “but we are not powerless,” Dr. Steven Stack, commissioner of the Department for Public Health, said. “We have shown repeatedly that our individual actions will determine our future. Will you continue to wear a face covering? Are you keeping at least six feet distance between yourself and others? Are you washing your hands frequently? And, if you receive a call from a contact tracer, will you answer? If each of us answers ‘Yes!’ through our actions, we can keep Kentuckians safe and keep Kentucky open. Together, Team Kentucky can contain the coronavirus.”

In total, there have been at least 33,796 coronavirus cases and 764 deaths. The state's positivity rate currently sits at 5.57%.

Gov. Beshear is expected to make an announcement on guidance for bars and restaurants Monday.

“Expectations ought to be that capacity will increase again to 50%, but there will be some changes," Beshear said during his Thursday press conference.

The governor said 12 children under 5-years-old have tested positive, including a baby that is 10 months old.

Eight new deaths have been reported in the state raising the total to 760 Kentuckians lost to the virus.

“We’ve had major wars that we’ve gone through, at least in the last 40 years, where we’ve lost fewer Kentuckians than those who we’re going to lose to Covid-19,” said Gov. Beshear. “So let’s remember that just because we don’t see numbers like New York had or Florida is going to experience, that doesn’t mean this isn’t hitting Kentucky really hard.”

The positivity rate is the same from Wednesday which is 5.51%.

Unfortunately, 10 DOC inmates have died from complications due to the coronavirus.

For more information, go to drive.ky.gov.

Pharmacy Refills Update
Buckner also announced that Gov. Beshear signed an executive order extending previous orders allowing pharmacists to dispense 30-day refills. This order will be in effect until Sept. 5 and is subject to renewal.

“Pharmacists in any Kentucky county can dispense emergency refills for up to 30 days on medicines that are not controlled substances to residents of any Kentucky county,” said Buckner. “You can get multiple 30-day refills. The order allows people to be healthy at home and still get the medicine they need.”

Price-Gouging Update
In addition, Buckner announced that Gov. Beshear signed an executive order prohibiting price gouging, extending a previous order. This order will remain in effect for the duration of the state of emergency.

“The order protects Kentuckians from those who would take advantage of the pandemic by charging inflated prices for goods – goods like hand sanitizer, soap, cleaners and disinfectants,” Buckner said.

Expanded COVID-19 Testing
Gov. Beshear continues to encourage all Kentuckians to take advantage of coronavirus testing being offered at more than 200 locations across the commonwealth.

“Every city and county in Kentucky should have reliable wastewater and sewer systems,” said Gov. Beshear. “I’m glad these five cities can make necessary updates and provide more reliable service to their communities.”

Department for Local Government (DLG) Commissioner and KIA Board Chairman Dennis Keene mentioned how important these projects are for local communities.

“Our purpose is to provide resources to local governments so they can better serve everyone in the commonwealth,” said Commissioner Keene. “Today’s projects will provide better resources and service to more than 12,000 Kentuckians.”

Bardstown
The City of Bardstown was approved for a $1,472,400 Fund B loan for improvements to the wastewater treatment system. Upon completion, the Corman’s Crossing, Royal Crest and American Greetings pump stations will be updated to increase capacity. The city will use the loan to add new controls and valve vaults, convert to wet pit submersible pumps, upgrade access roads and add an emergency generator. Upgrades will allow stations to meet current and anticipated demand and will make stations safer by reducing confined space entry hazards. The project will better serve 8,000 Kentuckians.

“We are pleased to get approved for this KIA loan, which will help us renovate and update the sewer system that serves the western part of Bardstown and the Nelson County area,” said Bardstown Mayor J. Richard “Dick” Heaton. “It will allow for more industrial and residential development in that portion of our county to help meet the increased demand for services.”

Calvert City
The City of Calvert City was approved for a $2,908,500 Fund A loan for the wastewater treatment plant influent lift station and plant improvements project. The city will use the loan to rehabilitate the existing system, which will improve disinfection, aeration, and mixing systems. Upon completion, the project will provide a better, more reliable service for 1,700 households.

Dawson Springs
Dawson Springs was approved for a $1 million Fund A loan to make clarifier improvements to the wastewater treatment plant. This project will improve sewer lines and reduce inflow and infiltration. Upon completion, the city will better serve 800 sewer customers and 950 water customers.

“Our storm sewer is one of our biggest problems and this project will remedy that so our capacity can go back up to where it should be,” said Dawson Springs Mayor Chris Smiley. “The facility is roughly 35 years old and desperately needs an upgrade. We are fortunate to get this loan and other funds so we can move forward and get this project going.”

Lewisburg
Lewisburg was approved for a $750,000 Fund A loan to rehabilitate approximately 2,650 linear feet of sanitary sewer line and 14 manholes in the city’s collection system. Upon completion, the project will decrease sanitary sewer overflows and improve services for 360 households.

Whitesburg
The City of Whitesburg was approved for a $1.1 million Fund F loan to replace two water tanks, which will increase storage and improve the water system. The updates will better serve 1,400 households and will allow the city to wholesale water to the Letcher County water and sewer district.

“I am absolutely delighted that KIA decided to help us with these water tank replacements,” said Whitesburg Mayor James Craft. “They are outdated, leaking, and costing the city money. And now we can use this loan to replace them and be on our way for another 20 to 30 years. This is a major step for our city.”

The governor said 21 children under 5-years-old have tested positive, including a baby that is only 18 days old. That baby is not hospitalized.

One death has been reported in the state with a total of 752 deaths in Kentucky.

The positivity rate is up a quarter of a percent from Tuesday bringing it to 5.51% which is higher than we need it to be according to Gov. Beshear.

The funding, part of the CARES Act, is from the Federal Transit Administration. KYTC will distribute it in grants to 16 public transit agencies serving 79 counties across Kentucky. It will cover an array of operating costs including security and disinfection equipment, electronic ticketing, office equipment, and supplies and transit vehicles, among others.

“Thousands of our fellow Kentuckians depend on public transit for daily transportation. It’s how they get to doctor appointments, jobs, the grocery, and other essential locations,” Gov. Beshear said. “These transit agencies and their employees are on the front line in our battle against COVID-19.”

The newly announced grant is for $6,413,177. It follows an initial round of CARES Act transit funding totaling $22.9 million in May. There is a wide range of eligible operational expenses, including purchases of fuel and procurement of personal protective equipment such as masks, gloves, disinfectant wipes, disinfection services, and protective barriers between drivers and passengers.

Norton Healthcare has added a community drive-thru COVID-19 location to help with the need for tests.

It will take place at the Respiratory Illness Training Center at 3101 Poplar Level Road.

You must make an appointment which can be scheduled online by visiting NortonHealthcare.com/RITC or by dialing (502) 861-4611, option 1.

The governor said 18 children under 5-years-old have tested positive, including a 2-month-old baby.

Seven deaths were also reported in the numbers with three of them from Jefferson County, which includes a 45-year-old woman.

Even though the positivity rate dropped a tad on Monday, it did rise a bit to 5.24%.

Health officials also said the city has a 7.45% positivity rate, with over 98,000 people tested since the start of the pandemic. 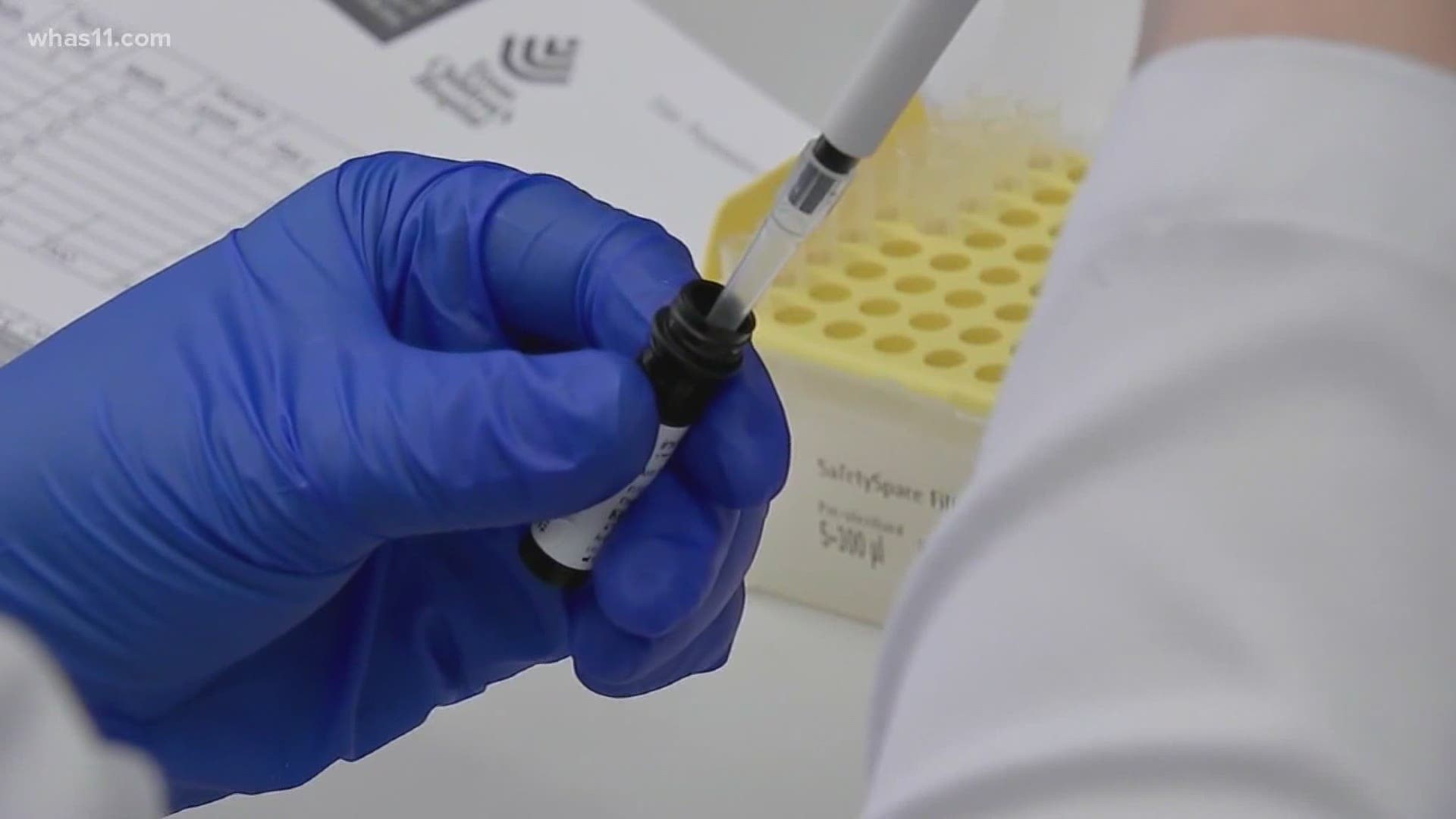 State officials have announced a new partnership to conduct coronavirus testing in the Louisville area.

Gov. Beshear said UofL HealthCare will replace some of the Kroger sites that recently closed. The locations are in downtown Louisville, South Louisville and Bullitt County.

Funding from the state is covering the cost of the testing, so it is FREE to community, but appointments are required.

The locations addresses are:

The governor said they plan to announce a partnership with the University of Kentucky for the Lexington-area in the coming days.

Beshear said 12 kids under the age of 5 have tested positive with a 2-year-old reportedly the youngest confirmed Monday.

The governor also reported two new deaths, bringing the total lost to the virus at 744.

Positivity rate has dropped to 5.18%, down from a week ago.

Gov. Andy Beshear says the state is starting a new social campaign to encourage use and the importance of wearing masks. He's urging everyone to use the #MaskUpKy hashtag.

Baptist Health announced they passed a testing mark of 100,000 in Kentucky and southern Indiana combined. As of July 31, Baptist Health had performed 102,013 tests.

“Testing has been, and continues to be a challenge since the early days of COVID-19 in our communities,” said Gerard Colman, Baptist Health system CEO. “But throughout, Baptist has used all of the resources at our disposal to help address the issue of testing across all of the areas we are privileged to serve. Testing allows us to identify patients with COVID-19, a crucial step in keeping them, and our caregivers, safe."

The Kentucky Department for Public Health reported 621,206 tests had been performed overall in the state as of July 30. Baptist Health said, based on these numbers, their percentage of testing across Kentucky is nearly 15%