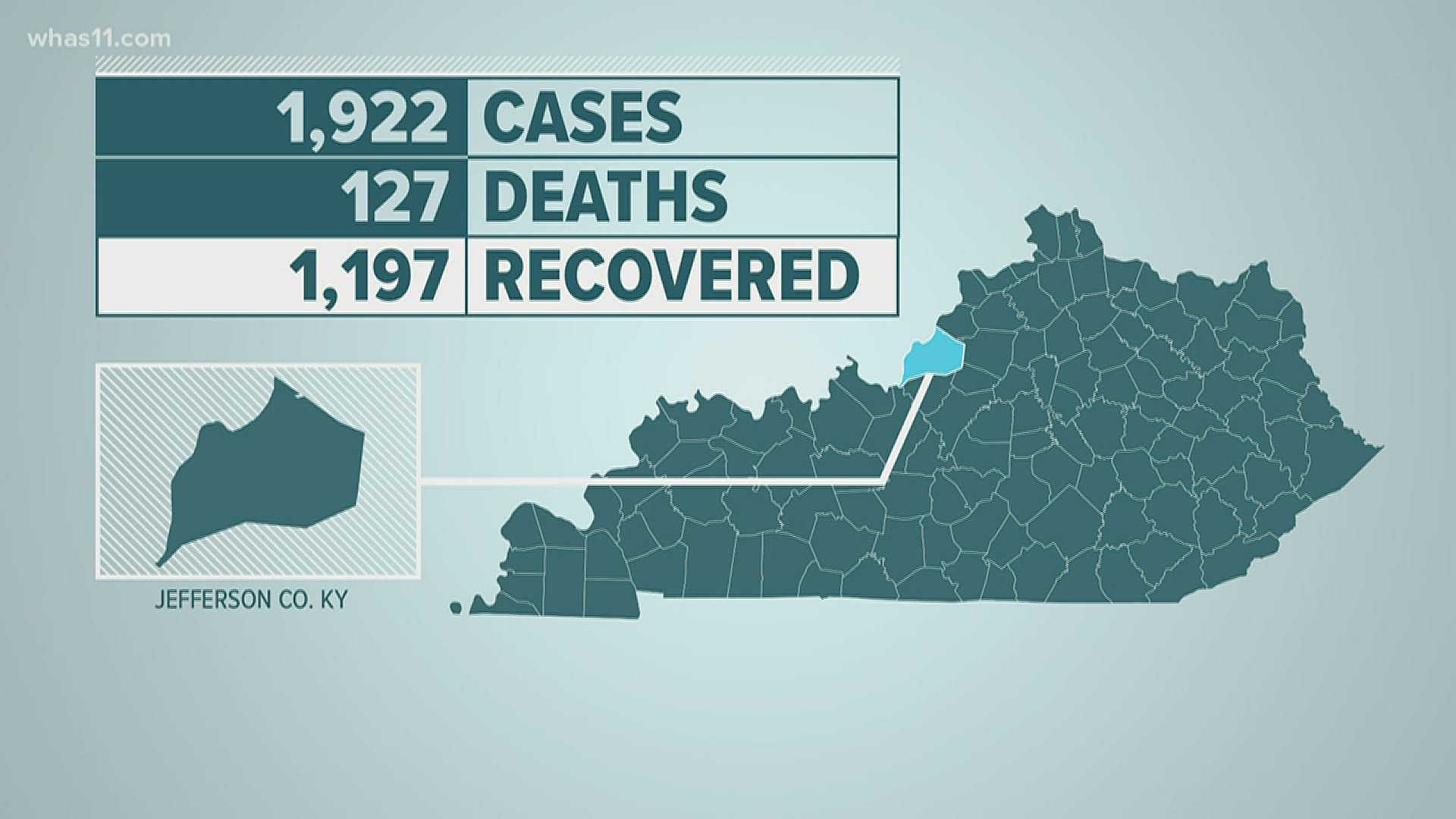 Mayor Greg Fischer has confirmed 13 new cases of COVID-19 in Jefferson County and 2 new deaths. He says that 29 more people have recovered from the virus.

Governor Andy Beshear has confirmed 244 new cases of COVID-19, bringing the total to 7,688. Two more deaths were confirmed. 334 people have died in Kentucky from the virus.

Beshear didn't hold a daily briefing on Saturday but said there have now been 129,405 people tested for the virus.

Louisville Mayor Greg Fischer has confirmed 58 new cases of COVID-19. This brings the overall total confirmed cases in Jefferson County to 1,922. The mayor also confirmed the death of a 78-year-old male. So far, 127 people have died from the virus.

The health department, which serves Shelby, Henry, Spencer and Trimble Counties, has a total of 109 confirmed cases. Only three people have died while 73 have recovered.

The governor announced the following will be able to reopen on June 1 if the proper precautions are taken:

So far, 127,689 people have been tested. The governor encouraged everyone to get tested regardless of the presence of symptoms.

Louisville has confirmed 42 new cases of COVID-19 and no new deaths. The total number of cases in the city is 1,864, and 31 people have recovered.

On May 22, Kentucky's travel ban will expire. Governor Beshear urged Kentuckians to be careful about where they travel. He said, for example, trips to the beach are still not safe.

Gatherings of 10 people may resume on May 22. The date to resume gatherings was bumped up by three days from May 25. Beshear said he realizes people will want to get together for Memorial Day and asks that they do so responsibly. Gatherings should be held outside when possible. Frequent hand washing should continue and people should not touch their faces. Plates, utensils, etc. should not be shared, and if you will be within six feet of anyone outside of your household, you should wear a mask.

Kentucky has confirmed 199 new cases of COVID-19, bringing the state's total to 7,225. So far, 121,246 Kentuckians have been tested, and 2,712 people have recovered. Two more deaths were reported. Both were individuals believed to be part of a long-term care facility in Grayson Co.

Kentucky confirmed 227 new cases of COVID-19. There are now 7,080 total cases in the state, and 2,649 people have recovered from the virus. So far, 117,395 people have been tested. Five more deaths were reported in Kentucky.

The 10-year-old Kentucky boy who was on a ventilator is improving an has been taken off the ventilator.

Fischer said two of those cases are from employees at Metro Corrections. In total, 45 Louisville first responders have tested positive. At this time, 24 have returned to work.

The mayor also announced 1,089 total people have recovered in Louisville, 24 of those recoveries coming in the past 24 hours.

Governor Andy Beshear confirmed a second minor, a 16-year-old, is in the hospital suffering from a COVID-19 related illness. The first, a 10-year-old boy, is on a ventilator, but is now showing signs of recovery.

According to Dr. Stack, the syndrome which is being described as "pediatric multi-system inflammatory syndrome," was first seen in New York.

Louisville Metro Corrections confirms two inmates have tested positive for coronavirus. These are the first two positive cases in inmates reported at the jail. Another employee has also tested positive, bringing the total number of employees with the virus to 24.

Officials say numbers at Green River Correctional Complex have stabilized for the time being. They say 1,081 staff and inmates have been tested at the facility.

50 staff, 350 inmates are positive with the virus with two staff and two inmates currently hospitalized.

The state released more numbers of how COVID-19 is affecting long-term health facilities.

Twenty-seven residents and 5 staff have tested positive for the virus. Five deaths were also confirmed -- all residents.

So far, 889 residents, 365 staff confirmed positive for the virus. Officials say overall, 181 deaths have been associated with these facilities.

State now has 50 or more testing locations for COVID-19; "The challenge now is getting you to take the test," Beshear said. "Remember when we used to say our goal was for everybody who wants a test to be able to get a test? That day is here. Please sign up. Let's make sure we use every test in every region."

This brings the statewide totals for Kentucky to 6,677 confirmed COVID-19 cases and 311 deaths.

2,335 people have recovered from the virus in Kentucky.

Governor Andy Beshear says a 10-year-old boy has been placed on a ventilator and is critically ill due to COVID-19.

"As the dad of two kids right around that age, my goal is to always be treating this like it's real, to never think that my kids are somehow immune," he said.

Three more first responders have been confirmed to have the virus. Two are corrections employees and one is with LMPD.

Mayor Bill Dieruf of Jeffersontown will issue an executive order which will help restaurants serve more customers safely. On May 22, restaurants across the state will be allowed to reopen at 33% indoor capacity and 100% outdoor capacity. Mayor Dieruf will allow restaurants in Jeffersontown to use a portion of their parking areas and outdoor spaces to seat customers further apart. He is expected to sign the executive order on May 15.

Starting May 11, Kentucky Governor Andy Beshear is encouraging everyone to wear a mask when in public. Beshear said wearing masks will help reduce the spread of the virus when Kentuckians increase contact as businesses reopen. The first phase of reopening will take place gradually in four one-week increments on May 11, May 18, May 25 and June 1.

RELATED: Watch this little boy overflowing with joy as he reunites with grandparents through glass door