Kentucky has almost 30 cases of COVID-19, according to Beshear. He's asking more businesses to close by 5pm Wednesday, March 18. 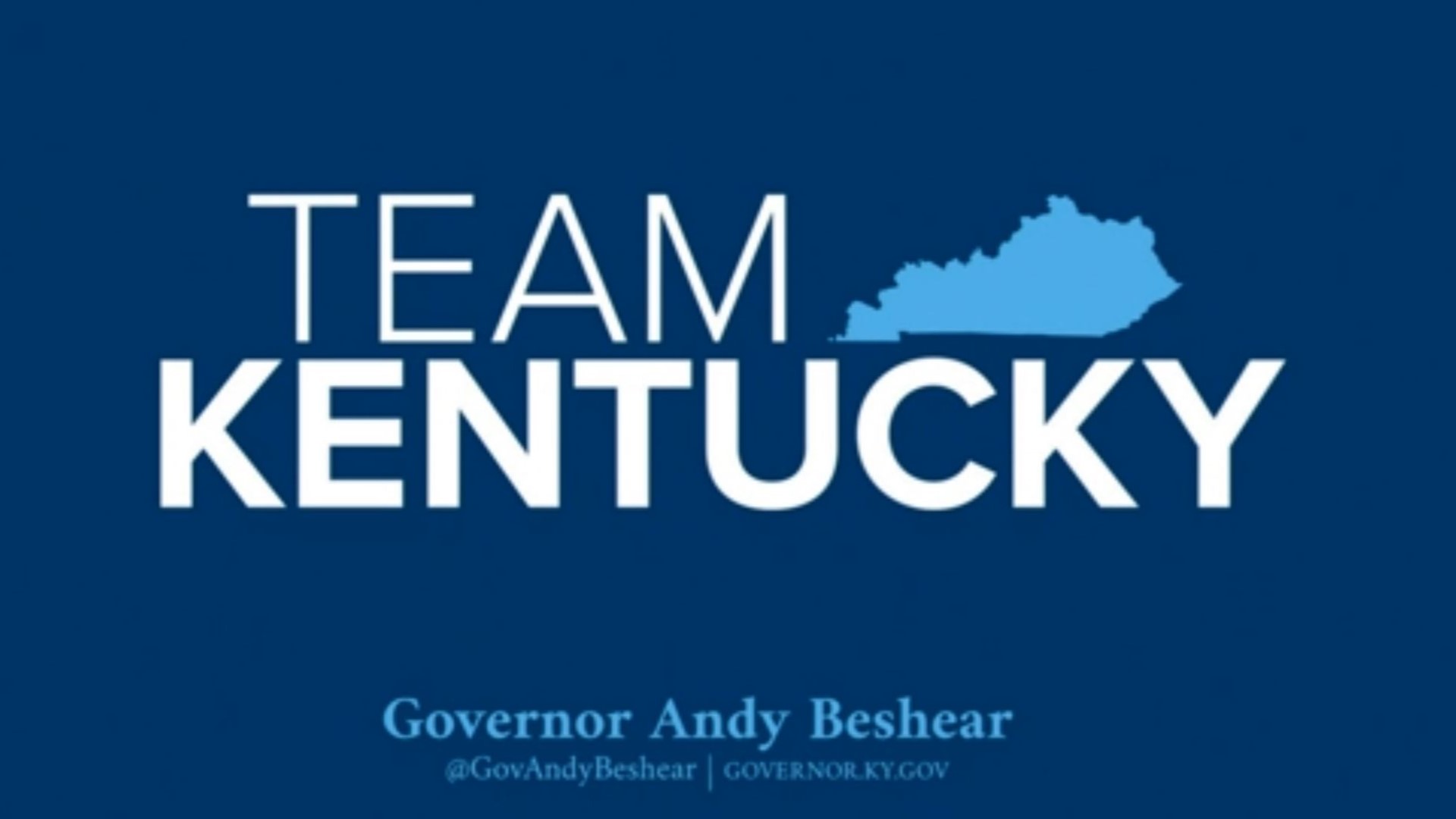 Kentucky now has 27 cases of COVID-19, according to Beshear. Nine of those cases are in Metro Louisville. He's asking more businesses to close by 5pm Wednesday, March 18.

In an effort to minimize social interaction in Kentucky’s busy courthouses and judicial centers during the COVID-19 outbreak, the Supreme Court of Kentucky has placed restrictions on dockets, jury trials and jury service from March 16-April 10.

DMV offices to close statewide. In keeping with Governor Andy Beshear’s order to cancel in-person government services, driver’s licensing offices statewide will close as of Tuesday evening. A 3-month extension is being granted for renewing licenses.

Gov. Beshear is asking people to have small private funerals and when things are better have a memorial service with larger crowd.

Weddings: Gov. Beshear says no large weddings because that will spread the coronavirus. He suggests having a small wedding with just family and few friends or postpone the wedding altogether.

We are working hard to continue to support our students during this challenging time. Watch below to hear detail JCPS' plans for emergency feeding sites and instructional support.

List | Where senior citizens, students can get meals for the next two weeks

Louisville Mayor Greg Fischer announced a series of changes to city operations and facilities to protect public health, as well as the safety of Louisville Metro Government employees, in response to the ongoing COVID-19 outbreak.

MetroSafe is screening all calls for COVID-19 to give first responders as much information as possible about whether a person may have or be at risk for having the virus.

Also, effective immediately, all first responders with the Louisville Metro Police Department, Louisville Fire Department, Metro Emergency Services and Metro Corrections will be screened for symptoms of COVID-19 upon reporting to work.

The Kentucky Derby Festival announced that Thunder Over Louisville and all other festival events will be moved to August 15. Organizers for KDF said those who have already purchased Pegasus Pins can hold onto them and use them when the events happen later this year.

Churchill Downs also announced the postponement of the 146th Kentucky Oaks and Derby. The Oaks will take place on September 4 and the Derby will happen on September 5.

The 146th runnings of the Kentucky Oaks and Derby will be moved to Labor Day weekend due to the coronavirus pandemic. This will be the third time the Derby has been run outside of the month of May. The other dates were April 29, 1901 and June 5, 1945.

After initially announcing the closure of indoor exhibits and event spaces, the Louisville Zoo is closing its entire facility to visitors, including the Asian Lantern Festival that was slated to run through April 25. The Zoo staff will continue to care for the animals and maintain the facility.

Following a recommendation from Gov. Beshear, Metro Corrections has suspended inmate visitation for at least three weeks. Jail facilities had initially continued to allow inmates to receive visitors via video.

Louisville Gas & Electric Co. on Monday said that it will stop disconnecting customers with unpaid bills until May 1. The city’s electric utility said is also waiving new late fees incurred during this period.

Governor Andy Beshear says there are now 22 cases of coronavirus statewide. He confirms the latest patient is a 34-year-old woman in Jefferson County.

Beshear: "We need to do whatever possible to keep everyone safe."

Kentucky's primary is postponed until June.

Childcare centers to close temporarily after Friday
Gov. Beshear asks child care centers to close out of an abundance of caution to prevent the spread of COVID-19. The policy will be forthcoming but will include an exception for health care workers, and there will be some on-site employer exceptions.

First weekday of students being out, JCPS served over 5,500 meals which includes breakfast and lunch to students out of school.

Preparing for the possibility that schools may be out past scheduled return date on April 3.

Work team trying to figure out how to get Chromebooks, other necessary devices to JCPS students if social distancing days increase.

Mayor Greg Fischer says his test is COVID-19 test is negative. "I have just learned that my test for COVID-19 was negative. Per Health Department guidance, I will continue to self-quarantine for 14 days from the date of exposure, which runs through March 21.

There have been 21 confirmed cases of COVID-19 in Kentucky with one death, Governor Andy Beshear said in his Monday morning press conference.

Governor Andy Beshear announced that the first death related to COVID-19 has been reported in Kentucky. The person was a 66-year-old man from Bourbon County. Beshear also said the virus was just one factor that led to the man's death.

Gov. Beshear identified the latest patient in Jefferson County as a 54-year-old male and said that 14 out of the 16 people from Kentucky who were on the Grand Princess cruise ship are now back in the state.

All restaurants and bars will be closed to in-person traffic starting at 5 p.m. on March 16. There will be exceptions for establishments with drive-thru and delivery services. The governor said he would do everything in his power to lessen the financial strain of these closures, especially for small businesses.

Taking steps to waive the waiting period for unemployment will be waived for those who are losing their jobs and will waive work-search requirements while the state of emergency is in effect.

The State Capitol will be closed to all non-essential personnel.

Two state government officials are in self-isolation. Transportation Cabinet Secretary Jim Gray and Kentucky Infrastructure Authority Executive Director Edith Halbleib are taking this step out of an abundance of caution.

Gov. Andy Beshear updated Kentuckians on the state’s ongoing response to limit the spread of the coronavirus (COVID-19) and said the state has three additional positive cases.

Kentucky's number of positive cases is now 21. The new positive cases are in Jefferson County and one in Clark County.  Gov. Beshear said that while the state’s first patient fully recovered from the virus, of the 21 patients is in critical condition and is not expected to recover. Beshear said that while the coronavirus is not the only factor in that individual's condition, it is a contributing factor.

After attending a recent event in Louisville where someone who attended later tested positive, Gov. Beshear tested negative on Saturday and is not showing any symptoms.

Gov. Beshear said 14 of the 16 Kentuckians who were on the Grand Princess cruise ship are on their way back to the state. He said two other Kentuckians, who were at a different Air Force base, will return Monday.

“These are our people. I don’t think they have been treated the way they should.” Gov. Beshear said.

Gov. Beshear urged people not to unnecessarily buy large amounts of food and household items, making it unavailable for others.

Gov. Beshear said one person, who tested positive at UofL, left against medical advice and returned to his home in Nelson County. The Lincoln Trail District Health Department asked him to self-quarantine, but he refused. The Cabinet for Health and Family Services is currently working with the local county attorney and county judge-executive to obtain an order to force him to quarantine in his home.

LOUISVILLE | During the call via teleconference, Mayor Greg Fischer confirmed he is in self-isolation after being exposed to someone who tested positive for the virus. Fischer gave the following statement:

“Although I have no symptoms, I was tested for the virus in consultation with the Metro Department of Health and Wellness. I do not yet have the results of that test. In the meantime, I have self-isolated, just as we’d ask anyone to do. Should the test come back positive, I’ll be working from home for the quarantine period, which begins with date of exposure, so that’s March 7.”

The Mayor will be in isolation until early in the week after receiving guidance from Metro Health and Wellness that he be isolated 14 days from the date of exposure. He added that future media briefings on the city’s response to the pandemic will be conducted virtually in order to limit person-to-person contact.

RELATED: Mayor Fischer, other city leaders on self-quarantine after coming in contact with positive coronavirus case

The Mayor also reminded the public of the steps taken so far in order to contain the spread and protect the public.

Those measures include temporary closure of:

RELATED: List | Major events that are canceled or postponed in Louisville due to COVID-19

Here's what is open in Louisville:

Five community centers will be open solely for the purpose of meal distribution. Seniors can get five meals at a time and return the following week for another five meals.