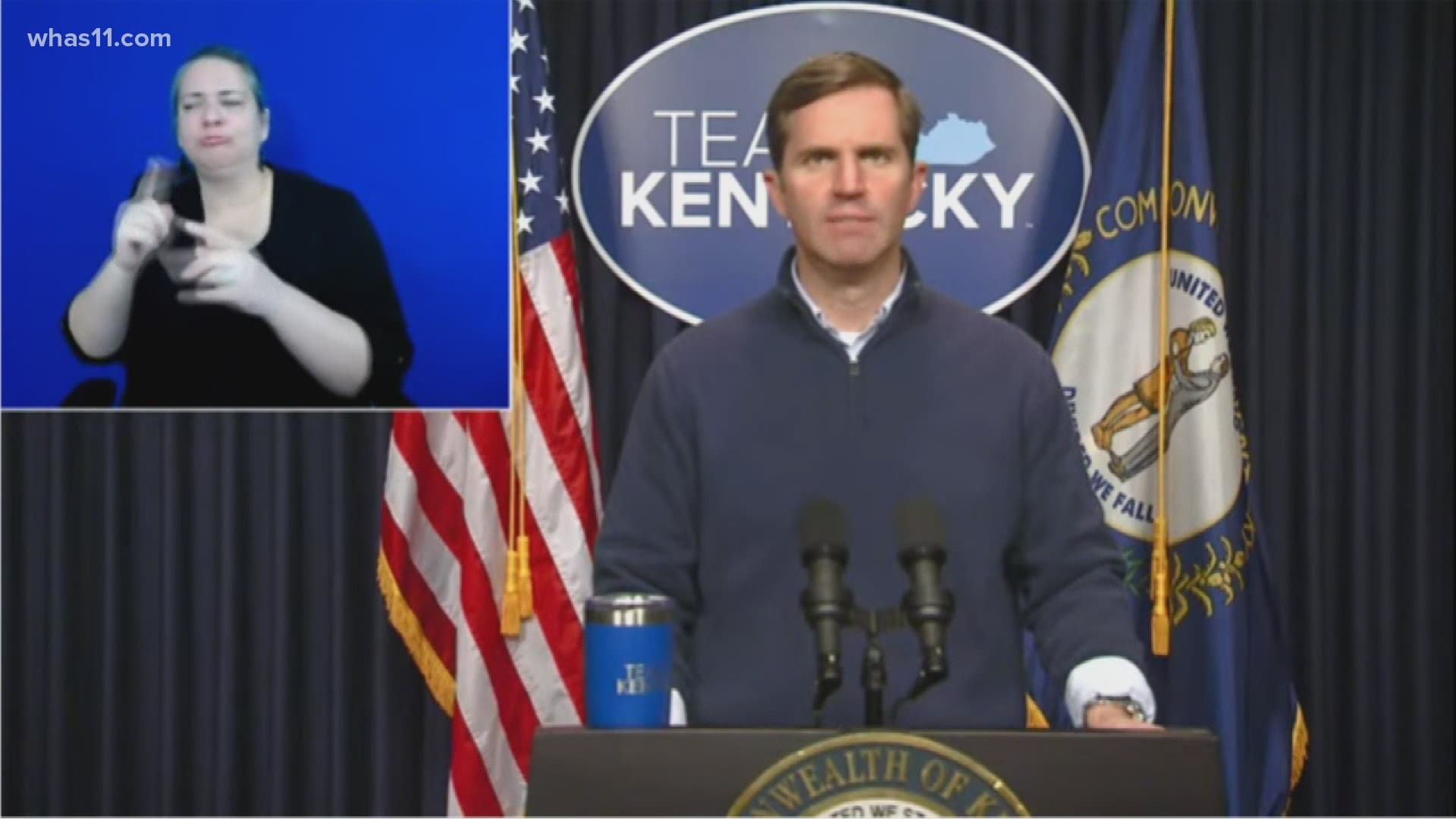 It is the sixth consecutive week of declining cases with 979 reported on Sunday.

Some of the data reported with the new cases include 145 cases found in those 18 years old and younger.

The deaths associated with the virus continues to remain high with 21 reported. Kentucky has lost 4,447 people overall.

There are currently 902 people hospitalized, 248 in intensive care and 148 on a ventilator.

Gov. Andy Beshear is reporting another 1,333 positive cases of COVID-19 and 25 new deaths.

Beshear said the state's positivity rate is currently at 6.77%

Jefferson County reported another 205 cases, bringing the county total to 71,623.

Other numbers across the Commonwealth:

Overall, Kentucky has reported 396,018 cases and 4,426 deaths associated with the virus.

Kentucky health officials announce 1,993 new cases of COVID-19 and 28 new deaths. The state's positivity rate is 6.89%, according to a new release from Governor Beshear's office.

“Overall, our COVID-19 numbers are coming down, which is great news – but we can’t let our guard down when we’re this close to finishing the fight,” Beshear said in the release.

While the numbers are lower, the state's positivity rate is higher. Beshear said the increase in positivity is due to weather. The people receiving tests this week are believed to be the sickest, while asymptomatic people likely did not get a test.

More than 555,000 Kentuckians have received their first dose of the COVID-19 vaccine, as Beshear said the state has been through every opportunity to give the first dose to long-term care facilities.

Weather has caused a delay in some vaccine shipments, but Beshear said they have the infrastructure to give out more doses than they have been once additional shipments are received.

Additionally, Coleman encouraged Kentuckians to take advantage of the special three-month healthcare enrollment period that started this week. Residents are also encouraged to take the state's internet speed test to highlight areas most in need of broadband.

Kentucky reporting 1,017 new positive cases of the virus and 18 additional
The state's positivity rate is at 6.99%.

In his news release, Gov. Andy Beshear said Kentucky continues to hold its progress against COVID-19, but it is too early to relax precautions.

“We have made incredible strides against this evil virus, but we can’t let up yet,” Beshear said.

Beshear shared some good news when it comes to counties in the red. He says there are now just 63 out of 120 in the red zone.

Twenty-seven deaths were reported Tuesday including a 71-year-old woman from Jefferson County.

Gov. Andy Beshear said the state will receive a 29% increase in supply beginning next week about 87,860 more vaccines for the Commonwealth.

Louisville numbers by the week (Feb. 16), according to Metro Public Health and Wellness

39 COVID-19 patients on ventilators as of February 16, compared to 49 last week.

Officials say virus cases remain in every zip code; about 142,812 vaccines have been given since December; about 12.2% of Louisville residents have received at least the first dose of the vaccine while 4.6% have received both.

Louisville remains in the red zone with several cases, deaths and incident rate. COVID-19 is the number one health threat in the city.

Health officials are reminding residents that if they are out in public – like going grocery shopping or in the workplace, they still should get tested. Moyer said testing helps identify new cases and tracks the spread in the city.

“We want to make sure that you're able to quarantine, keep your family and community members safe and that you have the proper treatment to prevent serious illness or hospitalizations from COVID," Dr. Moyer said.

They say about 41 members of Louisville Metro Police, Louisville Fire, Metro EMS, Metro Corrections and the Sheriff’s Office are off duty due to COVID-19.

“COVID-19 School-Related Student Travel Considerations” includes several factors to be taken into consideration when planning any school-related student travel, except for Kentucky High School Athletic Association (KHSAA) contests. Districts were cautioned that travel cancellations remain a very real possibility in the coming months due to the ongoing COVID-19 pandemic, and there may be financial penalties may be associated with cancellations.

For student athletic contest-related travel, districts should refer to the travel guidance provided by the KHSAA.

The “Guidance on Safety Expectations and Best Practices for Kentucky Schools (K-12): Interim Guidance as of December 7, 2020” includes the expectation that schools must “[c]ancel field trips, assemblies, and other large group activities to avoid mixing students in large common areas. Adhere to the Governor’s current guidance regarding group gatherings.” This expectation is in addition to revised travel guidance from the Kentucky Department for Public Health (DPH) that discourages all out-of-state leisure travel until further notice.

Gov. Andy Beshear shared good news when it comes to the state's fight against COVID-19.

The governor has reported 723 new cases -- the lowest number of cases not seen since Oct. 12.

Jefferson County also reported 144 new cases included in those totals. The overall countywide total is at 70,376.

The state also reported a positivity rate of 6.57%

Kentucky has reported 389,521 positive cases and 4,291 deaths since tracking the virus began nearly a year ago.

Kentucky is now at 12% of its population that have been vaccinated.

So far, about 200,000 Kentuckians 70-years-old and up have received the vaccine.

Childcare workers are now moving up the list to get the virus. The governor said they will now be placed in 1B and can start signing up for the vaccine anywhere around the Commonwealth.