Police tracked 37-year-old Kendra Burnett to the Central Station Kroger by an ankle monitor. She was ordered to wear it after testing positive for COVID-19. 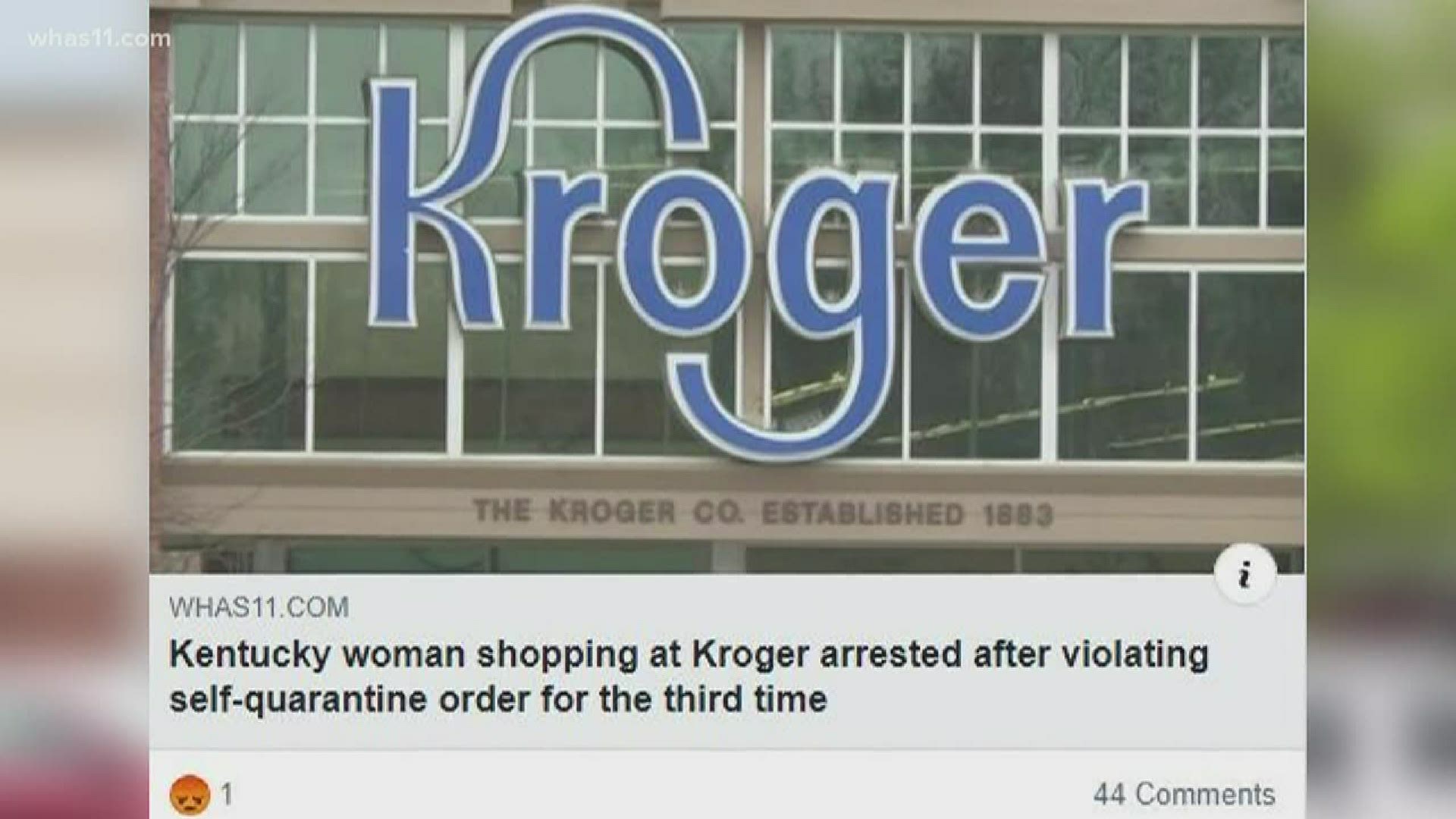 LOUISVILLE, Ky. — A Kroger store has been deep-cleaned after a woman broke her mandated quarantine and was arrested.

Police tracked 37-year-old Kendra Burnett to the Central Station Kroger Tuesday by an ankle monitor. She was ordered to wear the ankle bracelet after health officials said they could not get in touch with her.

While officials thought the monitor was enough to keep her at home, in a controversial Facebook post, a paramedic said the arrest was over-reaching.

Robbie Smither is a board member of the Kentucky Board of Emergency Medical Services. According to his Facebook, he is also a paramedic.

He shared WHAS11 News story on the arrest of Burnett Tuesday saying, 'This is tyranny. I wish this lady would have used deadly force against these tyrants and then a jury nullify the case.' The post was taken down as of Wednesday.

In a statement sent to WHAS11, the Board of Emergency Medical Services said: "Although we believe in the protection of freedom of speech, we do not condone speech or actions that promote violence or discrimination."  When WHAS11 called him on the phone, Smither said that was never his intent. "I believe people have the right to their own personal liberties, this is not a matter of anti-law enforcement," he said. "This is me as a citizen speaking in a public forum." He said he believes there is no due-process in Burnett's case.

The former Treyton Oak Towers employee shared a public Facebook post on April 11 of an image showing an ankle-bracelet. It happened after Health Officials said they could not get in touch with her after she tested positive for COVID-19 and put her under mandated quarantine.

Police tracked her to the Kroger on Second Street Tuesday where she came in contact with five people. She was arrested outside the store and charged with three counts including wanton endangerment.

The Jefferson County Attorney told WHAS11 this is still an open investigation, but he seeks appropriate action when someone may be a danger to the community, especially during the time of emergency.

In an email sent to WHAS11, Kroger's spokesperson Erin Grant said: "We are still investigating the incident. The safety of our customers and associates is always our top priority. This incident is unfortunate, and Kroger always encourages those feeling ill to stay Healthy at Home. In addition to our already expanded cleaning initiatives, the store team has deep cleaned all areas like frozen and dairy door handles, service counters, all check lanes, and bathrooms that the customer may have come in contact with immediately after she left the store. We currently have a standard practice of doing this type of cleaning multiple times per day in every store."

After our review of the footage, the customer did not come into contact with any customers and had two brief transactions with an associate inside the store and one brief transaction in our wine and spirits shop. We have plexiglass dividers at all areas of point of sale as an additional safety measure. She wore a mask and gloves while in the store, and did not touch any product that she did not purchase. The arrest did not take place in our store, but rather in the parking lot as she was going to her car. You can also continue to use my previous quote about cleaning and extra steps taken.