The state has confirmed 11,774 total cases of COVID-19 this week, including 1,423 cases and four deaths reported Sunday. 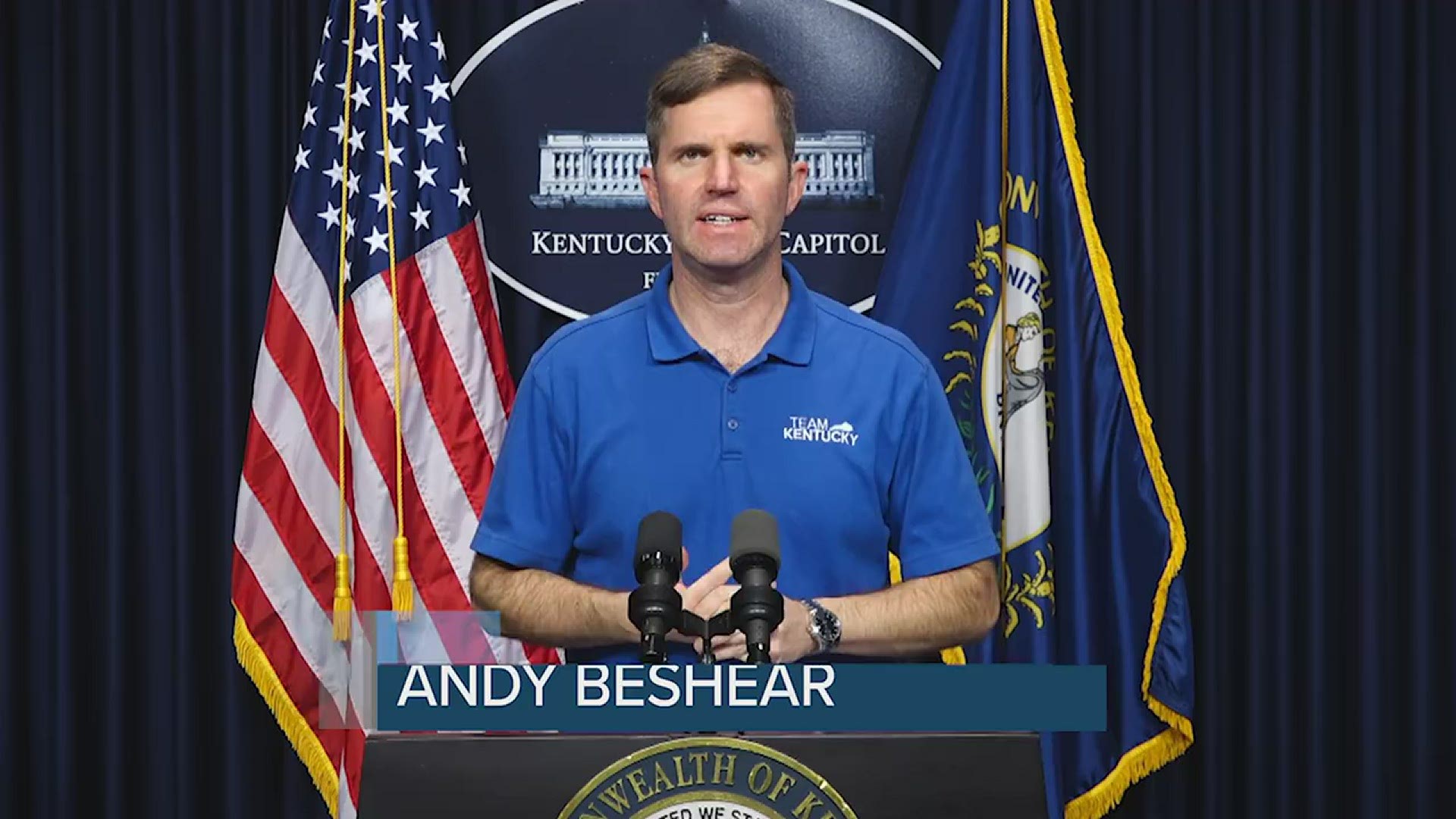 LOUISVILLE, Ky. — This is a weekly blog with daily updates on COVID-19 numbers and other related content in Kentucky for the week of October 26, 2020. Governor Andy Beshear is scheduled to give live updates Monday through Thursday at 4 p.m

“If you’re not alarmed by these record numbers of COVID-19 cases, you should be.”

Gov. Andy Beshear announced Kentucky has set a record for new weekly cases of the virus than any other since tracking the pandemic began in mid-March.

The commonwealth has started off the month of November with 1,423 new cases of the virus. That brings the weekly total of COVID-19 cases to 11,774.

“I know we’re tired, but if we do not get the spread of this disease under control, we risk a darker, more deadly period this winter than we ever experienced in the spring,” Beshear warned.

Jefferson County is one of many red zone counties and among 5 counties with the most positive cases reported Sunday with 300.

Gov. Andy Beshear continues to urge counties in the “red zone” to follow the state’s 9 recommendations to help slow the spread of COVID-19 and avoid being in the red zone.

Department for Public Health commissioner Dr. Steven Stack said indicators are telling them what they hoped to avoid – "Kentucky is in a critical situation." He said the spread of the virus is accelerating at a dangerous pace.

There is also limited reporting on Sunday so much more information is expected to be released on Monday.

Cases of COVID-19 continue to climb in the Commonwealth as Gov. Andy Beshear reported the second highest numbers the state has seen since the pandemic began.

The governor reported 1,986 new cases Saturday and this also marks the highest ever number on this day and it’s on track to be the single largest week of cases.

Nine new deaths were reported, bringing the overall total of Kentuckians lost to the virus to 1,485. Among those lost include a 76-year-old Jefferson County man.

The state has confirmed a total of 107,219 of positive cases since March.

Governor Andy Beshear reported 1,941 new cases of COVID-19. According to the state's daily COVID-19 report, there have been 105,242 cases overall.

The state's test positivity rate is 6.19%

“With nearly 70 counties now in the red zone, I am pleading with you to observe both Halloween and Red Zone Reduction Recommendations. Lives and livelihoods literally depend on all of us doing our part," Dr. Stack said in a release.

RELATED: Here are the recommendations for a safe Halloween in Kentucky amid the pandemic

The governor announced 1,821 new cases reported for Thursday with a total of 101,494 Kentuckians infected.

The top counties with the most positive cases today are Jefferson, Fayette, Hardin, Kenton, and Warren.

A total of 331 cases were reported in Jefferson County. The positivity rate is 6.04%.

Nineteen more people have been lost to the virus, bringing the death toll to 1,462.

Gov. Andy Beshear urged every Kentuckian in 68 red zone counties to up their game in the fight against COVID-19 and follow nine recommendations beginning Monday, Nov. 2, through Sunday, Nov. 8, to reduce the spread of COVID-19 as cases flare in those areas.

The Governor said that new White House guidance suggests “current transmissions are linked to home gatherings,” where Americans are not as likely to wear masks around people from outside of their household. With broad community spread and transmission in the state, the Governor said it is crucial that communities work together to follow these new recommendations on top of existing requirements.

The top counties with the most positive cases today are Jefferson, Fayette, Hardin, Nelson, Pike, Kenton, and Warren.

Fourteen more people have been lost to the virus, bringing the death toll to 1,428.

The Governor announced a new testing project today with the U.S. Department of Health and Human Services (HHS) as the state sees record-high numbers of new COVID-19 cases. Up to 200 tests tomorrow and 300 tests each day after are available to Kentuckians at the Kentucky Exposition Center – Lot C in Louisville, from Oct. 29-31 and Nov. 2-6.

An additional testing location in Lexington will be announced soon and will open Nov. 16. Kentuckians can expect PCR test results within two or three days. Each patient receiving a test gets a pack of five cloth face coverings provided by HHS. Kentuckians can register for a test now here.

The top counties with the most positive cases today are Jefferson, Fayette, Warren, Kenton, Hardin, and Pike.

Eighteen more people have been lost to the virus, bringing the death toll to 1,410.

List of red reduction recommendations for counties that are labeled 'red zone' counties :

Gov. Andy Beshear has announced 953 new cases of COVID-19 in Kentucky. This is the highest total number of cases reported on a Monday due to the limited reporting from the weekend.

Jefferson County had 331 of the new cases.

The governor said the third escalation of the coronavirus is faster than the previous two with more people hospitalized and stays in the intensive care unit.

Three more people have been lost to the virus, bringing the death toll to 1,410.

Kentucky currently stands at 97,866 confirmed cases of COVID-19 since tracking began in March.

The state is recommending a 14-day self quarantine for travelers who went to any of those states reporting positive testing rates equal or greater than 15% for COVID-19 testing.

Governor Beshear and his family announced they are out of quarantine now.

They were quarantined after one of their driver's tested positive for COVID-19 two weekends ago.

None of the family tested positive for the virus but wanted to take precautions for those around them.

Governor Beshear says they have tested negative multiple times and says wearing masks at the time of contact helped.

Highlights from the week of October 19: