Kentucky has confirmed 66,491 cases of coronavirus since March. 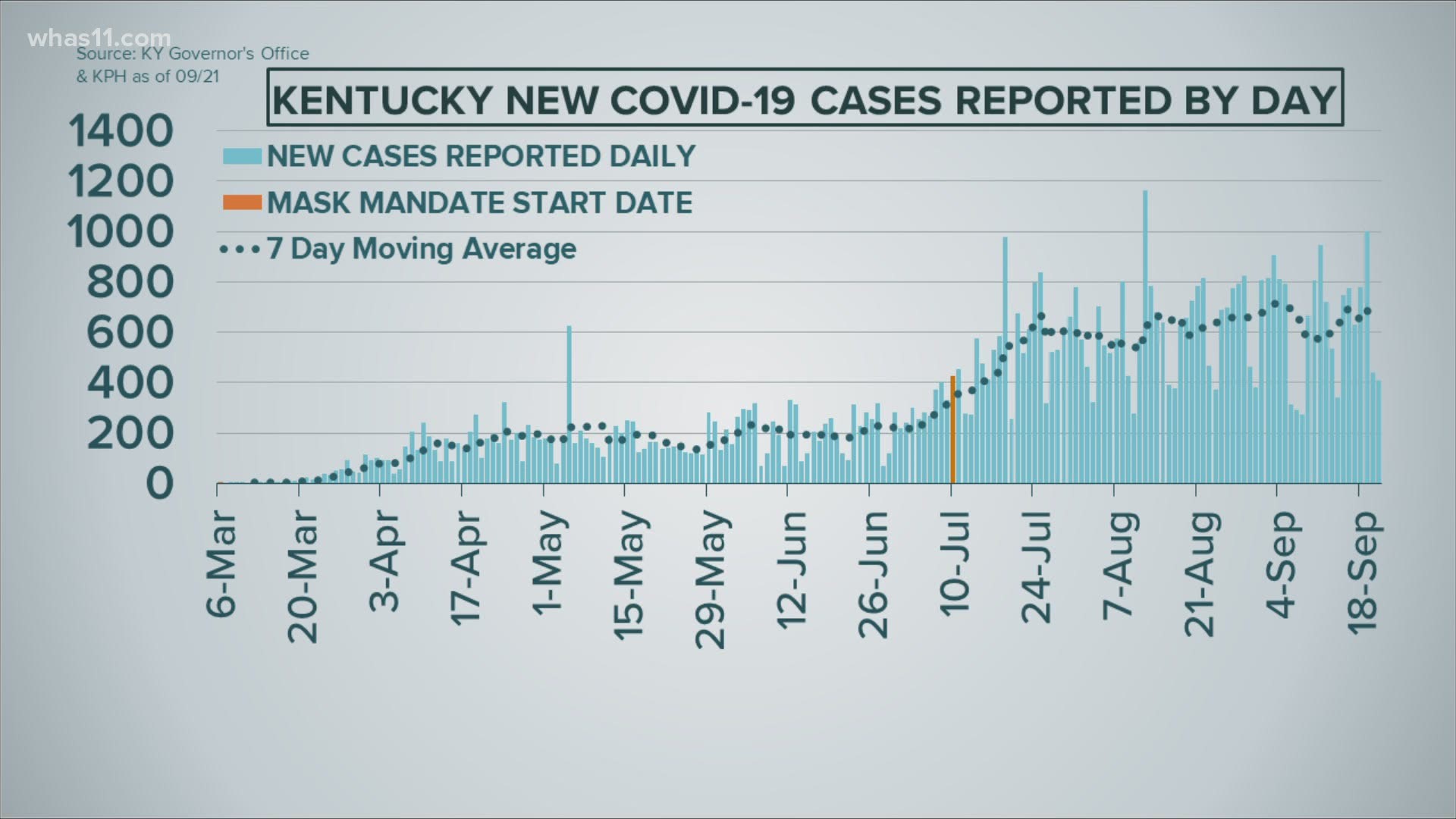 LOUISVILLE, Ky. — This is a weekly blog with real-time updates on COVID-19 numbers and other related content in Kentucky for the week of September 21, 2020. Governor Andy Beshear is scheduled to give updates Monday through Thursday at 4 p.m.

Kentucky has seen another 456 cases of coronavirus, according to Gov. Andy Beshear’s office.

In a report released Sunday, officials said 60 of the new cases were found in those 18-years-old and under. The youngest case was another 2-month-old for the second day in a row.

Due to limited reporting during the weekend, only three deaths were reported which included a 97-year-old woman from Bell County. With these deaths, the states death total stands at 1,157.

Kentucky has confirmed 66,491 cases of coronavirus since March.

Numbers including the current number of people tested and positivity rate will not be available until Monday.

Gov. Andy Beshear said Kentucky is on track to have the single highest week in terms of positive coronavirus cases.

The governor reported 973 new cases on Saturday, bringing the current statewide total to 66,036 since tracking the virus began in March.

He said 132 cases were found in those 18 and younger with the youngest case being a 2-month-old.

Beshear is urging people to wear masks or face coverings. He said he’s seeing “less of these out there than more.”

“We’ve already lost more than 200,000 Americans. Do your part as Team Kentucky, do your patriotic duty – mask up, Kentucky. It may save the life of someone you know,” he said.

Five more people have been lost to the virus, adding to the current total of 1,154 overall.

The governor said the state’s current positivity rate stands at 4.42%.

The youngest was only 2 months old.

Gov. Beshear reported 12 new deaths which bring the total to 1,149 Kentuckians lost to the virus.

“We cannot continue to have days where we have 900-plus cases,” said Gov. Beshear. “Please put on your mask. Please engage in social distancing. The lives and the health of the Kentuckians around us depend on it.”

Kentucky Gov. Andy Beshear is reporting 745 new COVID-19 cases. Of the new cases reported 107 of them are children 18 and under, 20 of which were children ages 5 and under. The youngest was just 6 days old.

“The toughest part of today’s report – 13 new deaths. These are 13 individuals whose families will be mourning them. It’s a hard number for any given day; 13 individuals. And not on here is a friend of mine from Northern Kentucky who I just learned about an hour and a half ago had passed away after a multimonth battle with COVID-19,” said Gov. Beshear. “Let’s remember this virus is very, very real and it’s still out there. So let’s make sure that we light our homes up green, we ring those bells at 10 a.m. and that we try to reach out to these families who may be needing help.”

As of Thursday, there have been at least 1,301,407 coronavirus tests performed in Kentucky. The positivity rate was 4.57%, and at least 11,570 Kentuckians have recovered from the virus.

The rolling figure reflects the average number of tests coming back positive for COVID-19.

Beshear reported five deaths from the coronavirus Wednesday, bringing the state’s total to 1,124.

The state had 796 new cases for a total of 63,517 since the pandemic began. Beshear says almost 1.3 million tests have been administered in the state.

Governor Andy Beshear announced 824 new COVID-19 cases with a total of 162,731 cases in Kentucky.  The positivity rate is now over 4%.

One hundred and thirty-four of the newly reported cases were from children ages 18 and younger, 22 of which were children ages 5 and under. The youngest was 6 days old.

Seven new deaths were reported bringing the total of deaths in Kentucky to 1,119.

There are currently 511 COVID-19 patients hospitalized and 133 in ICU.

‘The Fast 4 at 4’
Gov. Beshear on Tuesday highlighted a variety of issues of importance to Kentuckians and the commonwealth.

Kentucky confirmed 406 new cases of COVID-19, bringing the state's total to 61,917. One additional death was also reported, bringing the total number of Kentuckians who have died from the virus to 1,112.

More than 1,000,000 tests have been administered in Kentucky and the state's test positivity rate is 3.77%.

There are currently 496 COVID-19 patients hospitalized and 114 in ICU.

The also governor encouraged Kentuckians to get a flu shot.