The positivity rate is 5.02%, the lowest in four months, Governor Andy Beshear says. 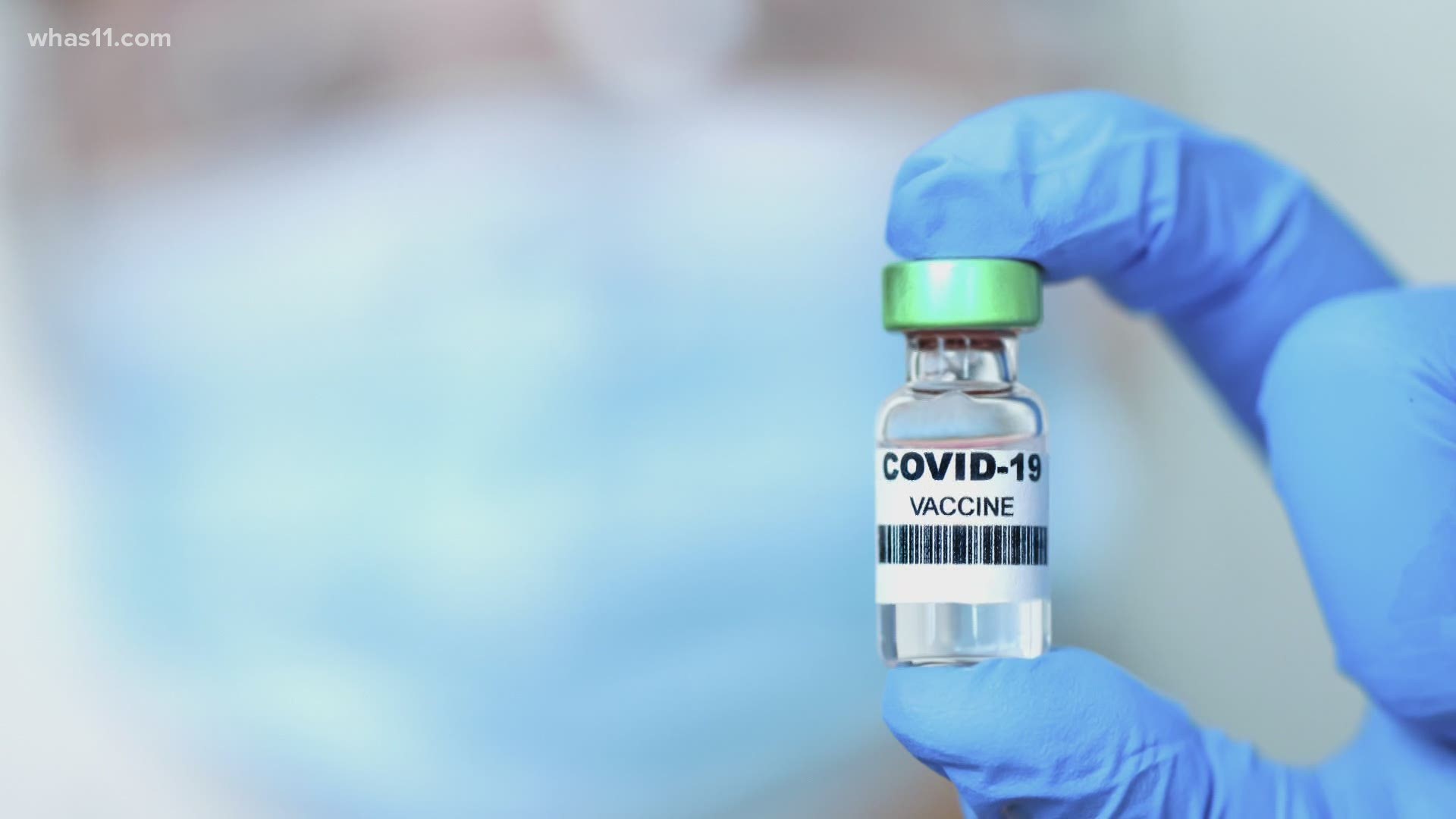 "This is good news and the direction we want to go in," Beshear said Sunday in a recorded message posted on Facebook.

Jefferson County reported another 180 cases bring the countywide total to 72,989.

The positivity rate is 5.02%, the lowest in four months, Beshear says.

Nearly 4.5 million tests have been given in Kentucky.

The state has reported 404,622 positive cases and 4,637 deaths since the pandemic began last year.

The United States now has a third weapon against COVID-19. The Johnson and Johnson vaccine has been given the emergency use authorization from the FDA.

Gov. Beshear said on CBS' Face The Nation Sunday that having the one shot vaccine would change the game.

"Johnson and Johnson is going to be a game changer. The fact that we can fully vaccinate everyone in just one shot that basically eliminates death and serious illness -- and that was going to get tens of thousands in additional vaccines, per week -- per state. It's just going to get us to the finish line," he said.

The governor said the state's test positivity rate has declined to 5.52%.

There are currently 818 COVID-19 patients hospitalized, 218 in ICU and 105 on ventilators.

“I hope all of our Kentucky families have a great, safe weekend,” said Gov. Beshear. “We’re still not out of the woods with this horrible virus, but every week, we’re taking another step forward in our fight against it.”

Baptist Health announced a new drive-thru vaccination site will open in Louisville on Friday in parking lot 3 at Breckenridge Lane and Kresge Way. Vaccinations will be given by appointment only and according to the state rollout plan.

The new clinic will be open 8 a.m. -6 p.m. and replaces Baptist Health's vaccination site at the Education Center.

To make a vaccination appointment with Baptist Health, visit www.scheduleyourvaccine.com.

"We want to see that continue to drop," Beshear said.

The governor highlighted the state's vaccination efforts with numbers like 98.7% of all vaccinations being given and close to 650,000 first doses given to Kentuckians.

“Vaccinations are going incredibly well in Kentucky,” said Gov. Beshear. “We are giving out doses faster than the federal government provides them. More than 646,000 Kentuckians have received at least the first dose of their shot of hope less than a year after our first confirmed COVID-19 case.”

Beshear announced the opening of 119 new vaccination sites coming across the state. This includes six new regional sites, 10 sites at Walmart stores, 10 sites at Kroger stores and 90 at Walgreens.

Of those ten new Kroger sites, one will be in Louisville.

As the state moves into Phase 1C at regional sites beginning March 1, Beshear noted that vaccine allocation is based upon population. Vaccine sites across the state may not immediately go into Phase 1C as more individuals in other tiers may still be in queue for their dose.

In closing, Beshear reflected on the one-year mark of COVID-19 being in the Commonwealth.

"Our lives are dramatically different than March 6 last year... There's a collective grief in this Commonwealth," the governor remarked.

His next briefing will be Monday, March 1 at 4 p.m.

Kentucky's test positivity rate is 5.9%, which is the lowest it has been since Oct. 27.

There are currently 883 COVID-19 patients hospitalized, 228 in ICU and 112 on ventilators.

“We are getting these vaccines out faster than the federal government can provide them, so there’s a lot of hope moving into the future,” Gov. Beshear said in a release. “We are going to defeat this virus this year, but until then, we’ve got to protect each other.”

Kentucky’s positivity rate fell to 6.30%, the lowest the state has seen since November 4.

Beshear says the state is working on their top priority in getting students back in the classroom.

He issued an executive order recommending all school districts, including private schools, offer or expand some form of in-person instructional opportunities beginning March 1 or seven days after school staff and personnel have received their second vaccination.

Here are some of the considerations:

The positivity rate remains steady at 6.60%

Thirteen deaths were reported including 6 people from Jefferson County.

Beshear said testing was down last week due to winter weather and may have played a role in the latest numbers.

Kentucky was supposed to receive 71,000 first doses of the COVID-19 vaccine last week but winter weather derailed those plans. The state only received 6,825 doses. Beshear said the state will receive those missed doses from last week in addition to this week's doses which should be about 150,000 doses.

Graham Thompson is a Louisville grocery store employee which means he's in that 1C category. Throughout the last year, he's been in contact with different people every day.

"On the inside I am jumping for joy. Because it is that light at the end of the tunnel," Thompson said. "We do work in an industry that's been beyond active throughout all of this."

Through that, he's realized how essential his role truly is. Thompson is one of the reasons food is available to the community, which is such a crucial resource that was easy to forget prior to the pandemic.

"Ya know working in an industry that provides it you know a lot of times it kind of goes by the wayside," Thompson said.

Thompson says while the vaccine is certainly a shield of protection, it also allows food to once again be viewed as more than just a resource, but a common denominator for gathering.

"The ability for people to move a little bit more freely amongst each other and even get together with their families again," Thompson said.

As an attorney at law, Shaun A. Wimerbly Sr., can't meet with clients in person. His essential job title also puts him in the 1C category and Wimberly says this vaccine is the start to recovering.

"It has hindered the way we practice it has caused timelines to not be met, more importantly it's hard to get a gauge on your clients when you're not meeting with them," said Wimberly Sr. "It changes everything. It attempts to put not just my office but our community back on track to get things back to normal."

Beshear said regional vaccine centers will begin opening vaccinations to those who are in 1C. Those are individuals 16-years-old and up with a medical condition and essential workers. Beshear said they will leave 1C open hoping to "reach" hard to reach individuals in 1B and 1A.

Kentucky has confirmed 397,526 cases of COVID-19 and 4,460 deaths since tracking the virus began last March.

“It is our hope that this guidance will help streamline the school operation efforts of our districts as they continue to navigate the ongoing pandemic,” Education Commissioner Jason E. Glass said in a release.

On Sunday, Kentucky Governor Andy Beshear reported 979 new cases of COVID-19 in the state, saying it was the sixth week in a row of declining cases. Overall, there have been 396,997 cases reported in Kentucky since the start of the pandemic. 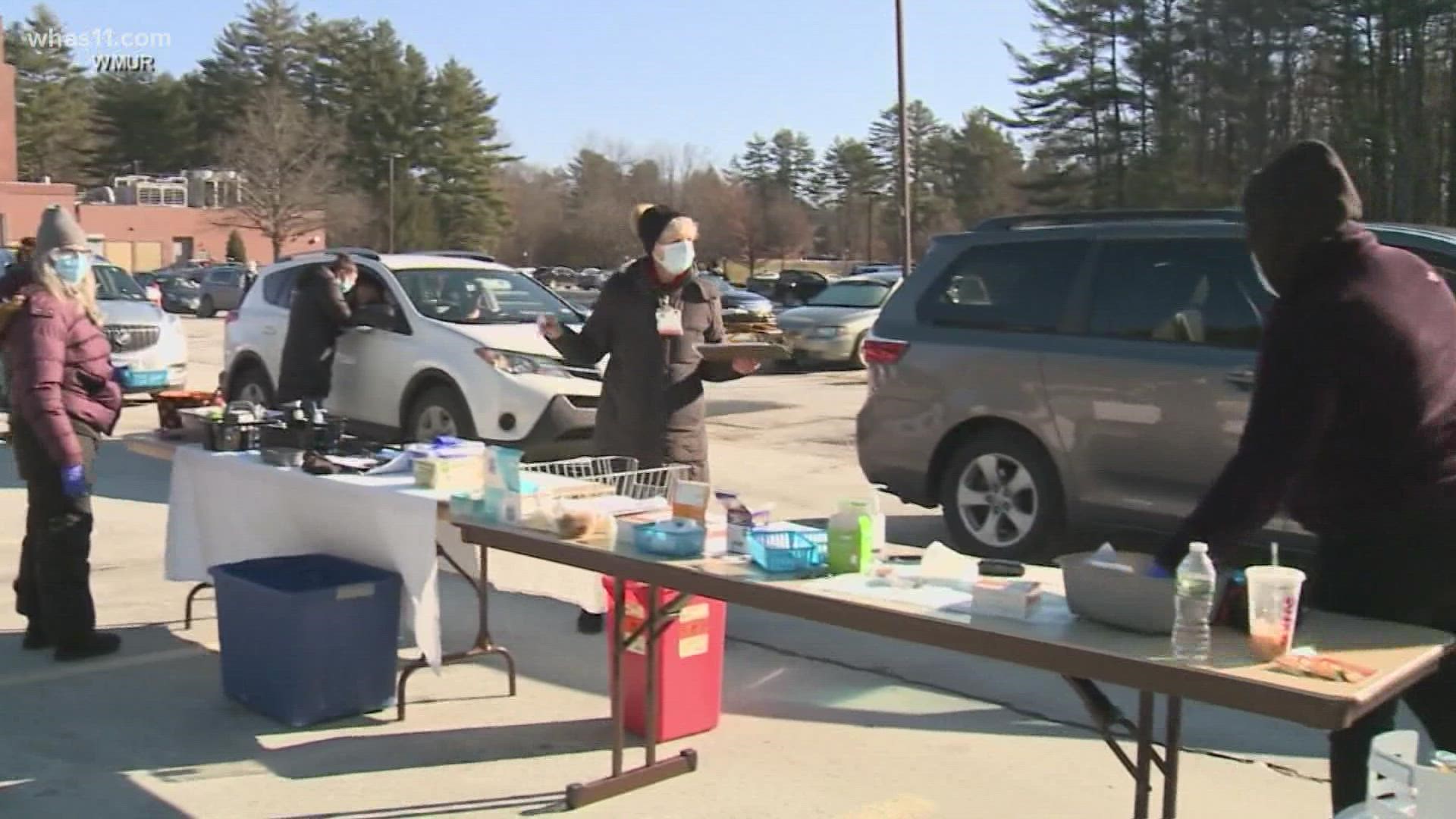