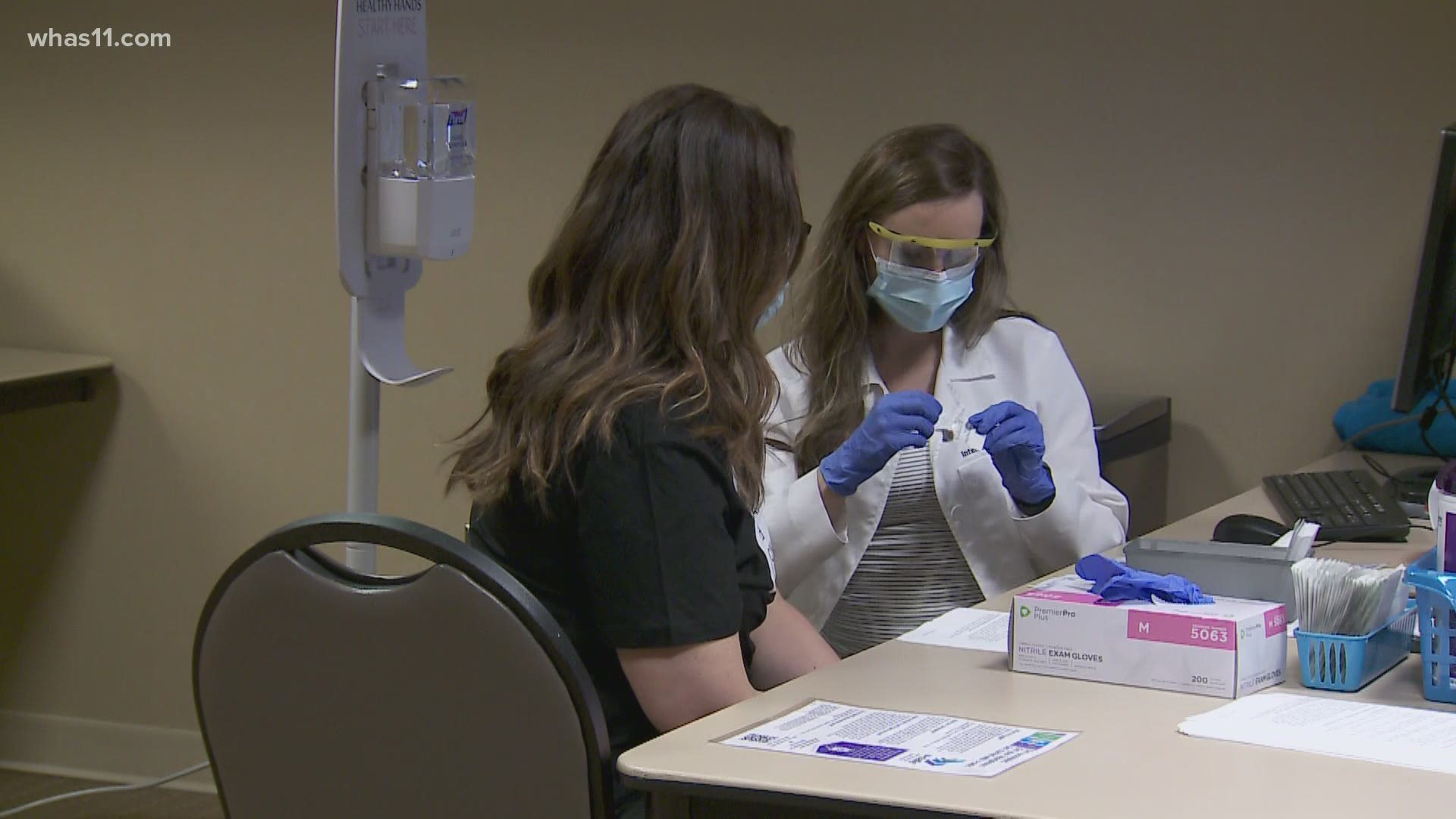 Just hours after a shipment of a second vaccine arrived to aid in the fight against the coronavirus, Gov. Andy Beshear announced another 1,765 positive cases.

Beshear said with the Moderna vaccine, they hope to give it out to hospital workers statewide.

Twenty-six new deaths were reported which included two Jefferson County men ages 73 and 86. A total of 2,397 people have been lost to the virus.

“This is again under what we had this day last week, and this full week, which we end on Sunday, is less than it was the week before. That is a positive sign that shows that the steps we have taken, the sacrifice to mitigate and slow the exponential growth of this virus is working,” Beshear said. “But remember, deaths track cases. And so that exponential growth, we’re seeing the harm from it right now.”

Is the COVID-19 positivity rate finally stabilizing in Kentucky?

Gov. Andy Beshear confirmed mitigation efforts have stopped the growth of the virus as numbers are continuing to decline for a second week in a row. The positivity rate is currently at 8.58%

“What we are seeing is that the measures we have taken are working,” Beshear said. “We have stopped the increase in cases, which we knew we had to do before we can start to decrease those numbers. Let’s all commit to doing what we know is right – wearing masks, social distancing, washing our hands and limiting our holiday gatherings – so we can beat this virus once and for good.”

Twenty-seven more people have fallen victim to the virus including a 79-year-old man and two women, ages 58 and 97 from Jefferson County. Overall, 2,371 people have died from the virus.

There are 1,655 Kentuckians currently hospitalized, 438 in intensive care and 253 on a ventilator.

The state has confirmed 240,564 cases since tracking the virus began.

Top counties with the most positive cases today are: Jefferson, Fayette, Pulaski, Kenton and Warren. Each of these counties reported 100 or more new cases; Jefferson County alone reported 434.

As of Friday, Kentucky has had 237,190 positive coronavirus cases since March, 2.344 Kentuckians have died from virus-related complications.

The Governor reminded Kentuckians that today is the last day to apply for the $40 million Team Kentucky Food and Beverage Relief Fund. Check eligibility and apply here.

The state's test positivity rate has lowered slightly to 8.45%.

The White House report warned Kentuckians against holiday gatherings and urged those over 65 years old or with significant health problems to not enter any indoor location where anyone is unmasked.

The governor also provided an update on vaccine shipments to Kentucky. He gave the following dates when more vaccine doses are expected to arrive:

During the governor's briefing, he said a decision came in from the U.S. Supreme Court to deny "the Kentucky Attorney General’s attempt to overturn the ruling in the 6th circuit that said we were treating all schools during this dangerous period the same and taking steps to protect the lives of those around us."

Governor Beshear's office is reporting 2,898 new cases of coronavirus and 23 new deaths. As of December 16, Kentucky has recorded 230,693 positive cases on COVID-19; 2,262 Kentuckians have died from virus-related complications.

The state's positivity rate is 8.57%, the report said.

All 11 health facilities identified to receive initial shipments of the Pfizer COVID-19 vaccines in Kentucky confirms they have received shipments, Beshear said.

Beshear said the numbers were much lower than the previous two Tuesdays when cases were above 4,000.

Jefferson County continues to see a high number of cases with 418 reported.

Fifteen more people have been lost to the virus, bringing the total to 2,239.

The state’s current positivity rate is 8.53%.

Dr. Steven Stack explained during the news conference that the fall and winter surge is different from the spring and summer surges.

Stack also warned Kentuckians not to get too comfortable as Christmas and New Year’s approaches.

"Hospitals will get overrun. Right now, if you have existing conditions; it's not safe to go inside places without a mask. It's simply not safe."

Kentucky has confirmed 227,818 positive cases overall with 32,234 people recovering from the virus.

Who is getting the shot?

Gov. Andy Beshear said the state is working on getting reporting of those who and how many people have been vaccinated.

Beshear said the doctors who were vaccinated on Monday are doing fine.

Following a meeting with Dr. Deborah Birx of the White House Coronavirus Task Force, Governor Beshear held a briefing to share what they discussed.

Beshear said he and Birx discussed the dangerous stage the country is in with the virus and mitigation steps. Birx supports the steps Kentucky has taken to prevent the spread of the virus.

Birx shared a presentation with State Health Commissioner Dr. Stack, and he will share that information during the daily briefing at 4 p.m.

According to Birx, Kentucky could improve in youth COVID-19 testing.

Gov. Andy Beshear has laid out plans for schools returning to in-person learning as the Christmas holiday approaches.

Many school districts around the state are in their last week before a two-week winter break.

The Healthy at School guidelines outline adjustments for orange and red counties.

The governor said when a county is in the red zone, they can now move to remote learning or develop a hybrid model that will decrease the number of people inside schools.

Schools must accommodate all educators who may fall into a high-risk category with virtual options.

The guidelines will be mandatory beginning January 4, 2021.

The Kentucky Department of Public Health recommends returning to in-person learning no sooner than January 11, 2021.

Beshear said the reason why the Jan. 11 date is due to the cycle of the virus and those who could attend Christmas gatherings – even though Kentuckians should only have gatherings with those in the same household.

Gov. Andy Beshear has reported an additional 1,802 new cases of COVID-19 in Kentucky.

Beshear said this is the first decline in cases since the week of Oct. 12 through Oct. 18.

The positivity rate for the state is slightly up to 8.58%.

This morning, Kentucky's first doses of Pfizer's COVID-19 vaccine were transported to hospitals across the state, including three in Louisville.

Governor Beshear was present at University of Louisville Hospital where the first doses of the vaccine were administered to five front-line healthcare workers.

Also happening today, Kentucky restaurants and bars are allowed to reopen to indoor dining at 50% capacity after three weeks of COVID-19 restrictions. Guests are required to wear a mask unless they are actively eating or drinking and all restaurants and bars must stop service at 11 p.m., closing at midnight.