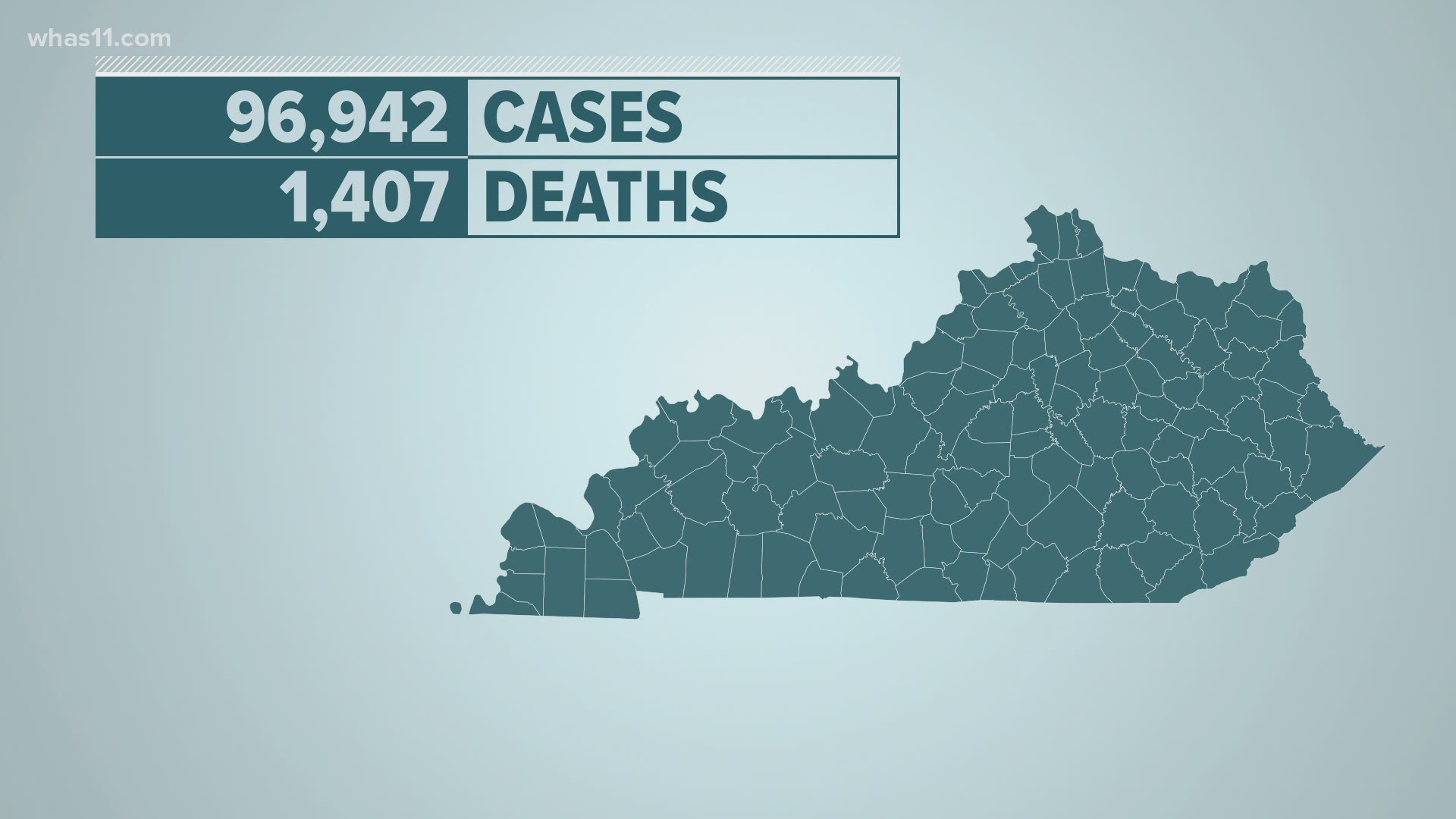 LOUISVILLE, Ky. — This is a weekly blog with real-time updates on COVID-19 numbers and other related content in Kentucky for the week of October 12, 2020. Governor Andy Beshear is scheduled to give updates Monday through Thursday at 4 p.m.

Gov. Andy Beshear said the Commonwealth is breaking records and not in a good way when it comes to the COVID-19 battle.

He confirmed 1,462 new positive cases of the virus which is the highest number ever reported on a Sunday.

Kentucky has also set a record for the number of weekly cases with 9,335. The previous highest week was Oct. 5 through Oct. 11 with 7,675 reported.

“We all know the steps we need to take to stop the spread of this virus – wear a facial covering, wash your hands, stay six feet apart and limit gatherings and travel – let’s all do these simple things to protect each other,” Beshear said.

Three new deaths were also reported with the latest numbers, bringing the total to 1,407 lost to the virus.

Beshear said he will also discuss new recommendations on Monday for counties that are listed in the red zone – those with 25 or more average daily cases per 100,000 residents.

Kentucky has confirmed 96,942 positive cases since tracking began in March.

Other numbers will be reported on Monday due to limited data.

Governor Andy Beshear announced 1,738 new cases of COVID-19 in Kentucky, bringing the total to 95,480. He said it is the state's highest total of new cases, except for a day when backlogged cases were added. The governor said today's report is "in a word, frightening."

Beshear said on Monday he will discuss new recommendations for "red" counties.

The governor also announced eight more Kentuckians died from the virus, bringing the total number of virus-related deaths in the state to 1,404.

“We’re all tired of COVID-19 and the problems it has brought,” said Dr. Steven Stack, commissioner of the Department for Public Health. “People are hurting, whether from the virus itself or the impact it has had on the rest of our lives. It’s all worse, though, when we don’t do simple things like wearing masks and socially distancing."

“This week has been a tough week, with three out of the five highest days for new COVID-19 cases,” said Gov. Beshear. “This virus is everywhere. It is in your community. We need every community doing what it takes to defeat it.”

The Governor will finish his two-week quarantine Saturday morning. The First Family has recently tested negative for the virus four times.

Top counties with the most positive cases are Jefferson, Fayette, Warren, Hardin and Barren.

A total of sixteen new deaths have been reported with a total of 1,378 Kentuckians lost.

1,330 new positive COVID-19 cases with a total of 92,299 Kentuckians infected. Thursday's cases mark the fourth highest reported since the beginning of the pandemic.

The top counties with the most positive cases are Jefferson, Fayette, Nelson, Hardin, Warren, and Barren.

A total of seventeen new deaths have been reported with a total of 1,380 Kentuckians lost.

The Governor implored all Kentuckians to take the virus seriously and shared three examples of other states dealing with preventable surges in cases and deaths. He said there is still time to prevent Kentucky from going the direction of Florida, Utah, and Wisconsin.

Gov. Beshear announced 1,487 new positive COVID-19 cases making it the second-highest reported since the beginning of the crisis with a positivity rate of 4.99 percent.

A total of 90,996 Kentuckians have been tested positive. 186 of the cases reported are from children 18-year-old and younger.

Gov. Andy Beshear on Wednesday said the White House is saying Kentuckians in red or orange counties shouldn’t have gatherings at all beyond their immediate families.

The Governor noted Kentucky already has guidance limiting to 10 or fewer people gatherings such as backyard barbecues and house parties, but the recommendation from the White House this week goes even further.

The Governor said the guidance is timely because he reported the highest number of cases ever reported on a single day, aside from the day when he reported a significant backlog of cases from Lexington.

The Governor also recognized Matt Coleman, a veteran and small-business owner in Louisville, who immediately made arrangements to donate his plasma after surviving the coronavirus, knowing it contains COVID-19 antibodies that may help others fight the disease.

Gov. Andy Beshear on Tuesday said as COVID-19 cases continue to increase, the state is beginning to prepare for a fall and winter surge in cases.

The First Family all tested negative for COVID-19 again today.

Today marks the fourth-highest number of daily COVID-19 cases reported in the commonwealth, including the day a backlog in cases was reported. This is also the first time since August that the state’s positivity rate has been higher than 5%.

“Today’s report is grim. It is grim because it shows that we are not just continuing in our third escalation, but this one is probably now the second most worrisome escalation we have seen surpassed only by that original March increase,” said Gov. Beshear.

The Governor announced that due to this escalation, the commonwealth has renewed state surge preparations, including reviewing plans about the capacity in hospitals, examining possible hotel options, if needed, as well as the use of state parks. The state is also ensuring operational plans are in place to stand up a field hospital, if necessary.

“Our cases continue to go up, our hospitalization continues to go up and we continue to see more people in the ICU. And if we can’t get everybody’s buy in and we can’t get more people doing the right thing each and every day, my concern is that we are going to experience a real surge that we must avoid,” said Gov. Beshear. “But if we’re going to face it, I want you to know that we are spending our time getting prepared.”

The Governor also paid tribute to another Kentuckian lost to COVID-19, 89-year-old Rev. Robert L. Boyd of Cadiz, who is remembered as a hero and veteran. Rev. Boyd was a pastor of 35 years, a boxer, farmer and historian. Gov. Beshear said Rev. Boyd was a family member of one of the Governor’s security detail. The Governor said family was everything to Rev. Boyd. He was a beloved father, grandfather, great-grandfather, brother, uncle, cousin and friend. So many who will carry his strength and encouragement in their hearts loved him, the Governor said.

Jefferson County is now considered in the red zone after an increase in confirmed cases.

Tuesday the county announced more than 1500 positive COVID-19 cases with a positivity rate of 5.8 percent and eight new deaths

Doctor Sarah Moyer said people are not following the restrictions the county has in place and people are getting sick from those small gatherings, from eating out, from working in small groups.

Gov. Beshear said officials will be updating the travel advisory but not issuing a ban. He said they are not looking at anymore restrictions but stresses the state has to get the increase in COVID-19 numbers down. He said if not, there's a possibility White House officials will likely ask the state to restrict bars and restaurants.

Lt. Governor Jacqueline Coleman said 162 schools have not reported any data and the K-12 dashboard has been active for three weeks.

Gov. Andy Beshear gave tribute to 49-year-old Ruthie Martinez, a Lexington teacher who passed away from the coronavirus.

Credit: Governor's office
Ruthie Martinez, a 49-year-old teacher from Lexington, passed away from the coronavirus.

Gov. Andy Beshear announced 647 new positive COVID-19 cases. The statewide total now stands at 88,247. The governor said this is the largest number of cases they've seen on a Monday.

The governor also mentioned the state is within a third escalation of positive cases.

Eighty-one children in the 18-year-old and under demographic also tested positive.

Nine more Kentuckians have been lost to the virus. A 73-year-old Jefferson County man was among the deaths. So far, Kentucky has confirmed 1,326 deaths.

Gov. Andy Beshear said he and his family are continuing to do well, a week after a person in his security detail tested positive for the coronavirus. He said the family tested negative Friday but still remain in quarantine.

State officials announced they will begin using PCR tests to get a better look at monitoring Kentucky's COVID-19 positivity rate.

Dr. Steven Stack said some of the benefits of using the tests include, automated data collection, a stable data stream, excluding tests outside at 7-day window and a quick turnaround on testing results.