“Once again, we are seeing our case numbers growing instead of shrinking and we must do better,” Gov. Beshear said. 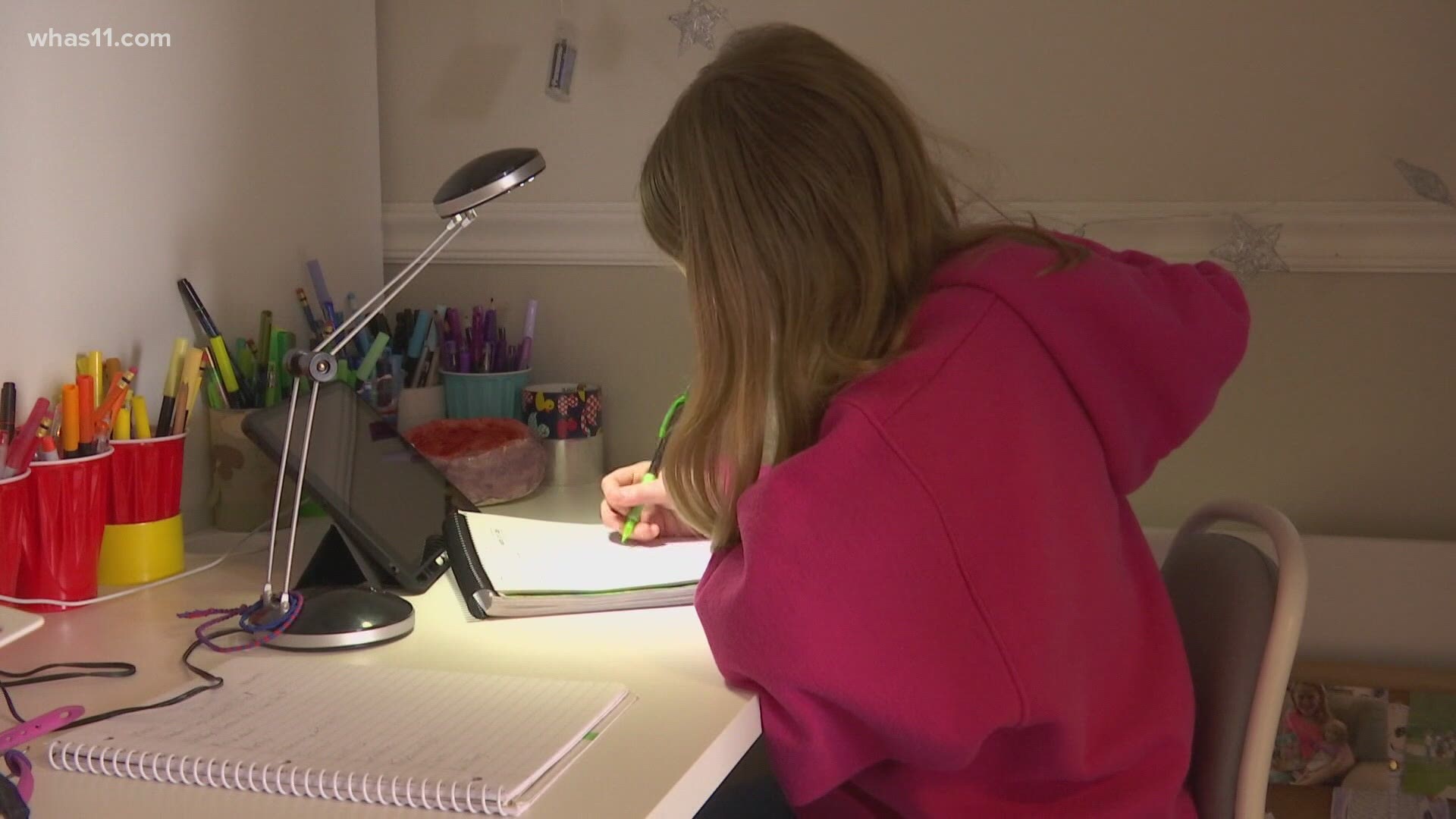 LOUISVILLE, Ky. — This is a weekly blog with real-time updates on COVID-19 numbers and other related content in Kentucky for the week of October 12, 2020. Governor Andy Beshear is scheduled to give updates Monday through Thursday at 4 p.m.

Governor Beshear announced at least 87,607 coronavirus cases in Kentucky, 812 of which were newly reported Sunday. One hundred and sixteen of the newly reported cases were from children up through age 18, of which 28 were 5 and under. The youngest was just 1 month old.

“That’s five more families grieving another loved one lost to the coronavirus,” the Governor said. “Let’s remember to light our houses and businesses up green to show them we care and ring bells at 10 a.m. to honor these Kentuckians taken from us too soon.”

“As presented over the course of the past week, starting tomorrow, Kentucky will use COVID-19 PCR tests that are sent electronically to calculate the statewide test positivity rate,” said Dr. Steven Stack, commissioner of the Department for Public Health. “PCR tests are the most reliable test for finding active disease in those currently infected and more than 90% of all COVID-19 tests currently performed in Kentucky are PCR tests.”

Dr. Stack reiterated the four main benefits of using electronically reported PCR tests to calculate the positivity rate: automated collection of data, a more stable data stream, filtered for the past seven days and a quick turnaround on testing results.

“We are in a once-in-a-century global pandemic. Lives are continuing to be affected and lives are being lost to this virus,” said Dr. Stack. “Each Kentuckian has to do their part to limit the spread: socially distance, wear masks, and practice good hand hygiene.”

Due to limited reporting on Sundays, some information will be delayed until Monday.

Gov. Beshear said there were 1,295 newly reported coronavirus cases. The total of cases since March is now at 86,797 for the commonwealth.

Beshear reported 12 new deaths Saturday. The total number of Kentuckians now lost to the virus is 1,312.

“These cases are all over the place. On top of that, all of our other numbers are going the wrong way, too. More Kentuckians hospitalized and in the ICU than ever,” said Gov. Beshear. “We know what it takes to stop these numbers from escalating. People’s lives depend on it.”

Of the more than twelve hundred new cases, Beshear said 162 of them were from children up through age 18 and 27 were 5 and under. The youngest was just 7 days old, Beshear's office said.

Gov. Beshear said there are  1,319 new cases of COVID-19 being reported on Friday and 85,506 COVID-19 cases in Kentucky so far this year. Beshear also reported four new deaths. Since March, 1,300 Kentuckians have been lost to the virus.

“Our COVID report today adds to a tough week,” said Gov. Beshear. “We need to buckle down; we need to wear masks; we need to follow that rule of no gatherings above 10 people at our homes. We need to social distance and we shouldn’t play politics with this virus. It is real. It doesn’t matter if there’s an election a couple of weeks away,” Beshear said in the news release.

There have been at least 1,773,349 coronavirus tests performed in Kentucky. The positivity rate was 4.70%, and at least 17,018 Kentuckians have recovered from the virus, as of October 16.

Update on Gov. Beshear, his family, and the security person who tested positive:

Governor Beshear said he, the First Lady and their children, Will and Lila, are all still feeling great. They continue to test negative for COVID-19 and have been keeping a positive attitude about their quarantine, enjoying the extra time with each other and their dog, Winnie.

The member of the Governor’s security detail who tested positive for COVID-19 is still experiencing mild symptoms, but doing well.

Gov. Beshear said there were at least 84,195 COVID-19 cases in Kentucky, 1,260 of which were newly reported Thursday. There were 168 newly reported cases from children up to age 18, of which 29 were children five and under. The youngest was only five months old.

“We just can’t ignore it. We can’t pretend like it’s not here,” said Gov. Beshear. “We can’t allow the fact that we are inconvenienced make us pretend that the virus isn’t with us and isn’t deadly.”

“Today is a really hard day. The individuals lost today and their families need our help, need our green lights, and need our bells at 10 a.m. every morning,” said Gov. Beshear. “I can’t tell you how painful it is to read 20 entries. We are going to have a lot more days like this if we don’t do better about wearing masks, about social distancing and about following the rules.”

As of Thursday, there have been at least 1,751,264 coronavirus tests performed in Kentucky. The positivity rate was 4.94%, and at least 16,928 Kentuckians have recovered from the virus.

Of the newly reported, 171 cases were from children up to age 18, of which 34 were age 5 and under. The youngest was just two months old.

This was the most coronavirus cases reported in Kentucky in a single day that didn’t include a backlogged set of cases, as happened recently when some Fayette County case numbers were added.

The governor also said two Kentucky veterans who were at the Thomson-Hood Veterans Center in Wilmore were among those who died from COVID-19.

“They were at the Lexington VA,” he said. “Those are now the second and third veterans in our nursing homes who we have lost. It’s another reason to make sure we’re doing everything we can to stop the spread of this virus.”

As of Wednesday, there have been at least 1,718,621 coronavirus tests performed in Kentucky. The positivity rate was 4.72%, and at least 16,756 Kentuckians have recovered from the virus.

For additional information, including up-to-date lists of positive cases and deaths, as well as breakdowns of coronavirus infections by county, race and ethnicity, click here. To see all recent daily reports, click here.

Information about COVID-19 and schools is also being made available. To view the reports, click here for K-12 and here for colleges and universities.

“We believe health care is not a privilege, an add-on to sweeten a job offer, a luxury or a convenience. Health care is a right for every Kentuckian,” the Lieutenant Governor said. “That is especially true for children.”

She urged eligible families to sign up for the Kentucky Children’s Health Insurance Program, or KCHIP, by visiting kidshealth.ky.gov or calling 877-KCHIP-18, or 877-524-4718.

“We are asking for nominations from parents, students, schools, school districts and non-profit organizations,” she said. “We are looking for nominees who demonstrate excellence in leadership, commitment and community involvement.”

Nominations can be made by visiting education.ky.gov. The deadline for nominations is Oct. 16.

Finally, Lt. Gov. Coleman thanked everyone who has participated in First Lady Britainy Beshear’s Coverings for Kids program, which provides school districts across the commonwealth with a supply of face masks for students. She noted that while the program is ending at the end of October, there is still time to take part.

For information and instructions on making masks, visit firstlady.ky.gov/coveringsforkids.

He encouraged residents to take advantage of more than 300 testing locations throughout the Commonwealth, which can be found at kycovid19.ky.gov. Dr. Stack also highlighted new partnerships in some areas that need service.

“One of the central missions of public health is to try to help make sure underserved and disadvantaged individuals have access to health care just like everybody else,” Dr. Stack said.

Dr. Stack also reminded everyone that, beginning next week, Kentucky will change the way it calculates the positivity rate. Going forward, Kentucky will use COVID-19 PCR tests that are sent in electronically to make the calculation.

“PCR tests are the gold standard – those are the most reliable – for finding active disease in currently infected people,” Dr. Stack said.

Dr. Stack said there were four main benefits to moving to using the PCR tests to calculate the positivity rate: automated collection of data, a more stable data stream, filter for the past seven days and a quick turnaround on testing results.

Gov. Beshear emphasized that the change will not take place until next week to give everyone – hospitals, state officials, media and citizens – enough time to analyze and ask questions about the move before it happens.

He said he and his family have tested negative for the virus but still remained optimistic after being exposed by a member of his security detail who tested positive and had mild symptoms. The governor said he will be tested again on Friday.

"We are doing great. My family and I tested negative again today but it is early. WE have a positive attitude for the most part but I have a 10 and 12-year-old. Brittany is a trooper."

He said 142 of the newly confirmed cases were in Jefferson County.

One hundred-eleven of those cases were found in those 18 and younger.

Beshear also announced 14 more people who have been lost to the virus. It brings the number to 1,269 overall.

More than 1.7 million COVID tests have been given.

The current positivity rate is 4.59%.

Lt. Governor Jacqueline Coleman stated 200 Kentucky schools have failed to report any COVID-19 data for a single day. She reported 171 new cases among students and 70 in staff members.

She said 798 students and 137 staff members are currently quarantined.

He said Kentucky is in the red zone – 63% of all counties are at moderate or high level of community transmission.

The governor said he and his family feel "great," saying they are making the most of the family time they have. Beshear also said the member of his security detail who tested positive has mild symptoms.

Beshear's said the daily total was the most Kentucky has seen on a Monday, which usually shows the lowest amount of cases following a weekend.

The governor announced 643 new cases, bringing the state's total to 80,930 cases. Dr. Steven Stack said he remains concerned that the state is in an escalating situation, but said the numbers continue to be within people's ability to influence.

"You can see a steady increase," Beshear said. "That means we've got to do better, because we have more contacts out there...We want to spread out the amount of contacts we have on any given day."

The state's positivity rate is at 4.37%, with Beshear saying the state needs to continue to push the rate down.

Currently, 672 people are hospitalized, 180 in the ICU and 93 currently on ventilators. The governor announced three deaths.

Stack said people, including those who are young and healthy, need to continue to double down on their efforts -- pointing to a Louisville high schooler who was hospitalized with inflammation symptoms months after testing positive.

As of Sunday: Kentucky currently stands at 80,292 cases reported and 1,252 deaths associated with the virus since tracking began in March.