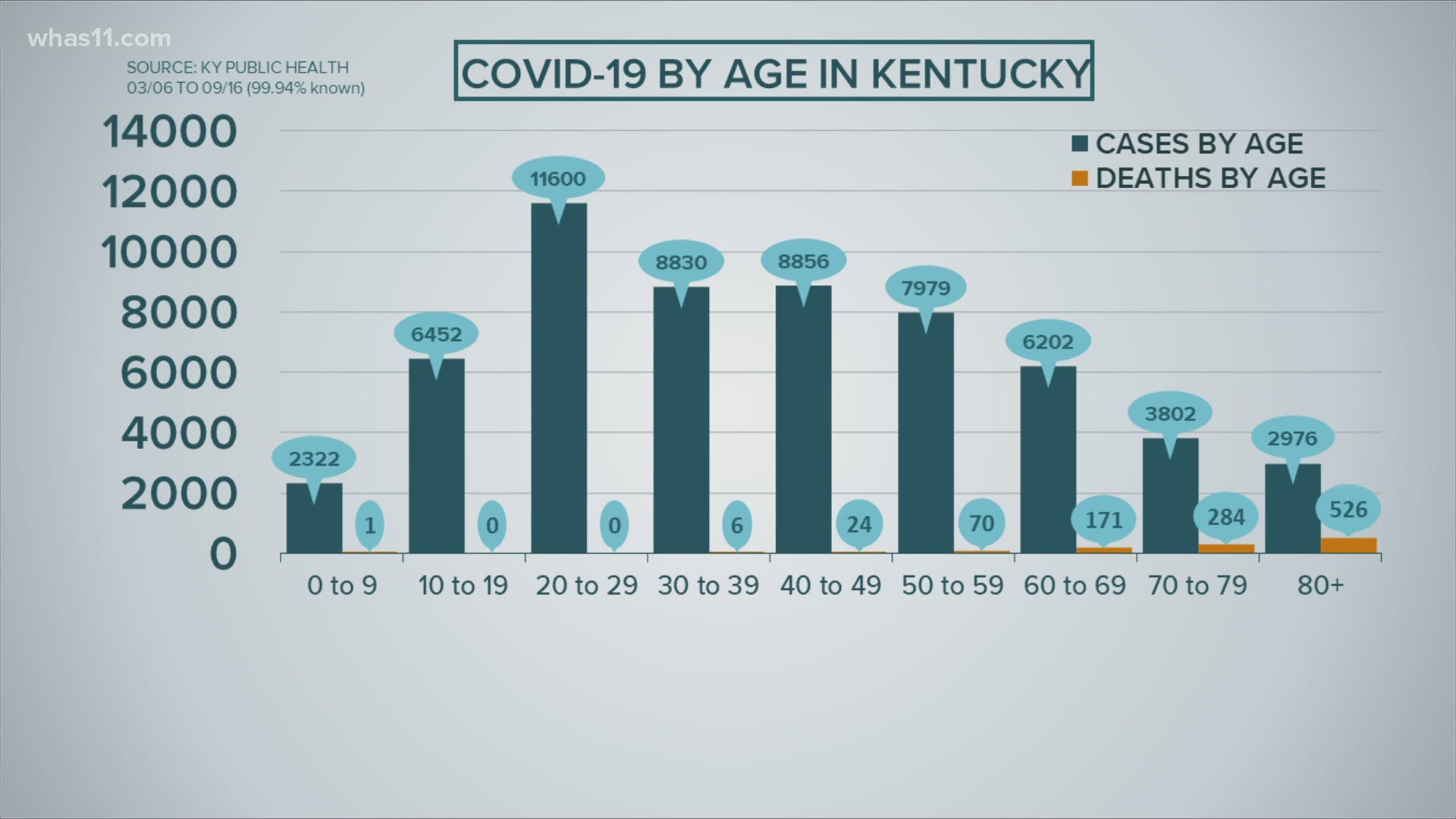 LOUISVILLE, Ky. — This is a weekly blog with real-time updates on COVID-19 numbers and other related content in Kentucky for the week of September 14, 2020. Governor Andy Beshear is scheduled to give updates every day around 4 p.m.

Last week Beshear's office had a wreath-laying ceremony after Kentucky surpassed 1,000 deaths. Beshear also did an 'Address to the State' to remind Kentuckians to do the right thing to stop the spread.

The governor also announced the White House's updated list of "red zones," which are counties with a 10% positivity rate or higher. For the first time since giving reports, Beshear said Jefferson and Fayette counties were not considered red zones.

The two counties, along with Bullitt, Hardin, Oldham, Spencer and other nearby counties, were listed in the "yellow zone" with a positivity rate between 5-10%. Warren, Christian, Laurel, Green, Union, Lewis, Logan Grayson, Monroe, Russell, Trigg, Marshall and Livingston counties were red zones.

Kentucky has reported 745 new cases of COVID-19 with 95 of those cases found in those 18 and younger.

Jefferson County has 131 of those new cases.

Gov. Andy Beshear said the positivity rate has dipped below 4% with current rate now standing at 3.97%.

Nine more Kentuckians have passed away from the virus, bringing the total to 1,074 lost.

Gov. Beshear has also revised guidelines for bars and restaurants. With the start of sporting events, the governor said facilities were asking to extend their hours.

All facilities must finish up and be closed by midnight, according to Beshear.

Gov. Beshear said the White House wanted the state to close bars completely in red counties and have restaurants open at 25% capacity.

He said officials were trying to safely exceed that and to keep people from having house parties.

He added that as the night goes on, people have the tendency to get more laxed and they’re trying to find a happy medium.

Fifty-four of the cases were found in the 18 and under demographic.

Gov. Beshear also announced 5 new deaths which includes a 49-year-old from Shelby County. The total of Kentuckians lost to the virus jumps up to 1,065.

The positivity rate for the state is 4.17%

Kentucky has also conducted more than a million COVID-19 tests.

State officials also announced that there would not be another recommendation post Sept. 28 on whether schools should open in-person instruction, virtual or hybrid.

Beshear also said there has been no recommendation on how families in Kentucky should handle Halloween. 'We're still thinking through Halloween," Besheard said when the question came up.

PPE donation: Monday, Gov. Andy Beshear announced a big personal protective equipment (PPE) donation from Ford. Ford's Project Apollo is the work of some of company's top engineers and members of the United Auto Workers whose goal is to produce 100 million masks through 2021.

Ford, based in Michigan and operates the Kentucky Truck Plant in Louisville.