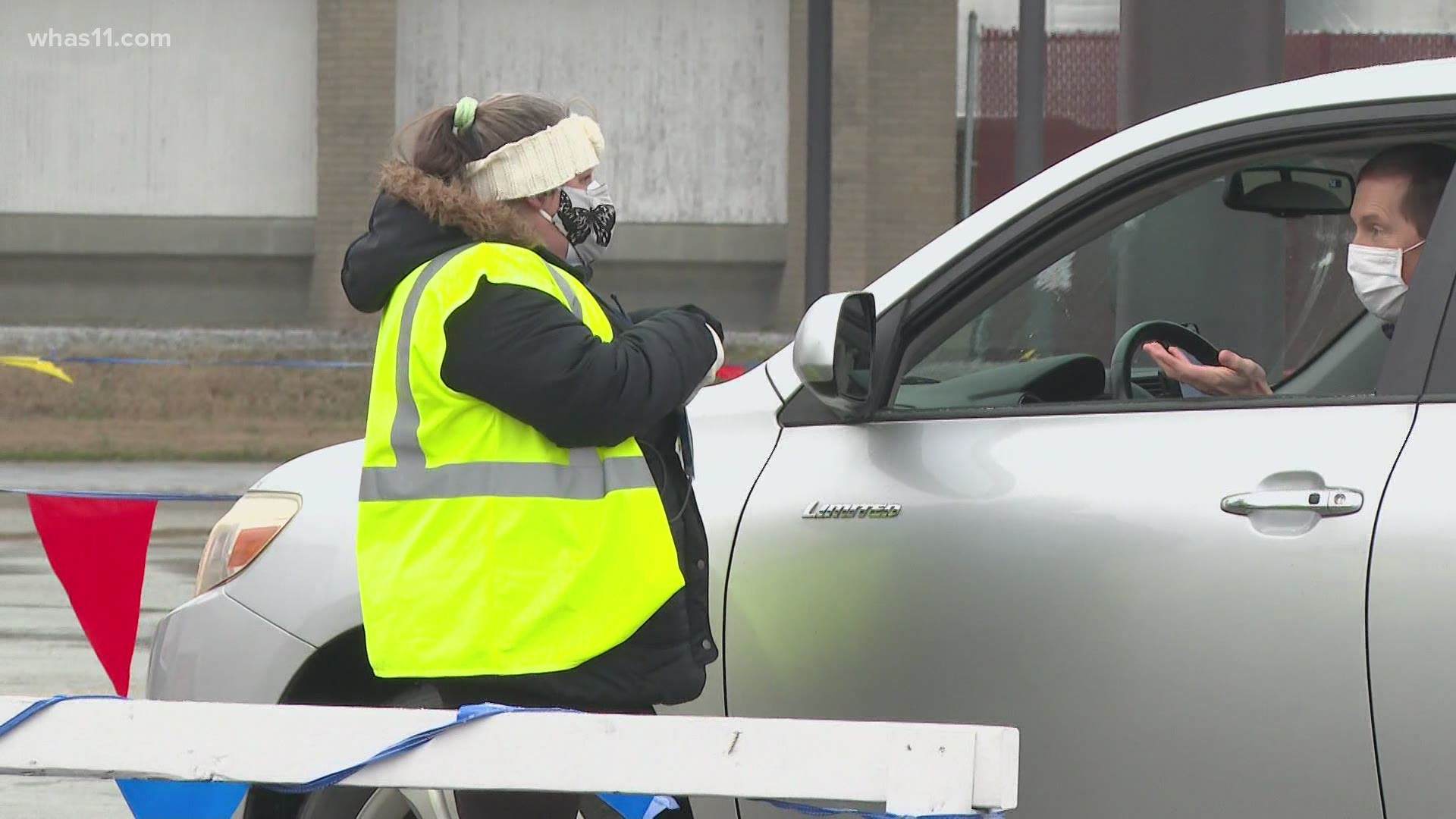 Gov. Andy Beshear says Kentucky is continuing to see a decline in new COVID-19 cases for a fifth consecutive week as 1,710 more cases were announced Sunday.

The positivity rate for the Commonwealth also remains under 7% for a third consecutive day.

Officials said in addition to the 6.87% positivity rate, they reported 769 new cases on Saturday.

Kentucky’s has reported 387,090 positive cases and 4,272 deaths since tracking began nearly a year ago.

Governor Andy Beshear confirmed there are 1,880 new cases of COVID-19 in Kentucky and 36 more people have died.

A total of 497,256 unique individuals have received the COVID-19 vaccine in Kentucky.

The governor announced the Healthy at Home Eviction Relief Fund which will help tenants pay past-due rent and utility bills. All Kentucky counties outside of Jefferson and Fayette may apply at teamkyhherf.ky.gov. Those living in Jefferson County may apply for rental assistance at stopmyeviction.org.

Norton Healthcare will be working directly with two churches in Louisville to vaccinate at-risk, underserved individuals aged 70 and up. Pop-up locations will be set up at St. Stephen Baptist Church and Bates Memorial Baptist Church.

Appointments are required at all locations. Kentucky is currently vaccinating individuals in groups 1A and 1B. To find a vaccination location near you, visit vaccine.ky.gov or call 855 -598-2246 (deaf or hard of hearing call 855-326-5654.)

The new regional sites are:

Kentuckians can see a full list of new regional sites here. Learn more about signing for appointments at all regional vaccination sites here.

See a full list of Walgreens and Good Neighbor pharmacies here. Sign up for a Walgreens appointment here.

If you believe a fraudulent unemployment insurance claim has been filed in your name, reach out to uifraud@ky.gov. If you receive a paper unemployment check in the mail when you do not believe you should have, mail it back to the Office of Unemployment.

“We are still seeing far too many deaths, but this decreased positivity rate is a really hopeful leading indicator,” Gov. Beshear said in a release.

The state's test positivity rate is 7.5%

Thirty-five new deaths were reported, 16 of those were confirmed in Jefferson County alone.

The county reported 396 new cases bringing the overall total to 69,131.

State officials also reported 409 of the cases reported Tuesday were found in those 18-years-old and under.

Statewide the positivity dipped a tad to 7.66% compared to Monday.

Beshear said the hospitalization numbers are up slightly but are within normal fluctuation.

Gov. Beshear said the Biden administration is increasing the vaccine supply to Kentucky. The state will receive about 6% more in dosages. Next week, the state will get about 71,675 vaccines compared to the 56,175 doses received about three weeks ago.

Gov. Beshear also mentioned that the state is closing three regional vaccine sites on Thursday ahead of winter weather.

Those sites are in Lexington, Bowling Green and Covington and they are operated by Kroger.

“We want you to be safe and we want you to be careful and so we have to try to set an example. And I've got to tell you, I've gotten to meet a lot of these volunteers and employees that are out at these sites. If the weather is what we think it's going to be, we can't have them out on the roads because we need their help vaccinating us the entire rest of this pandemic,” Beshear said.

He said he knows people will be disappointed, but those appointments will be rescheduled as early as this weekend.

Mayor Greg Fischer says if the Lou Vax site at Broadbent Arena has to close for weather, do not freak out, your vaccine will be reserved and you will get your shot when they can pick back up.

Gov. Andy Beshear says the state continues to see a downward trend in positive cases when it comes to COVID-19.

He announced 1,003 cases, the lowest number since Dec. 26, 2020. Jefferson County was the only county in the state to have triple digit cases with 205.

With this positive news, Kentucky continues to see a high number of deaths associated with the virus. The governor also announced 40 new cases.

Beshear said Kentucky is down to 95 counties in the red zone.

Four areas of the state that are usually in the red when it comes to hospital capacity are now down to two; He said just because it's going down doesn't mean that it isn't too high.

When it comes to vaccinations Beshear said 91% of all 1st dose vaccines have been received and given. That total number is 444,930 just through the state and long term care program.

The state’s vaccination program has received 410,050 first doses and administered 375,728.

The federal long-term care vaccination program run through CVS and Walgreens has sent 80,925 first doses to Kentucky and the program has administered 69,202.

The federal government has vaccinated 17,186 Kentuckians as well, in the Bureau of Prisons, the Veterans Administration and in the Department of Defense.

The new federal pharmacy vaccination program will also start at the end of this week. It has two major partners in the state: a number of Walgreens locations and a large group of independent pharmacies.

“Walgreens is a great partner, but it didn’t have sufficient coverage in rural Kentucky, so we advocated for the program to include independent pharmacies, too,” said Gov. Beshear.

Kentucky has confirmed 378,793 cases and 4,091 total deaths since the pandemic began.

As of Sunday, Kentucky had confirmed a total of 377,790 coronavirus cases and 4,051 total deaths due to the virus.

According to the governor, case numbers have been declining for four weeks, but deaths have increased.