'We are not moving the right direction': Kentucky confirms 2,217 new cases of COVID-19

The state's test positivity rate has increased to more than 10%. 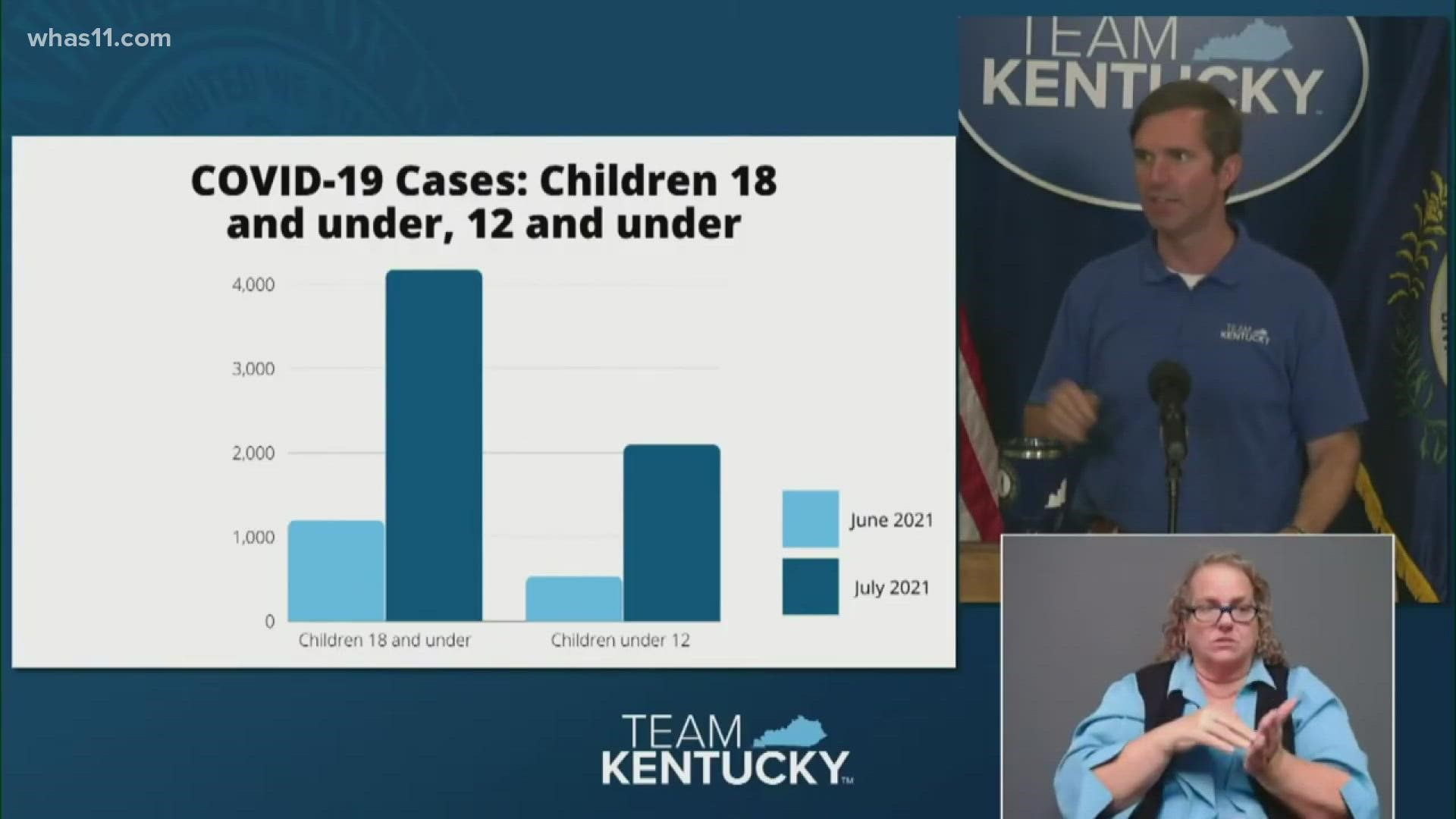 Kentucky reported the highest number of daily COVID-19 cases since early February, with 2,583 newly reported cases. The state's test positivity rate has increased to more than 10%.

“We are not moving the right direction, and remember, with more cases comes more death,” Governor Andy Beshear said in a video update posted on social media.

The governor also announced ten more deaths, including a 21-year-old.

“This is serious. The delta variant is real, and we need have to be willing to do what it takes,” Beshear said.

He urged unvaccinated Kentuckians to get the vaccine at one of the states many vaccination sites. And he asked that all Kentuckians, regardless of vaccination status, mask up while indoors, away from home, saying "it’s not forever. It’s just for now."

Today I am announcing 2,583 newly reported cases of COVID-19 in Kentucky, the highest report since Feb. 3. Kentucky’s positivity rate has also increased to above 10%. The delta variant is serious and real and we have to be willing to do what it takes to protect our people. pic.twitter.com/ApGdOjOvnU

During a press briefing, Louisville Mayor Greg Fischer asked people to keep the city safe by wearing masks in public, indoor settings and getting the vaccine.

Jefferson County is currently in the "orange zone" but quickly approaching the "red zone" as COVID-19 cases rise. Officials said Jefferson County is seeing it's highly weekly case count in six months, and there was an increase in those receiving their first dose of the vaccine last week.

"People who have been vaccinated, fully vaccinated, when they get infected if they do have a breakthrough they're either asymptomatic, they have very minimal symptoms and very, very few are practically unlikely are ones to be hospitalized and there have been no deaths," Dr. Mark Burns of UofL said.

Officials said it's important to get vaccinated and continue wearing a mask as children are return to school, as those under the age of 12 cannot get vaccinated. Burns believes a vaccine for children under 12 could be available this winter.

Gov. Andy Beshear said vaccines are becoming increasing important as Kentucky has seen more positive cases of COVID-19 since February – before the vaccine was readily available.

The governor said Kentucky has had 38 consecutive days of increasing positivity rate which he says is concerning. The positivity rate has jumped 8 points since June and currently stands at 9.77%.

“You are very protected if you get the vaccine,” Gov. Beshear said. “If you’re unvaccinated, your likelihood of being in the hospital is higher than it’s ever been.”

He said there were now 74 counties that have returned to a red zones. Those counties are required to follow the red zone recommendations issued throughout the pandemic.

Since more cases of the Delta variant are being reported, Gov. Beshear was asked if he would be considering rolling back capacity limits.

He said, “At this time I'm not looking at rolling back capacity limits because as long as you put on a mask in a red county, you're fine with more people. If everybody would get vaccinated in the county, we wouldn't even need that. With the combination, we should be okay. These are two weapons we've never had together.”

Specifically now, health officials say the variant is targeting younger people at a higher clip -- something Louisville doctors are seeing here too.

"The rate at which they're coming is much much higher than it was initially during the peak," said Dr. Mark Burns, who works within the infectious disease department at University of Louisville Health.

Specifically now, the variant is targeting younger people at a higher clip, something Louisville doctors are seeing here too.

"I would estimate that the average age is between 35 and 40," Dr. Burns said.

So what does this mean for you?

"We're going to require that we wear masks," said Eric Friedlander, secretary of the Kentucky Cabinet for Health and Family Services -- speaking about state-run healthcare facilities.

And as far as hospitalizations go, we're told as of now supply isn't an issue.

But according to Gov. Beshear, the effects on each individual are already problems.

"But now when they come in, the patients need a lot more care," Gov. Beshear said.

Still, Gov. Beshear says the economy will push on, and for now, major capacity limits will remain in the past.

And as for a return to a statewide mask requirement?

"We are not taking the potential for a mask mandate off the table, but the circumstances are very different -- and that is the vaccine," Gov. Beshear said.

Gov. Beshear says he wanted to be very clear that his office is not looking into a statewide mask mandate at this time. But if they did, they would first look into transmission rates among vaccinated people, and whether hospitals are filling up to capacity, before making that choice.

Other numbers reported on Monday:

Kentucky Cabinet for Health and Family Services announced universal masking would be required in all state-run health facilities which include veterans nursing homes beginning Aug. 3.

The cabinet is also requiring all contractors and state employees working at the state-operated facilities to be fully vaccinated by Oct. 1 unless they have a religious or medical reason that they cannot be vaccinated.

If they are not, they will be subject testing at least twice weekly.

Meanwhile, Louisville hospitals are implementing their own vaccine requirements for their workers.

The Kentucky State Fair is a little more than two weeks away and officials are already putting plans in place for masking.

Gov. Andy Beshear recently announced the requirement of facial coverings inside state office buildings, the Fair Board says to expect the same when attending exhibits at the State Fair.

In a tweet posted Monday afternoon, officials said masks will be required indoors at the Fair but not required outdoors.

They said they are looking forward to seeing everyone at this year’s fair.

Gov. Andy Beshear is expected to return to the podium to give an update as more cases of the COVID-19 Delta variant are found in Kentucky.

His administration has already made universal masking recommendations as districts across the state begin heading back to school.

Beshear also announced state employees and visitors will be required to wear masks inside state buildings.

In data released Friday, Kentucky reported 1,648 positive cases of COVID-19 and 7 deaths. No data was released on Saturday or Sunday.

Beshear’s press conference is expected to begin at 4 p.m.