After near-death experience, COVID-19 patient says vaccine is 'light at the end of the tunnel'

At just 34 years old, Louisville resident, Andy Smith, spent 45 days in the hospital, including the ICU. 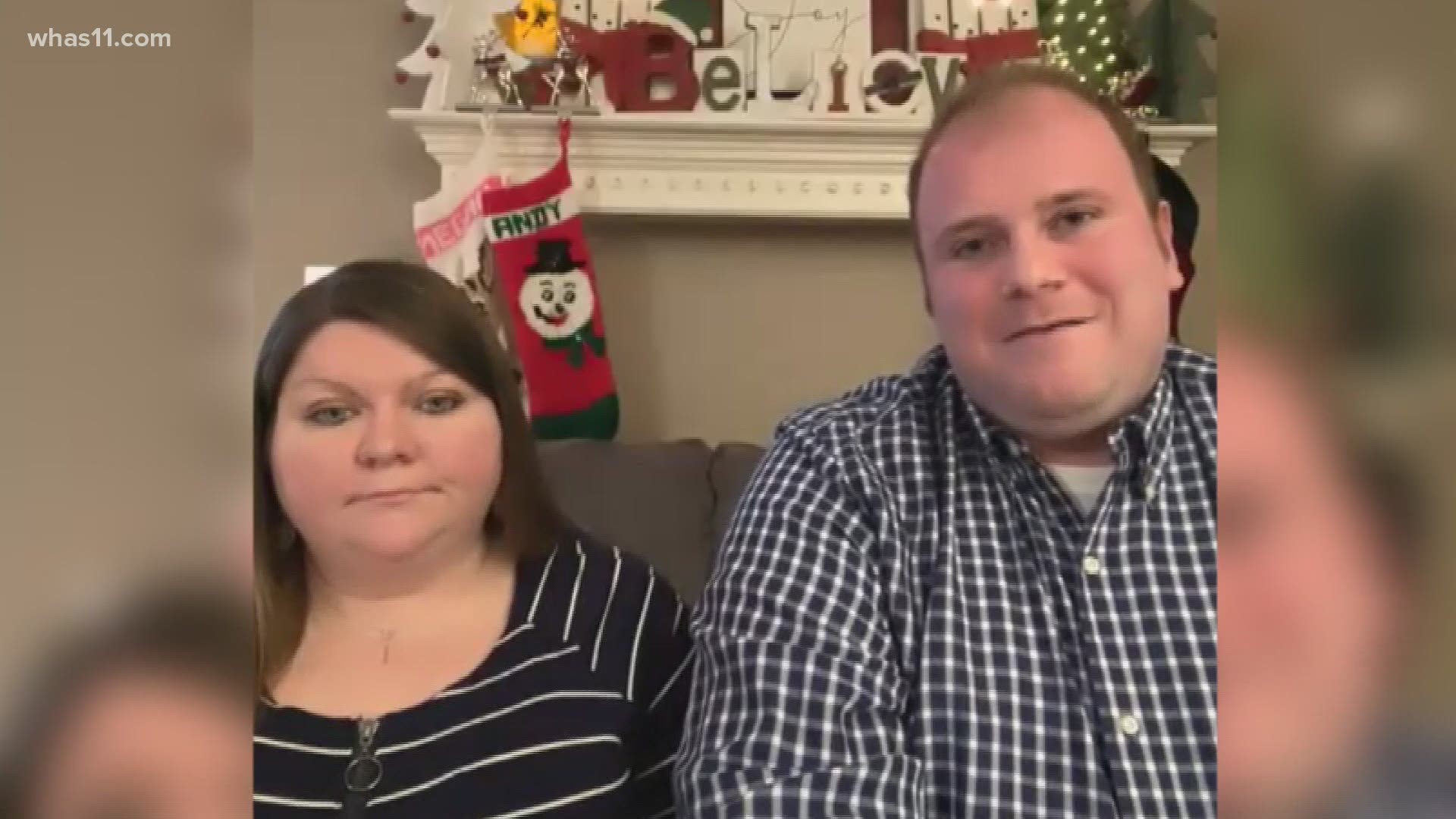 Two of the first UofL Health doctors to receive the Pfizer vaccine this week, had also helped save one man's life. That man said the vaccine is giving him hope after the long journey he spent battling coronavirus and nearly dying.

At just 34 years old, Louisville resident, Andy Smith, spent 45 days in the hospital, including the ICU. But it was a rarely used treatment at UofL Health- Jewish Hospital that his family said is the reason he's alive today.

"Getting the call that Saturday morning that he had 24 hours to live, that was pretty bad," Andy's wife Megan said. "He's a fighter. I didn't believe that his journey was over yet."

Doctors told Megan that Andy had a 50/50 chance of surviving. Andy first found out he had contracted COVID-19 in August, after what the family believed to be a safe family summer gathering at a backyard pool. Andy developed mild symptoms initially that quickly escalated into two emergency room visits.

"First couple days it was pretty normal. At home, running fevers, tired, I was isolating myself upstairs in the bedroom," he said. “Other than that I was feeling alright. I was kind of on the fence, should I go back to emergency room or not?”

Once Andy went to the ER for the second time, he was admitted, and his symptoms got more serious.

RELATED: VERIFY: False lists of coronavirus vaccine side effects vs. the facts

"At one point they told me I wasn’t medically stable enough to get out of the bed, that I needed to rest and rest my lungs because my oxygen was dipping every time I got up out of the bed," Andy recalled. "This is my last experience at the other hospital that I really remember, was them coming in there saying my right lung had partially collapsed so they were going to have to do a chest tube. I remember them putting in the chest tube and then my memory kind of fades in and out after that.”

It was at that point doctors began talking to Andy's wife about end-of-life decisions.

Andy's mom and his wife Megan then saw news of a treatment called ECMO at UofL Health Jewish Hospital, and the same day he was given 24 hours to live, his case was accepted and he was immediately transferred to Jewish Hospital.

"It's kind of a step of last resort," Dr. Victor van Berkel, Division Chief of Thoracic Surgery and UofL Health- Jewish Hospital said. "Drawing their blood out of their body, oxygenating the blood with a machine and then giving the blood back to them oxygenated so their heart still pumps the blood around, but the machine does all the work of their lungs for them.”

Dr. Victor Van Berkel oversaw Andy's treatment, the use of a machine that seeks to help patients survive when the lungs and even a ventilator aren't strong enough.

"There aren’t very many people that get so sick that we need to do something like that," Dr. van Berkel said. "The majority of people who get COVID are not going to need something like this."

Dr. van Berkel said ECMO is a very limited resource. It has been used for lung transplants, post-heart surgery, and during the H1N1 epidemic. Currently, UofL Health- Jewish as the capacity to treat three patients on ECMO.

After starting ECMO, Andy was off it within five days.

"We've had some people that had to be on ECMO for a month before their lungs recovered to the point where they could get better and honest that’s sort of what I was expecting for Andy, Dr. van Berkel said. "Only having to be on ECMO for five days was remarkable."

Megan said when she got the call it was a "miracle." From there, Andy began his road of rehabilitation and recovery, eventually discharging from the hospital Oct. 3.

Andy and Megan said seeing the first of the community get vaccinated this week has given them hope. Two of the first five healthcare workers at UofL Health were doctors who treated Andy.

"There's a light at the end of the tunnel and we just need to remain strong," Andy said. "Even though I show antibodies now, we don't know how long immunity lasts and I just think it's important that everybody get vaccinated, that we stay strong, continue to mask up and social distance.”

The Smiths also said they urge families to be careful this holiday season.

"You want to see those same people at your table next year and without ECMO and everything with Andy, we wouldn’t have him here this year probably.”

"You kind of let your guard down one time. I just don’t want that to happen to someone else over the holiday season and their family to experience what my family has experienced," Andy said. "It put not only three of us in the hospital, two of us in ICU and ventilators, so it's definitely something I want everyone to take serious.”