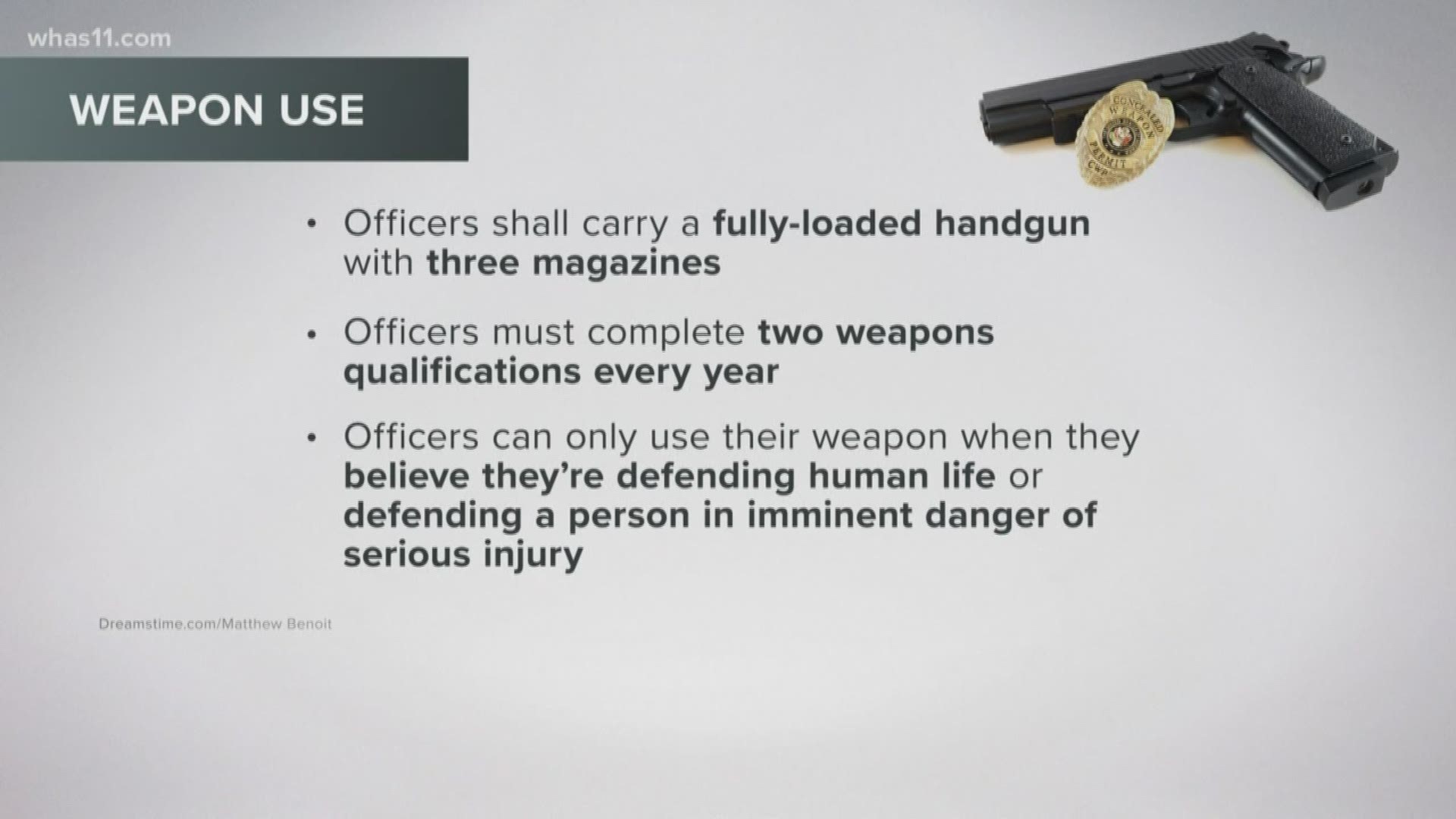 LOUISVILLE, Ky. — Jefferson County Public Schools is one step away from possible armed safety officers inside its schools.

Even as the board nears a final vote, some are still speaking out in opposition of arming school safety officers.

"We're talking about kids. Children. Get it together," Chanelle Helm said at Tuesday's board policy committee meeting.

"I just feel like its a matter of time before something worse happens if we have more police and more guns in the schools," Sonja Devries, another local activist said at Tuesday's meeting.

Despite their concerns, at this stage in the plans and procedures, much is likely to change. The current plan the board policy committee is reviewing would arm officers. The SSO's, who are stationed inside the schools, would carry a handgun with three fully loaded magazines, be required to complete two weapons qualifications per year, and able to use their weapon only if they believe they're defending a human life.

RELATED: Will armed school resource officers be removed from the halls of JCPS?

"I don't see any evidence of it making the schools safer to have more police and more security with guns," Devries said.

One revision in the JCPS plan revealed Tuesday, is that officers would be required to conceal their holster at all times. That prompted some board members to question why the SSO's would have three magazines. Board member James Craig pointed to undercover LMPD officers who only have two magazines when not in full uniform. He likened the SSO's to undercover officers.

"Through all of this, we've been looking at other major districts, school districts, around the country that have their own police force which is most school districts, including Fayette county. So we'll look for some guidance on that, some reasoning behind it, and we'll make the best recommendation to our board.," JCPS Superintendent Dr. Marty Pollio said Tuesday night.

JCPS's task force leader for the school safety plan said the purpose of having three magazines is to prepare officers for the worst case scenario.

The board's policy committee will discuss the finalized plan one last time at its Feb. 18th meeting. Depending on how that goes, Dr. Pollio said the plan should then be vote don by the full board in March.

In the meantime, Kentucky lawmakers are also one step away from a law requiring schools to arm school resource officers.

SB8, introduced by Republican Sen. Max Wise from Campbellsville, amends the original school safety bill passed in 2019. Wise has said the purpose of SB8 is to ensure no school district chooses not to arm their school resource officers, specifically pointing at the Jefferson County Board of Education.

The bill passed on a split vote out of the state house education committee Tuesday.

"I'm really worried about a child in the school reaching for a pencil and an SRO shooting them by mistake and I think it's only a matter of time before that happens," Rep. Mary Lou Marzian, (D- district 34,) said at the hearing.

"If the worse case scenario were to happen, would you not want that police officer to have a firearm if something tragic were to happen," Sen. Wise said.

The bill now moves to the House for a full floor vote.