Stone was presented the Golden Apple ExCel in the school where he was once a student. 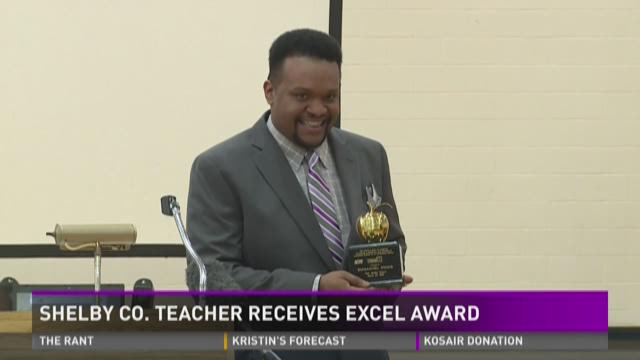 SHELBY CO., Ky. (WHAS11) -- Social studies teacher "Mannie" Stone of West Middle School in Shelby County is the ExCel Award winner for 2016 and also the district's Teacher of the Year.

Stone was presented the Golden Apple ExCel in the school where he was once a student. His teacher and mentor at West Middle is Lillie Hall, who also won the ExCel Award in 2001.

Stone said he can remember the day that Ms. Hall received her ExCel and on Wednesday they were able to stand side by side, each holding an ExCel.

During summer breaks from college, Stone would work for the Shelby County School district, and Ms. Hall would drop by his home at 7:30 a.m. and give him a ride to work.

Stone's nomination for the ExCel Award said he is a teacher, who gets to know each student on a personal level and demands academic growth.

Teachers and administrators, who visit his classroom, say they are amazed by his connection with students.

Among other duties, Stone is "The Warrior" who dresses in costume for school pep rallies. He's also part of the site based decision making council, serves as an academic coach and coaches girls soccer.

The new ExCel teacher says his success was part of a community effort. His parents were in constant contact with teachers to monitor his academic progress.
His engaging personality also makes him a popular person among students. He really is a kind of "hometown hero" in Shelby County.

There are two more ExCel Awards to be presented during this spring. Teachers of the year will be honored in Oldham and Greater Clark County.