Academy at Shawnee is the only high school in the Louisville area that offers an aviation program, and gives students a hands-on experience in the cockpit. 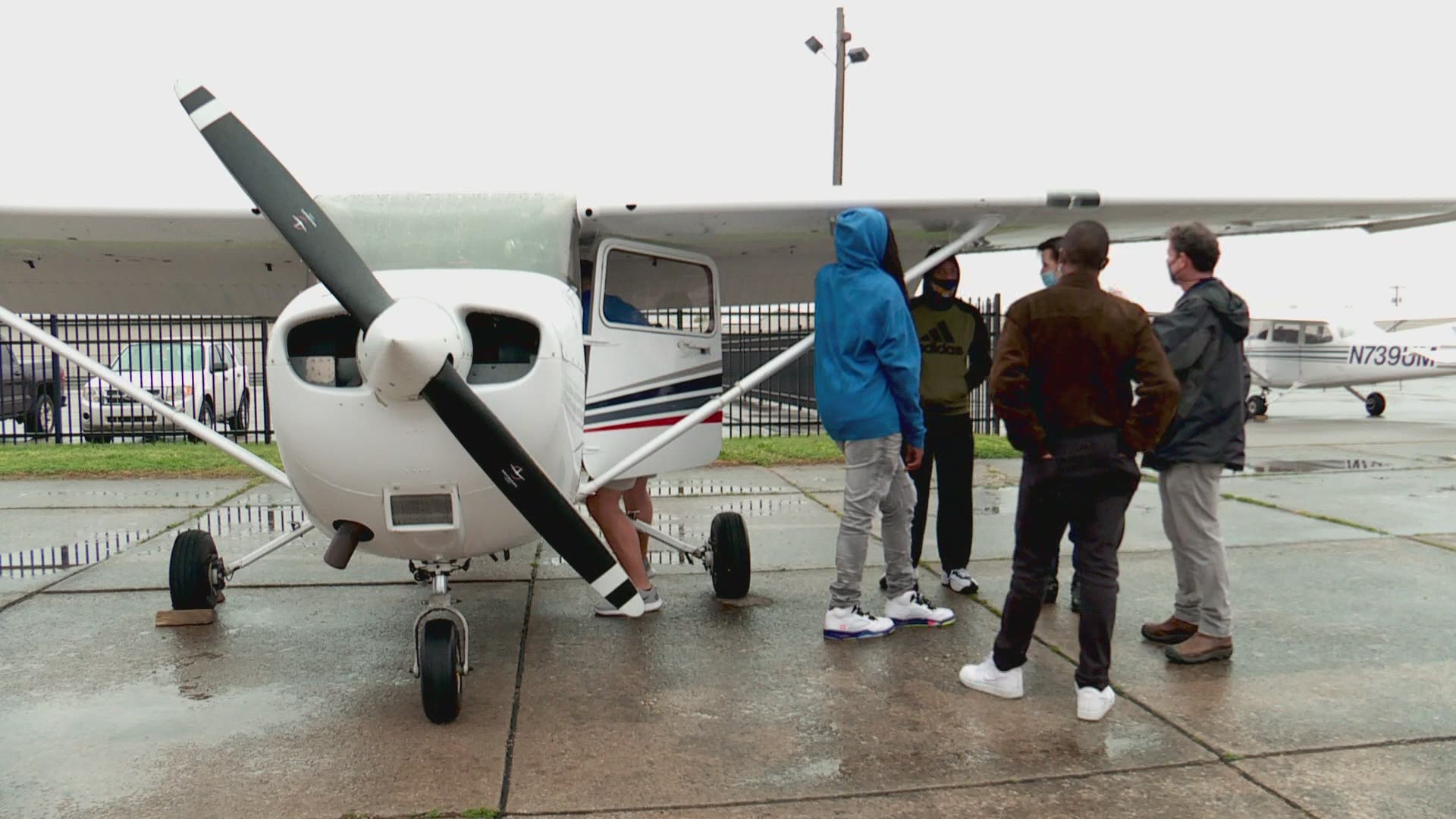 LOUISVILLE, Ky. — Otun Abdullhi stands in a large hangar filled with small jets, keeping an eye to the sky while talking with his friends, Avery Cox and Antwan Seagraves.

The boys, all students at The Academy at Shawnee, are looking for the a small white plane with dark blue stripes on the side to return so they can have a turn.

"I was scared of heights when I started. My first flight was so horrible. I was so scared," he said. "Mr. Jones said if you try it once, you eventually get used to it, so I had to try, right?"

Mr. Jones is Dixon Jones, the chief flight instructor at The Academy at Shawnee and the leader of the school's aviation program.

It is the only high school in the Louisville area that offers an aviation program that not only teaches its students about the science and mechanics of flight but also gives them hands-on experience in the cockpit flying alongside licensed instructors, with the costs all covered by the district.

"Whether they want to be an airline pilot or possibly fly in the military, even if they don't go that route, it gives them a lot of good hands-on skills and a level of achievement that shows if they dedicate themselves to an effort, there isn't much they can't achieve," Dixon said.

The last several months have been especially tough with students at home with virtual learning after the coronavirus pandemic closed off school buildings and restricted gatherings, but when it comes to flying, there's no replacing the actual experience.

"When you're in control, it just feels great up there in the air," Robert Harper, an aviation student, said. "It feels like you're on top of the world. Literally."

"For them to have the payoff, it's just incredible to watch this excitement, enthusiasm," Dixon said. "I mean you see it - their grins pasted on their faces."

"You can always do the flight sims and you can learn the knowledge, but until you fly in the plane, it's just one of the best things ever," Luke Lush, another student, said.

Lush, who hopes to one day fly in the Air Force, said the aviation program was one of the main reasons why he decided to attend The Academy at Shawnee.

"I've wanted to fly since I was 5. And in middle school, I was told by a counselor about the Shawnee Aviation program," he said. "So I looked into it and did my research and now I'm here."

But not every student had the same early childhood dream of learning to fly. Avery Cox said Dixon was the one who approached him about the aviation program, and while he decided to join, he is still nervous about taking control in the cockpit.

Antwan Seagraves shares the same nerves, but he can already see a future in aviation, despite not having too much experience.

"I've never flown before," he said. "Or been in an airplane."

For Harper, who can check off flying a plane before driving a car, he said he and his fellow students feel a sense of pride knowing all that they've accomplished before many of them have even received their driver's license.

"I can flex that. I feel like I can brag about that to my friends," he said. "That's a big brag right there."

Dixon said the program's curriculum meets FAA training standards and the students will have the opportunity to receive a private pilot's certificate through the aviation program.