'Without you guys, his story would've never been heard': Loved ones, community gather for vigil to remember Ahmaud Arbery

The 25-year-old was gunned down in February. Now, a day after what would have been his 26th birthday, loved ones are honoring his memory. 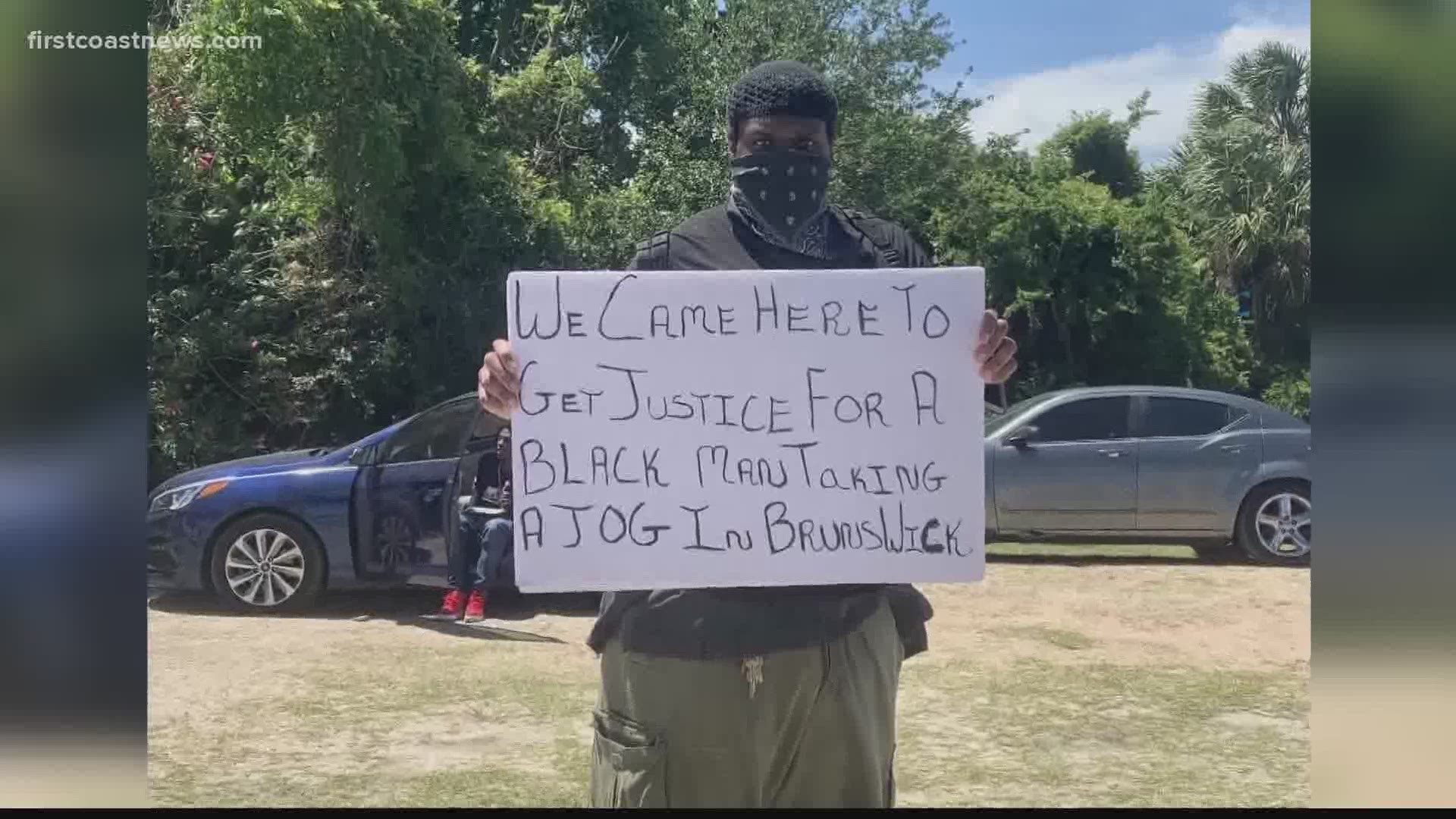 GLYNN COUNTY, Ga. — Ahmaud Arbery would have turned 26 Friday, but he was shot and killed in February. Now two men are behind bars facing murder charges in his death.

Arbery's family, friends and community members gathered for a vigil to celebrate his life Saturday afternoon at Sidney Lanier Park in Brunswick. Family and friends spoke about Arbery in front of hundreds gathered at the park.

"Thank you all for your love because without you guys, his story would've never been heard," Arbery's sister told the crowd.

"We came here for a celebration and to wish Ahmaud a happy, happy birthday," she said.

The vigil Saturday follows a gathering Friday at the Glynn County Courthouse, where hundreds of people rallied to call for justice in Arbery's death. They packed in outside as Gregory McMichael and Travis McMichael's first appearance before a judge was ongoing inside via video conference from the Glynn County jail.

Both of the McMichaels are charged with murder and aggravated assault in Arbery's death. A video released to the public Tuesday shows the circumstances surrounding the shooting.

Protesters were calling for the justice system to do its job in the investigation, which many say has taken too long to result in the arrests of both McMichael men, weeks after Arbery died.

Those who came to the celebration Saturday wore shirts with Arbery's name, held signs and chanted "We run with Muad." Hundreds of motorcyclists rode together to the park as well to honor Arbery.

"I want to send out a sincere thank you. Thank you," Wanda Cooper Jones, Arbery's mother, said to the community.

Arbery's family and friends said they've been overwhelmed by the outpouring of love and support for them from all over the world.

"It's a lot of love and you didn't know there was this much love in America supporting one family who lost a child," Arbery's aunt, Diane Jackson, said.

"To see everybody supporting him and his movement, it warms my heart because this is what he was about, love and supporting people," Shenice Johnson, a close friend of Arbery's, said.

"I know Ahmaud is very happy, oh my gosh I know he's very happy [about the crowd that is supporting them]. That’s what he was all about, family friends and supporting and love, so being that we’re able to show that for him I know he’s at peace," Johnson said.

At peace, and still impacting lives, his family and friends said.

"This is his legacy living on," Arbery's close friend Jariel Coleman said.

"Sometimes people say that whether living or in death you can make your mark, and this is what he did. He made his mark," Coleman said.

Two months went by with no arrests when the case was in the hands of Brunswick DA Jackie Johnson and the Glynn County Police Department.

“Within 36 hours we secured two warrants for arrest of felony murder, I think it speaks volumes that probable cause was clear and our agents moved quickly,” Vic Reynolds, Director of the Georgia Bureau of Investigation said.

Since Wednesday, Reynolds says his office has been gathering files, interviews and other details surrounding the case.

The disturbing video of the shooting a key piece of evidence in the case, Reynolds said.

Travis McMichael and his father Greg McMichael are facing charges of murder and aggravated assault in the case.

Arbery's mother said when she found out about the arrests, she was shocked.

"I was in a numb state because I had waited for two months. Two months and two weeks, and once I received that news it put me in a state where I just couldn’t believe it because that’s the moment I had been waiting on," she said.

An arrest warrant that First Coast News obtained Friday confirms some of the facts.

The warrant states that Travis McMichael shot and killed Ahmaud Arbery, and it says that Greg McMichael, Travis’ father aided and abetted his son in the commission of this crime.

RELATED: 'They were performing a lynching in the middle of the day': Family of slain Brunswick jogger calls for justice after video leaked