'It's no kids game': Law enforcement cracks down on laser pointing 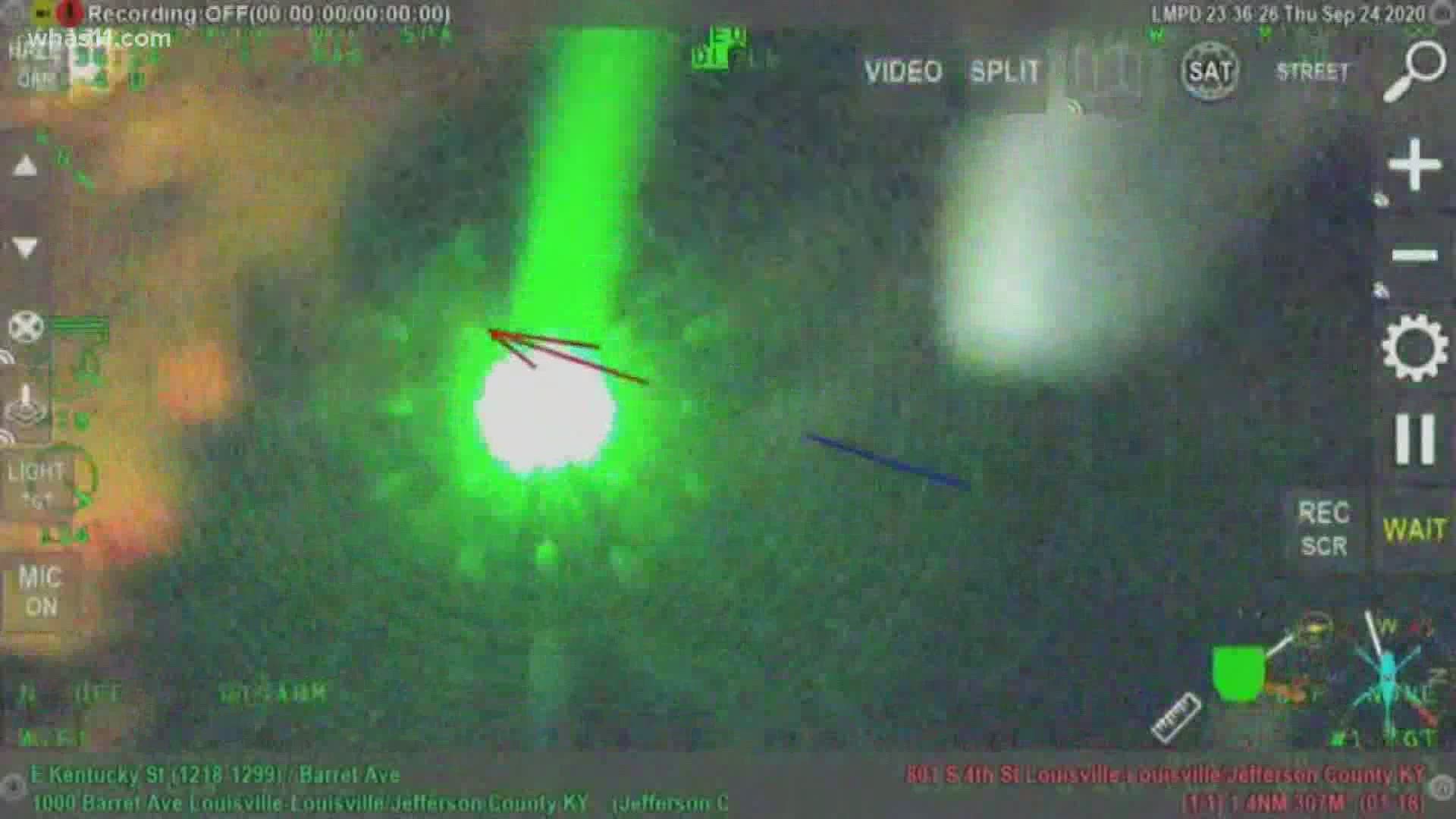 LOUISVILLE, Ky. — While TSA lines might not show it, Louisville Muhammad Ali International Airport is one of the busiest airports in the country thanks to UPS Worldport.

The third busiest cargo airport in North America, SDF remained occupied as other airports struggled during the pandemic. It's importance is why local law enforcement has major concerns about lasers pointing at aircrafts — especially after police were pointed at in 2020.

LMPD, Kentucky State Police and more monitored the city from the ground and the sky — flying around the clock to keep an eye on ongoing protests. Two days after Cameron's announcement, the LMPD helicopter clocked more flight hours.

"You know a lot of those days ran together because they were long days and nights," said officer Bryan Arnold, LMPD helicopter pilot. "I do remember that night was busy."

With his co-pilot controlling the chopper, Arnold looked through the lens of the onboard camera to track and help officers below trap a car full of burglary suspects on Ratcliff Avenue.

Arnold was also able to pinpoint a federal crime in process.

"As we were flying through the Highlands we started into a turn, and as we did there was a flash of light," Arnold said.

A green beam was consistently lighting up the cockpit.

"I said, 'I think we're getting lasered, don't look,'" Arnold said. "It was just nonstop at that point, the subject just kept shining the laser up at us."

The light was worse than irritating, it was blinding.

Blinding a pilot in charge of controlling an aircraft heavy with fuel, flying over a crowded neighborhood, is a recipe for disaster.

"We're talking about a major catastrophe," Arnold said. "What could happen if we lost control of the aircraft, and how many people that could hurt on the ground."

That's why pointing a laser at an aircraft is a federal offense.

While fewer passengers may have been aboard aircrafts during 2020, the FAA said laser strikes on aircrafts are back on the rise. The agency reported 6,852 laser strikes in 2020 — the highest nationwide total since 2016.

Kentucky had 181 laser strikes in 2020, with 73 of them reported in Louisville. By April of this year, the country had already reported more than 2,000 strikes, 19 of which in Louisville.

"Don't do it, because we're going to find you and prosecute you under federal law," said supervisory special agent David Sesma with FBI Louisville.

That is exactly what happened to the man sentenced to one year for pointing a laser at the LMPD helicopter last year.

"I could see exactly where the laser incident was happening and I touched right on that," Arnold said. "At one point when I switched it to the infrared mode, you could actually see the subject hanging out of the window."

Arnold was able to pinpoint an exact address, and the FBI came knocking on the door within 20 minutes.

"Initially, he denied being responsible for lasing the aircraft, but upon further questioning he admitted to being the one who did it, and showed us the window and led us to where he had put the laser device," Sesma said.

Sesma said they were able to show pictures from the aircraft to Manuel Salazar-Leija Jr. during interrogation, bringing him to admit the truth. Facing up to five years in prison and a $250,000 fine, Salazar-Leija was sentenced to two years of probation, including eight months of home incarceration.

"He's a felon now, I mean he's a young guy and he's a felon, this is going to be with him for the rest of his life," Sesma said.

Some states have added their own laws against laser pointing. While Kentucky did not list anything, it is a Class B misdemeanor to point a laser at a public safety officer in Indiana.

"I would think about the repercussions before you [do] it, it's no kids game," Arnold said.

Several attempts to reach Salazar-Leija for comment were unsuccessful.