Kroger to reopen the 28th and Broadway store, neighbors come out to clean after damage and theft

Kroger plans to reopen the store Wednesday with limited hours of operation. 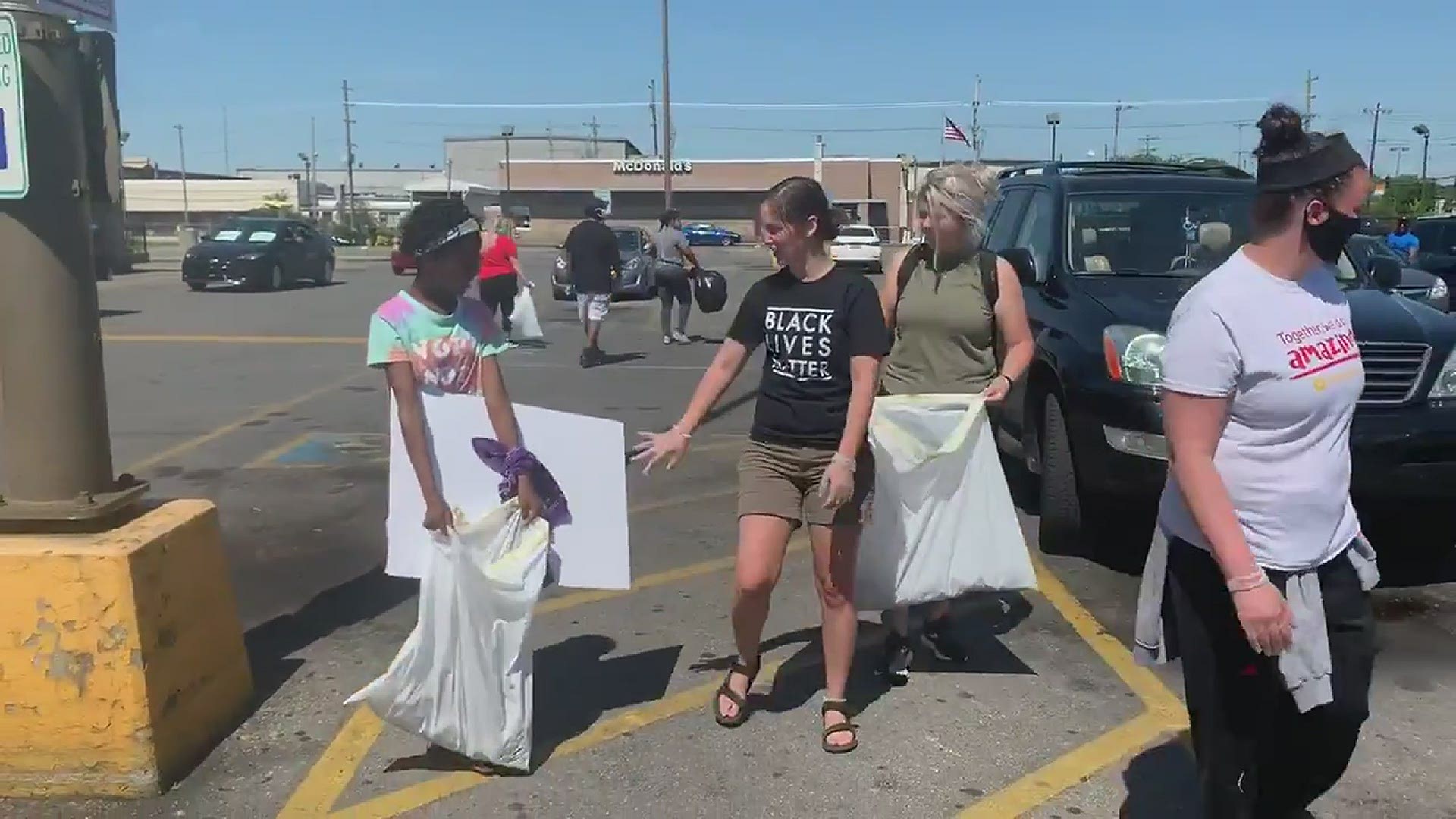 LOUISVILLE, Ky. — A Kroger in West Louisville was badly damaged after several people broke into the store and looted it early Tuesday morning.

The store near 28th and Broadway was shut down and boarded up Monday out of an abundance of caution. A sign was posted on the door saying the store was closed until further notice.

It’s not the place Milissa Greene-Jones pictured herself at 4 a.m. on a Tuesday.

She was home as dozens of looters made their way into her neighborhood Kroger, near 28th and Broadway, ransacking every aisle. It began before 1 a.m., but a security guard on scene said police didn't arrive until 45 minutes after a 911 call was made.

"I saw people running out, taking meds, diapers, meat, juice, whatever they could get their hands on," Greene-Jones said.

Her emotions ran high as the scene played out live on a Facebook feed.

She drove to the store as soon as the crowd had gone, ready to pick up the pieces, including a handful of prescription medications still laying in bags on the ground.

“People's names out everywhere. There are so many violations with that. It's not okay," she said. "I shouldn't be out here cleaning up after something they did, that our people did, my people. People are tired and they're angry of being mistreated because of our skin color. They want to know, what do we do, for you all to act this way towards us?"

She'd been a part of the protests for 2 days last week, which she said remained peaceful. Greene-Jones draws the line with looting and destruction.

"Tearing up the community Kroger where families go to, there's already a lot of people struggling and now you're making us struggle more," she said. "I want our voices to be heard. I want them to understand our hurt and where it comes from, but we have to come together and find another way."

Update: Tuesday, Kroger said in a statement to WHAS11, the store will open with limited operations on Wednesday.

Overnight, a group of people tore the boards off the doors of the store and broke in, according to employees and a security guard. Facebook Live video shows people running out of the store with grocery carts full of stolen grocery items. (Warning: Video contains profanity)

Kroger released this statement about the store and the damage:

"At Kroger our Purpose is to Feed the Human Spirit, and we do that by taking care of the communities we serve. As America’s Grocer, we strive to demonstrate Our Values of Respect, Diversity, Inclusion, Honestly, Integrity and Safety in our everyday actions.

Out of an abundance of caution for our customers and associates, we chose to close our store at 28th and Broadway early yesterday, June 1st. We are saddened by the events of last night, but are thankful that none of our associates or customers were injured during the incident.

We love our customers in the Russel Neighborhood, and know they will continue to support our store team through this incident. We have already seen many neighbors come out this morning to assist with cleanup efforts that will aide us to reopen as quickly as possible.

Our collective energy is necessary to achieve true equality and inclusion for our country. We will do our part to bring our community together, as an employer, grocery provider and community partner. We hope that the protests unfolding in Louisville and across the nation will peacefully shine a light on injustice.

We have plans to reopen this location tomorrow with limited hours of operation to serve our neighbors."

According to an employee at the store and the Facebook video, prescription medications were stolen from the pharmacy and some were left in the parking lot. A Chase ATM machine outside the Kroger store was destroyed and looted as well.

A security guard at the Kroger said it took police around 45 minutes to respond after he reported the break-in. Louisville Metro Police have not released a statement on this incident.

It is unclear how many items were stolen from the store or how many people were involved. Witnesses said they heard several gunshots, but no injuries have been reported at this time.

The Kroger on 26th and Broadway is the only grocery store for many West Louisville residents like Milissa Greene-Jones. She came to the store early Tuesday morning to help with a clean-up effort after watching the looting on Facebook.

Early Monday morning, business owner David McAtee was shot and killed during an incident between a crowd, LMPD and the National Guard in the parking lot of Dino's Food Mart, which is across the street from the Kroger that was looted.

Just before 11 p.m. Monday night, the food mart caught on fire. The cause of that fire is still under investigation.