“We are committed to a complete and transparent review of how the Ahmaud Arbery case was handled from the outset." -- Georgia's Attorney General Chris Carr 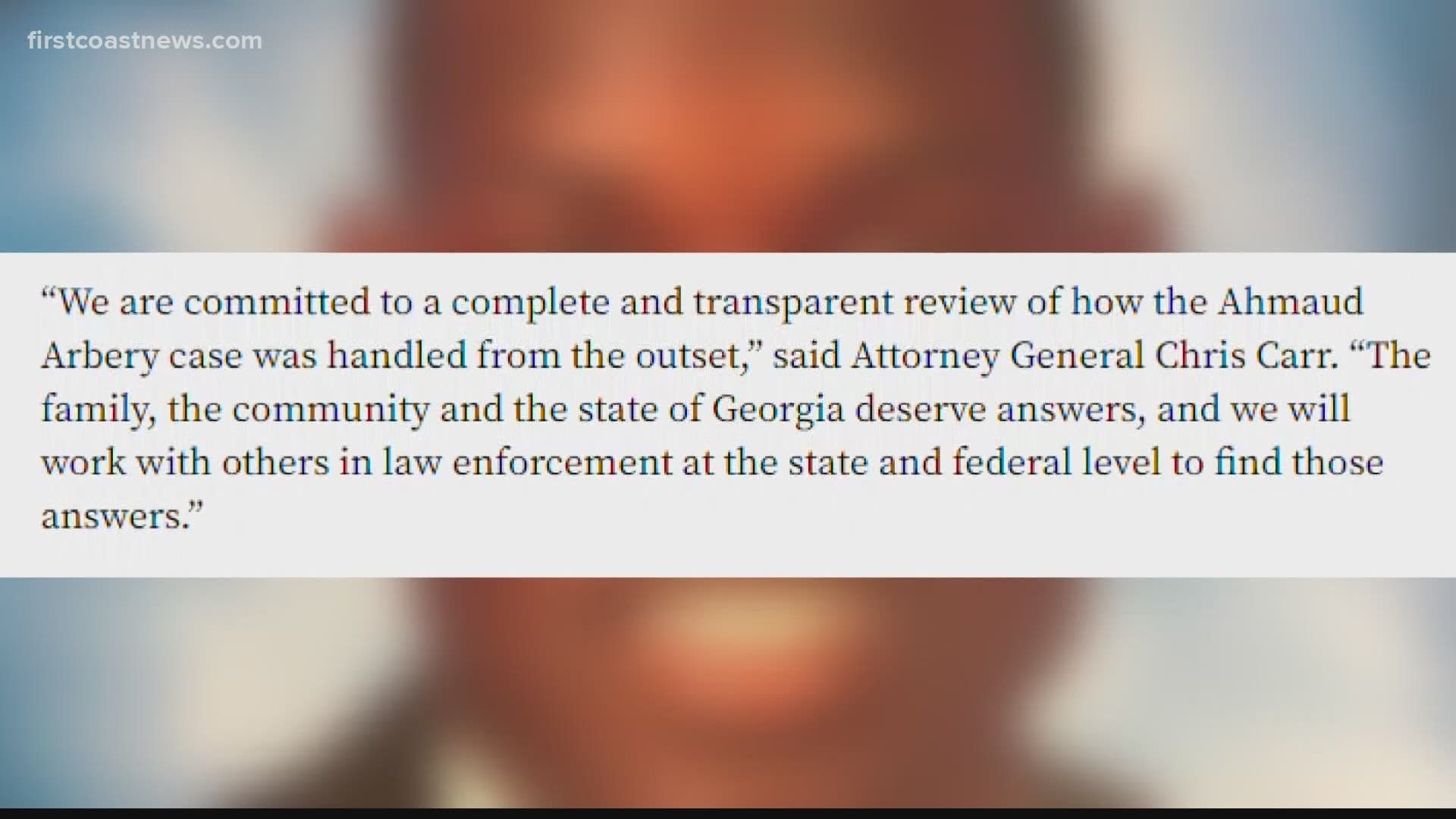 BRUNSWICK, Ga. — Georgia's Attorney General Chris Carr requested Sunday that the U.S. Department of Justice conducts an investigation into the handling of the Ahmaud Arbery case.

The 25-year-old was killed in the Satilla Shores neighborhood of Brunswick, Ga., on Feb. 23. No arrests were made in the case until May 7. Travis McMichael and his father Greg McMichael were both arrested on suspicion of murder and aggravated assault.

“We are committed to a complete and transparent review of how the Ahmaud Arbery case was handled from the outset,” Carr said. “The family, the community and the state of Georgia deserve answers, and we will work with others in law enforcement at the state and federal level to find those answers.”

The following represents contents of the Attorney General’s full request:

"The Attorney General is concerned that the actions of these offices in possibly misrepresenting or failing to disclose information during the process of appointing a conflict prosecutor to investigate the death of Ahmaud Arbery may have constituted unprofessional conduct under O.C.G.A. § 45-11-4 or other crimes.

In this case, Mr. Arbery was shot and killed in Glynn County, in the Brunswick Judicial Circuit, on February 23, 2020.  Four days later, on February 27, 2020, the Attorney General’s Office received a letter from Jackie Johnson, the District Attorney of the Brunswick Judicial Circuit, advising that she had a conflict and that she was requesting the appointment of another prosecutor.  Ms. Johnson wrote that the reason for the conflict was because the investigation into Mr. Arbery’s death involved Greg McMichael, a former investigator with her office.  Shortly after receipt of Ms. Johnson’s letter, this office was made aware that Ms. Johnson had contacted George Barnhill, District Attorney of the Waycross Judicial Circuit, and that he had agreed to accept the case.  This office confirmed with Mr. Barnhill and, pursuant to O.C.G.A. § 15-18-5, this office appointed Mr. Barnhill to prosecute the case on the same date Ms. Johnson’s letter was received.

Mr. Barnhill’s letter failed to disclose his involvement in this case prior to his appointment.  In her conflict letter of February 27, 2020, Ms. Johnson had advised that the Glynn County Police Department was “currently investigating” the shooting death of Mr. Arbery, and that she was requesting new counsel to advise the police. Unknown and undisclosed to the Attorney General, however, Mr. Barnhill had already provided an opinion to the Glynn County Police Department on February 24, 2020, that he did not see grounds for the arrest of any of the individuals involved in Mr. Arbery’s death.   He additionally stated his opinion to the Glynn County Police Department in writing that there was insufficient probable cause to make any arrests in the case and that he would be asking the Attorney General to appoint another prosecutor.

After receipt of Mr. Barnhill’s conflict letter, the Attorney General then appointed District Attorney Tom Durden of the Atlantic Judicial Circuit to this case on April 13, 2020.  On May 5, 2020, Mr. Durden requested that your agency conduct an investigation into Mr. Arbery’s death.  Two days later your agency arrested Mr. McMichael and his son for aggravated assault and felony murder for Mr. Arbery’s death."

The investigation includes looking into communication by and between the Brunswick and Waycross district attorneys.

"We are pleased that Georgia AG Chris Carr has officially asked the Dept. of Justice to investigate the handling, and potential cover-up, of Ahmaud Arbery's murder. We have requested the involvement of the DOJ since we first took this case. There are far too many questions about how this case was handled and why it took 74 days for two of the killers to be arrested and charged in Mr. Arbery's death. It is our hope that the DOJ will conduct a comprehensive investigation to determine how and why this case was so poorly handled. Those who were responsible for this travesty of justice must be held accountable. We will continue to tirelessly pursue every avenue of justice for Ahmaud Arbery's family."

"We [Browning and other commissioners] had a hunch things weren't adding up. Because of the case and the severity, the tragic death we had, we knew this needed to go to court," Browning said.

"We believe in transparency and we don't think all of the facts were put out at this point," Browning said.

The case sparked national attention after video showed Travis McMichael and his father Greg McMichael intercepting Arbery in a pickup truck as he ran down a suburban street. An altercation ensued, and Travis McMichael fired his shotgun three times. Arbery died shortly after of gunshot wounds. Arbery was unarmed, according to police reports.

Greg McMichael said burglaries had been happening in the neighborhood and when he saw Arbery jogging down a residential road on Feb. 23, he believed he was the culprit.

A second video obtained by First Coast News shows someone whom a prosecutor identifies as Ahmaud Arbery, entering a home under construction, walking around and leaving shortly before he was shot and killed.

Attorneys for Arbery's family said the video clearly shows Arbery did not engage in any illegal activity.

"Ahmaud did not take anything from the construction site. He did not cause any damage to the property and was not instructed by anyone to leave, but rather left of his own accord to continue on his jog," their statement said.

Larry English, the man who owns the house under construction, said in an interview with The Washington Post that the house was not robbed.

“That’s completely wrong. I’ve never had a police report or anything stolen from my property, or any kind of robbery,” he said.

Attorneys for Arbery's family said Arbery's actions were in no way a felony under Georgia law and confirms his "murder was not justified."

RELATED: 'Without you guys, his story would've never been heard': Loved ones, community gather for vigil to remember Ahmaud Arbery