"Doing something nice for someone can make you feel really good, too," said members of the Kids Wonderland crew. 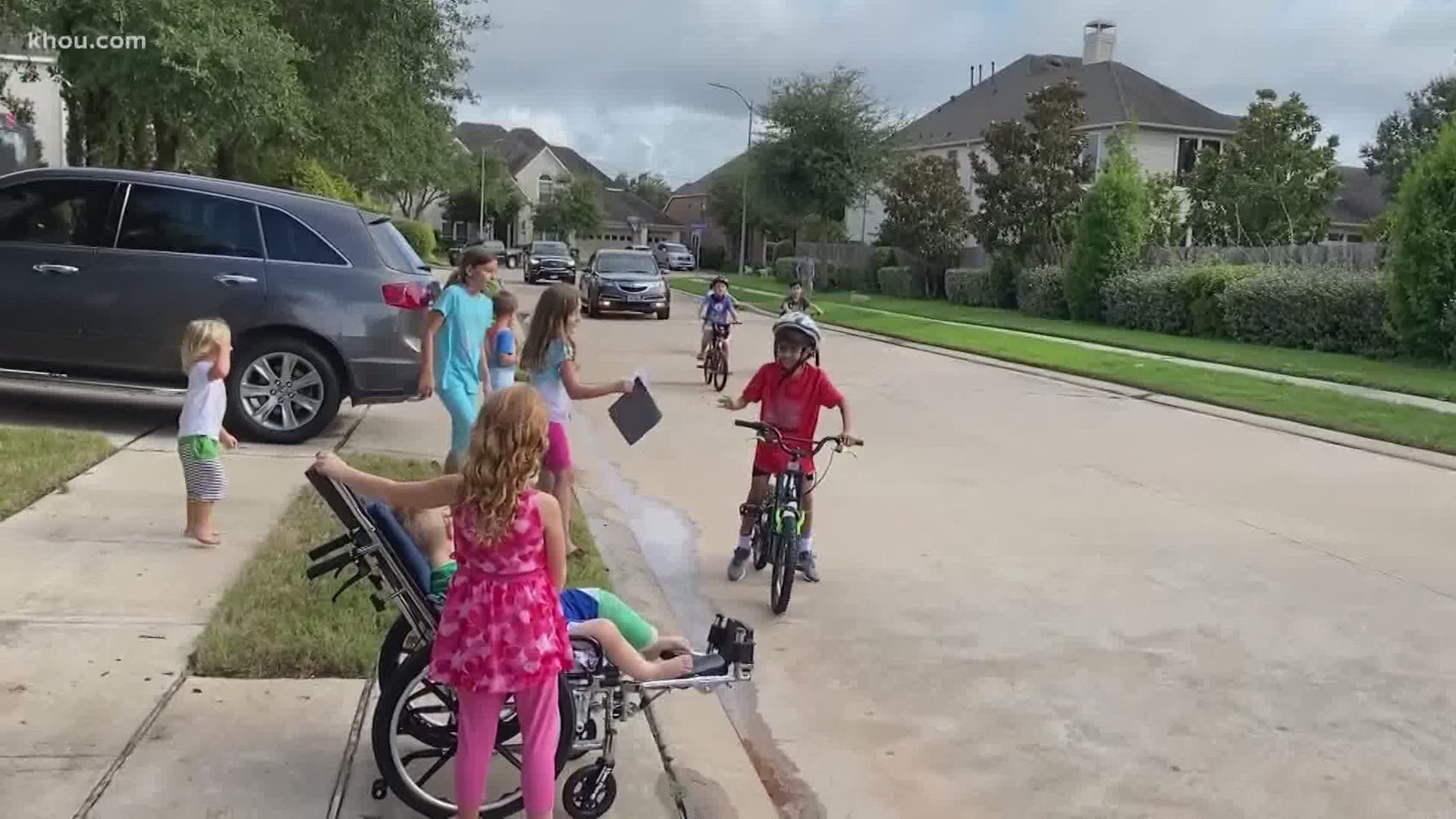 SUGAR LAND, Texas — We are spotlighting and celebrating "heroes Nextdoor," like these kiddos who just showed up -- big time -- for their little buddy in Sugar Land. The children are proof random acts of kindness can happen at any age.

Parents Tina and Justin Folloder have their hands full.

Garrett’s learned to adjust since falling off his scooter. Neighbors noticed, too.

“We saw one of our neighbors going around with his family,” Beyli said. “He had a cast from his hip to his toe. We felt really bad for him and wanted to bring a smile to his face.”

Beyli, Emma and Inara are part of the “Kids Wonderland.” It’s a crew in Sugar Land’s TelFair neighborhood.

“We organized a car parade to make him feel better,” Emma said.

The surprise parade happened to fall on Garrett’s 3rd birthday. The neighborhood children took the time to learn that Garrett’s favorite color is green. They collected donations to buy gifts and wrapped them in special drawings. The Kids Wonderland Crew created flyers to invite the whole neighborhood. Security cameras captured the crowd that included several vehicles and kids on bikes.

“Oh! It was amazing. I had tears in my eyes the whole time,” Tina Folloder said. “You know, that they would go out of their way to acknowledge our baby boy and give him some smiles and some happiness. It was great.”

It's my job to spotlight the good⬇️

So, they collected donations for gifts, invited neighbors to a parade which fell on Garrett's 3rd birthday!

His parents are gushing with gratitude.💚#HeroesNextdoor on #khou11 at 6. pic.twitter.com/t7GOKrh8KL

“It was really cool! People were in their cars,” said sister Alex Folloder.

“It was kind of like a ray of sunshine in the middle of a storm,” Justin Folloder said. “And it was a great lesson for our kids. To see that random acts of kindness are so much appreciated.”

Especially by mom and dad. They’re healthcare workers who are juggling the pandemic with parenthood. The whole family’s gushing with gratitude for the little heroes who live next door.

KHOU 11 Reporter Melissa Correa is using Nextdoor to solicit positive and uplifting stories about how neighbors are helping their neighbors. That's how Tina Folloder submitted this story idea:

"Our 2-year-old recently broke his femur after falling off his scooter. He has been in a spica cast for 5 weeks (1 to go!) and uses a wheelchair. My husband would take him for “walks” around the neighborhood in his wheelchair. A few of the neighborhood kids took notice and organized a car parade to lift Garrett’s spirits. The day of the parade also fell on his 3rd birthday so they went out of their way to find out his favorite color and bought him a green basket full of presents to unwrap. I cried seeing the kindness they showed my baby boy.
Thanks for reporting uplifting stories in this time of unrest and uncertainty.
Tina Folloder"

Click here to connect with Melissa Correa on Nextdoor