Joseph Colwell was born August 7, 1921. He served in the U.S. Marine Corps during World War II. He exercises, drives a Mustang and is loved by so many people. 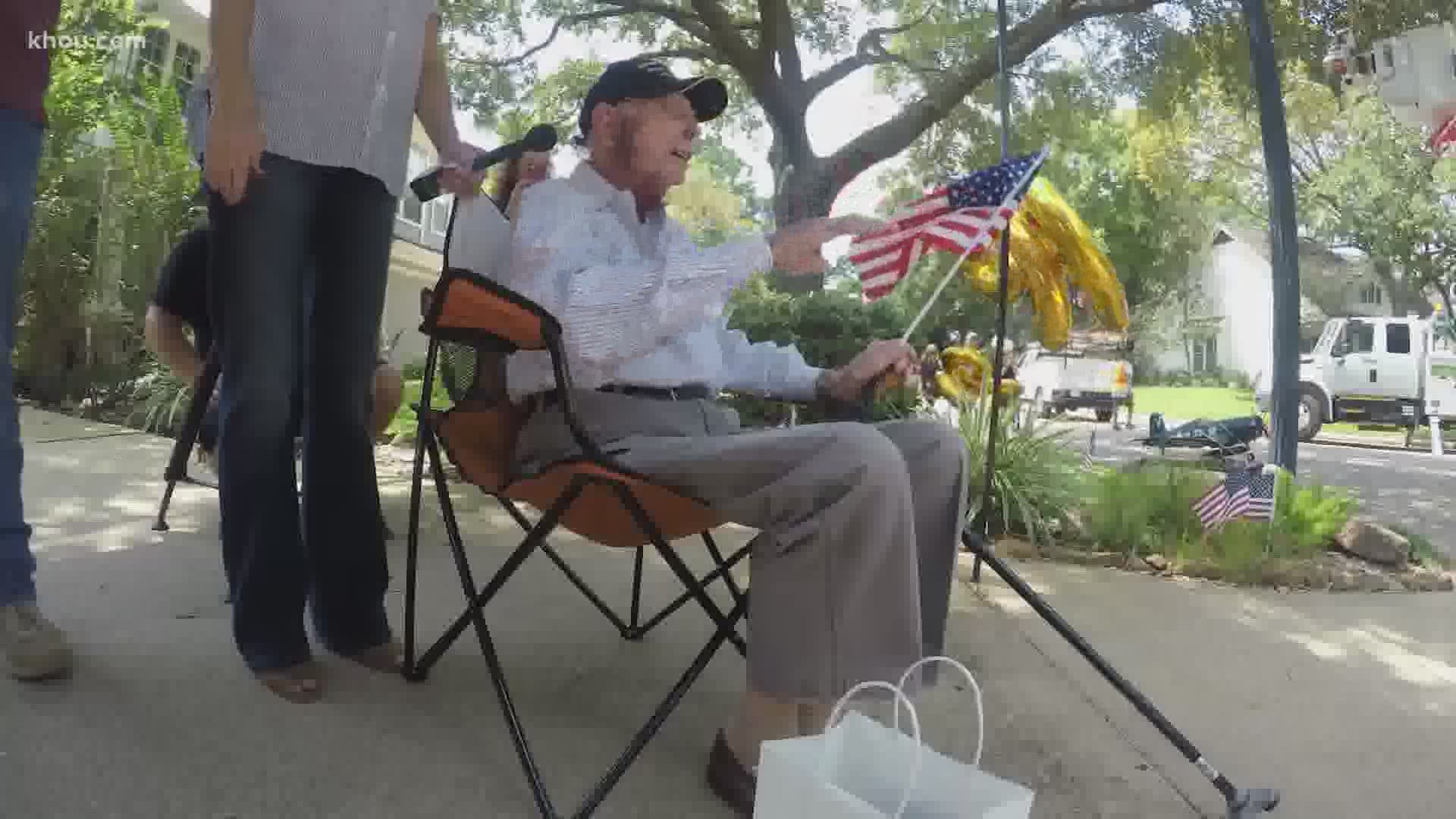 HOUSTON — In a time where we’re calculating risk by counting loss of life, stubborn Joseph Colwell is proof every single caution is worth taking if it can lead to just one more day with those we love.

The two live just a few houses from each other. They became fast friends when Strnadel moved in to their northwest Houston neighborhood five years ago.

“He still pokes around a little bit on Nextdoor, so I had to tell everybody in the neighborhood: absolutely no posting. It has to be word-of-mouth. You cannot post on Nextdoor,” said Strnadel of the surprise birthday parade she and Colwell’s daughter, Nancy Lawrence, began planning in June.

“To see him in action, you wouldn’t believe that he’s 99,” said Lawrence of her father who still drives his Ford Mustang to the gym to exercise regularly. He grocery shops, sits on his front porch and visits with neighbors and flies a U.S. Marine Corps flag on his property.

“He does not talk about his service much,” Lawrence said. “He claims that he’s the oldest living Marine in Texas.”

Colwell’s quietly served his country for most of his life. He enlisted in the U.S. Marine Corps in 1942, fought in the Pacific during World War II and returned home and married Francis. The two loved each other for 62 years before she passed away. The military veteran became a police officer, then a firefighter, then worked and retired from the U.S. Postal Service. The die-hard Astros fan learned to fly in his early 90s.

“You’re going to be surprised how many people are here,” said Lawrence of the neighbors, friends and family who would decorate their vehicles for the parade at noon on Friday.

“When my mom passed away, he was in awe of all the cars that were behind us in the procession. I want him to have this before he passes away. I want him to know how many people love him,” Lawrence said.

The parade lasted about 30 minutes. There were that many cars. Harris County Precinct 4 deputy constables blared their sirens and turned on their lights as they led dozens of well-wishers past Colwell’s home.

The 99-year old sat in a chair, under a tent, in his driveway. He didn’t break a sweat on the hot August day.

From families on bikes to a couple cruising in a 93-year-old classic car, to families packed into decorated vans, Colwell waved to them all.

More than a dozen military veterans motorcyclists revved their engines before stopping to salute the American hero.

“I hope that people look at and smile and think, that’s great,” Lawrence said. “This guy is 99 years old.”

A daredevil who still has so much life in him that the celebration wraps around the block.