Trump's trade war could have a devastating effect on Kentucky and Indiana soybean farmers. 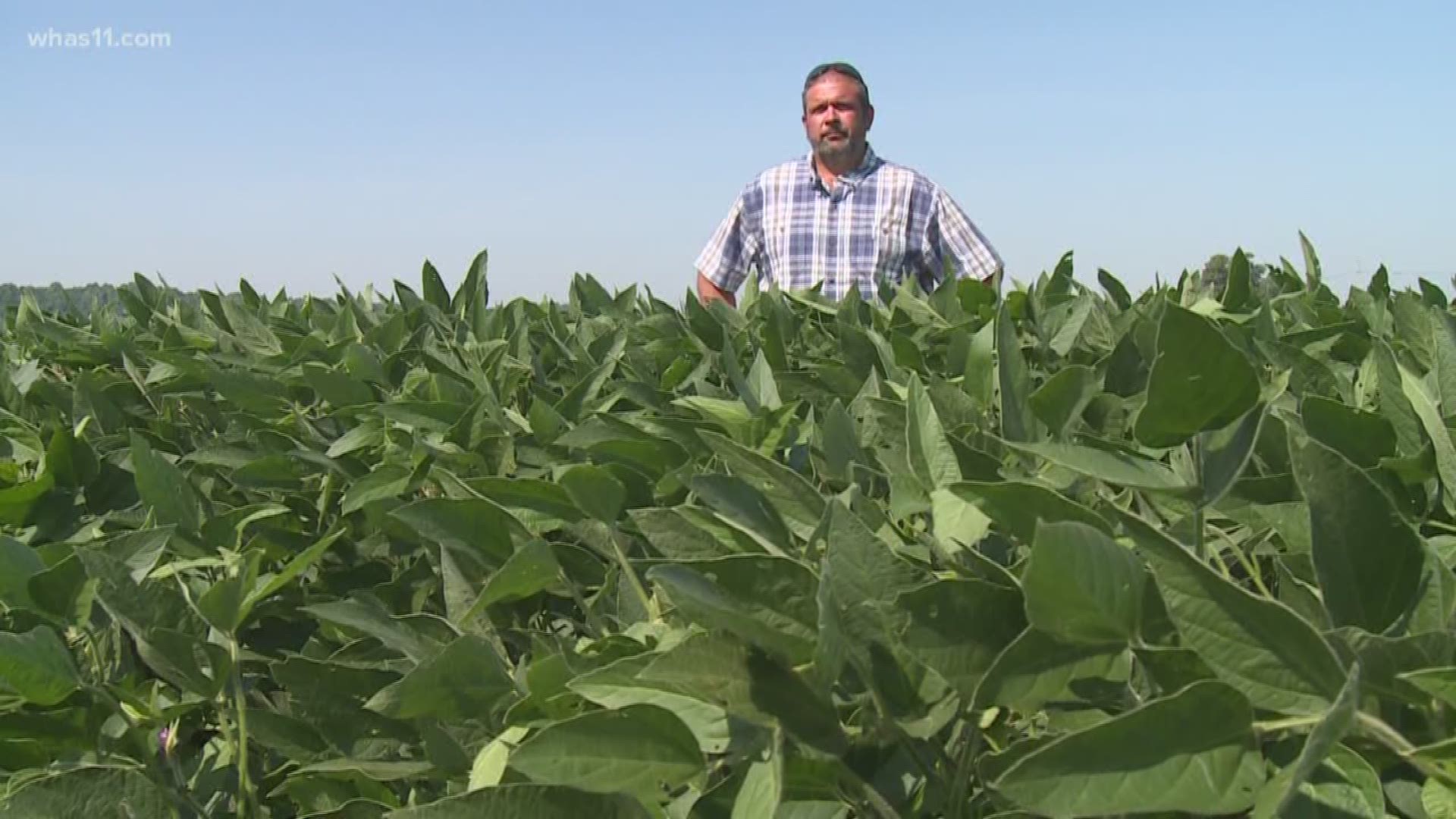 LOUISVILLE, Ky. (WHAS11) – Soybean prices have spiraled since talk of a trade war erupted this spring. Soybean farmers in Indiana and Kentucky could earn hundreds of millions of dollars less this year if prices do not rebound soon.

President Donald Trump’s trade war with China and the European Union saw increased import tariffs on American products. Both governments are the two largest importers of US Soybeans.

The resulting plunge in soybean prices is striking an area of the country that helped President Trump win his election in 2016.

Wading through green up to his waist, Fred Sipes tries to remain optimistic on his farm in Meade County, Kentucky.

But Sipes, who also serves as the Vice President of Kentucky’s Soybean Association, is starting to worry about another color.

He and soybean farmers across America's midsection worry about going into the red, on the wrong side of the financial ledger.

"Right now, everybody's pretty worried, pretty nervous,” Sipes said. A lot of uncertainties out there in our industry.

Since President Donald Trump began talking up a trade war with China and the EU, the beans in this field have gone from being worth $10.54 bushel, to about $8.40 per bushel.

“$8 soybeans, with our high input, costs of seed, chemical, fertilizer and equipment, and land costs, there's not much profit margin in $8,” he said.

Sipes hates talking politics but when I asked whether the trade war was to blame, he answered without hesitation.

“Even a couple of months ago, when the talk of tariffs were just starting to come out, soybean prices started dropping. We haven't had any big weather scares or anything like that around,” Sipes said.

“It's all tariffs right now or the talk of tariffs, yes,” he confirmed.

Soybeans is Kentucky’s biggest export crop and 1/3 of soybeans grown in the Commonwealth will be shipped to China.

With the same yield and comparing prices now to just a couple of months ago, Kentucky farmers are poised to earn $200 million less than they could have.

Indiana could lose more. The Hoosier state is the nation's 5th biggest producer of Soybeans.

If that amount sold for $2 less per bushel, Indiana farmers would see a revenue drop of more than $640 million.

Farm income feeds state tax coffers and businesses on main street so a trade war half a world away will have casualties in hometowns across the heartland.

"It's enormous,” Senator Rand Paul said. “Overall, agriculture is about 25 percent exports, soy bean maybe as much as 30 to 33 percent exports so, yea, it's a real problem.”

“Nobody wins a trade war,” Leader McConnell said. “So, it would be good if it ended soon, and I hope it does."

Senator Paul explained that the President has control of this issue, any attempt at passing legislation to withdraw his authority would face a veto and a plan that is "veto proof" lacks support.

In about two months, farmers will crank up the combines for the start of harvest which means, unless the President acts soon, any relief may be too late.