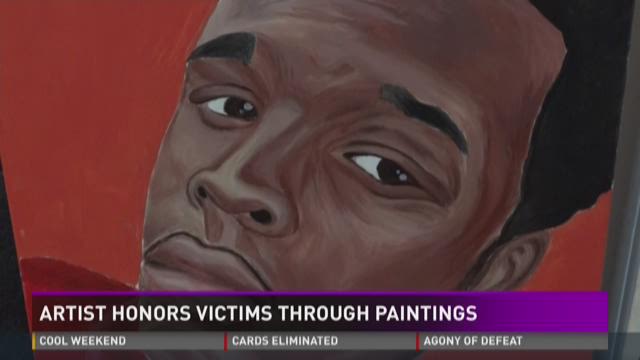 "It's not just a number. It's nothing to be proud of," she said.

As a Louisville artist, she is taking a different approach to the city's violence. From her family room, Stewart paints the faces of the fallen.

"A lot of people don't like dealing with death and loss in the family," she told WHAS11. That loss has not escaped Stewart's family. Her cousin, Demond Ramsey, was shot to death in October 2015. He was her first painting.

"I put a lot of time, effort and love into these paintings. This is a way of me healing as well," Stewart said.

So far, she's completed six paintings, including a portrait of Mariah Wilson. LMPD says she was gunned down at Liberty Green Apartments in September 2016.

"I feel like they are sitting right in front of me because they look so real," she remarked.

Stewart says now is a perfect time to paint, considering at least 100 Louisville families will celebrate the holidays without a loved one.

So, with a stroke of a brush, she hopes it brings those families some closure knowing someone is thinking of them.

"For it to make me this happy, I know these families will be ecstatic to put something like this in their home."

Stewart says she will continue to paint as long as there is a request from families.