The significance behind the Okolona Fire House painting

Darryl Tucker loves to paint, everything from animals to movie scenes. But no one understood why he'd want to paint his neighborhood fire station. 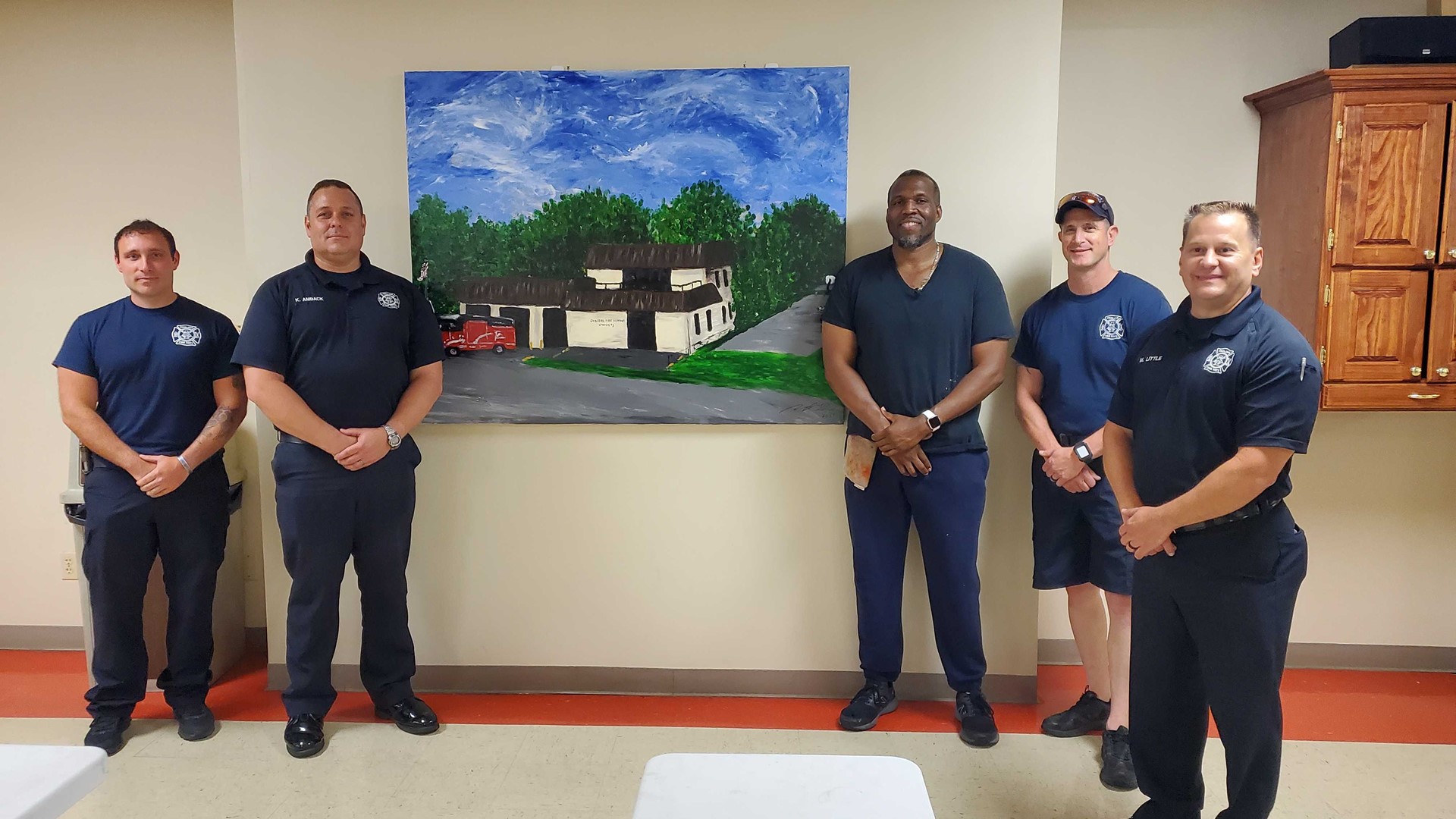 LOUISVILLE, Ky. — If you live in Okolona, you've likely seen Darryl Tucker. When he's not at work, he's out in his front yard off Rangeland Road, creating art.

"This is my studio," Tucker said.

His paintings are eye-catching, created solely by his fingertips. Looking at any of his pieces, you'll be hard-pressed to find a straight line.

"I flow a lot better with my fingers than I do the brush because it's so constrictive," Tucker said.

He stands outside, covered in yellow paint, with his wife and youngest son watching nearby. Even his phone is splattered with his color palette that's as vibrant as the sun beaming off his canvas in the middle of the June heat.

"I paint outside because it's relaxing," he said. "I'm normally by myself. I get a lot of people who drive by, a lot of honks and people stop and come and talk to me, tell me what a good job I'm doing."

Tucker often goes to Facebook Live, asking for advice. One day in mid-May, his stream captured him receiving some unexpected visitors.

Started a finger painting of Sugar Shack on a 4’x5’

"In the corner of my eye I see the red truck pulling up in my yard," Tucker said.

In the video, you can see him start to smile as he says, "Oh, the fire truck's coming. You got people coming to see my painting!"

A group of firefighters who work with the Okolona and Camp Taylor fire districts walk up to Tucker, admiring his take on the 'Sugar Shack' from the show, "Good Times."

It was then Tucker told them about his next idea.

"I was thinking of doing a painting of y'all's house with the fire truck out front," he said, asking if they'd take it once it was complete.

At the time, no one understood why. But this wasn't the first time firefighters had been to Tucker's home.

That had been 17 years ago, when Tucker's youngest son, Dominique, stopped breathing after a bad fall.

"The fire department was the first to come out," Tucker said. "The one firefighter had my son, the other was calming me down because I was scared. I was really scared. I was in tears. He was telling me everything I needed to hear to feel better and I really appreciated that."

Tucker wanted to do something for them ever since. So, he painted Okolona's Fire Station #3 and delivered it right to the firehouse last month.

He walked in days later to find his first painting of its size hanging on the wall.

"Don't judge us for being crooked, alright?" the firefighters laughed.

Credit: Brooke Hasch, WHAS
Darryl Tucker stands alongside members of the Okolona Fire Protection District, with the artwork he gifted them back in May.

The painting is a reminder to the firefighters who live and work here of the run that saved Tucker's family all those years ago.

"Typically when we run into folks, it's the worst day of their lives. For this to come full circle, 17 years later, I can't tell you how appreciative we are to have this hanging in our station," Kenny Amback, Okolona's assistant fire chief said.

"You encouraged me, man. I really wanted to do something for you all. So, I'm glad you all liked it," Tucker said.