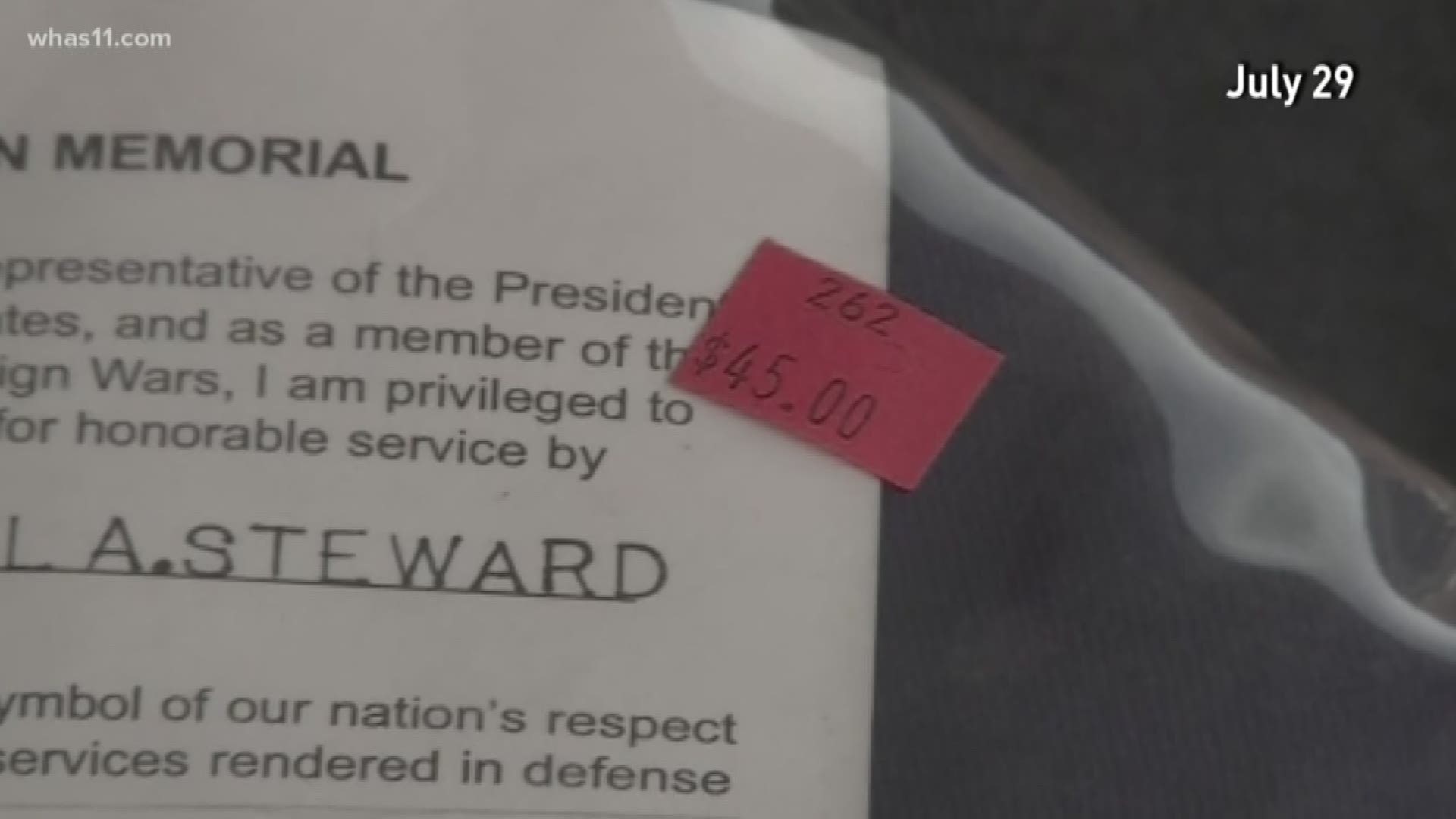 BARDSTOWN, Ky. (WHAS11) -- Her hands gripped the wooden frame of the folded flag tightly, refusing to drop it. Katie Marks was ready for the big day.

"I feel super nervous, but in a good way," she said. "His flag will get a homecoming it definitely deserves."

The flag, at its base a simple folded piece of cloth, belongs to the family of Samuel A. Steward, a soldier who served in the U.S. Army. The funeral flag now sits in a decorative wood frame picked out by Marks, a big contrast from the plastic cover that Marks had first found it in, sitting on a shelf at a Bardstown peddler's mall with an orange sticker slapped on it, reading "$45."

"Uncle Sam's flag definitely deserved to be out of its plastic case and in a proper flag case, which I got at Hobby Lobby," Marks said.

Marks bought the flag back in July and spent several days looking for Steward's family in hopes to returning the flag. She eventually found Steward's nephew, Deric, who lives 150 miles away in Petersburg, Indiana. She said Deric was very close with his uncle and had received the flag at his funeral, but after an issue with his fiancee's pregnancy led to expensive medical bills, the Deric was no longer able to pay for the storage unit where he kept the flag and other personal items, most of which were sold off.

More than three weeks after her find, Marks was ready to make the drive. She had originally planned on driving alone, but after word of her mission got out, the American Legion Riders of Post 157 in Shepherdsville, Kentucky, volunteered to tag along, giving Marks and Steward's flag an escort on the three-hour trip.

"It was a no-brainer. I said yes for the whole bunch and then told everybody we were going to do it," Dale McKinney, a member of the American Legion Riders, said. "It's a veteran's funeral flag. It shouldn't be in a peddler's mall. It should be with the family."

"They don't know me. They certainly don't know Deric and Sam and his family, and they're just willing to drop their routine Sunday to do the right thing as well," she said. "It's a really good reason to put on water-proof mascara this morning."

Three hours later, Marks, her escort of veterans, and Uncle Sam's flag finally made it to Petersburg and Steward's family.

"My eyes, I think she's a godsend," Deric Steward said. "It's a blessing. She's a good woman."

Whether she's a godsend or a messenger can be debated later, but there is one thing everyone can agree on - Uncle Sam's flag is back where it belongs with its family..

Marks has also been raising money through a GoFundMe account for Steward's family to help them with their medical bills. As of Sunday, she has raised more than $2,000 but is hoping to raise even more. People can donate at the GoFundMe page here.