A Rickenbacker bass swiped from a Grand Rapids home more than a decade ago, is returned to owner, thanks to flames and Facebook. 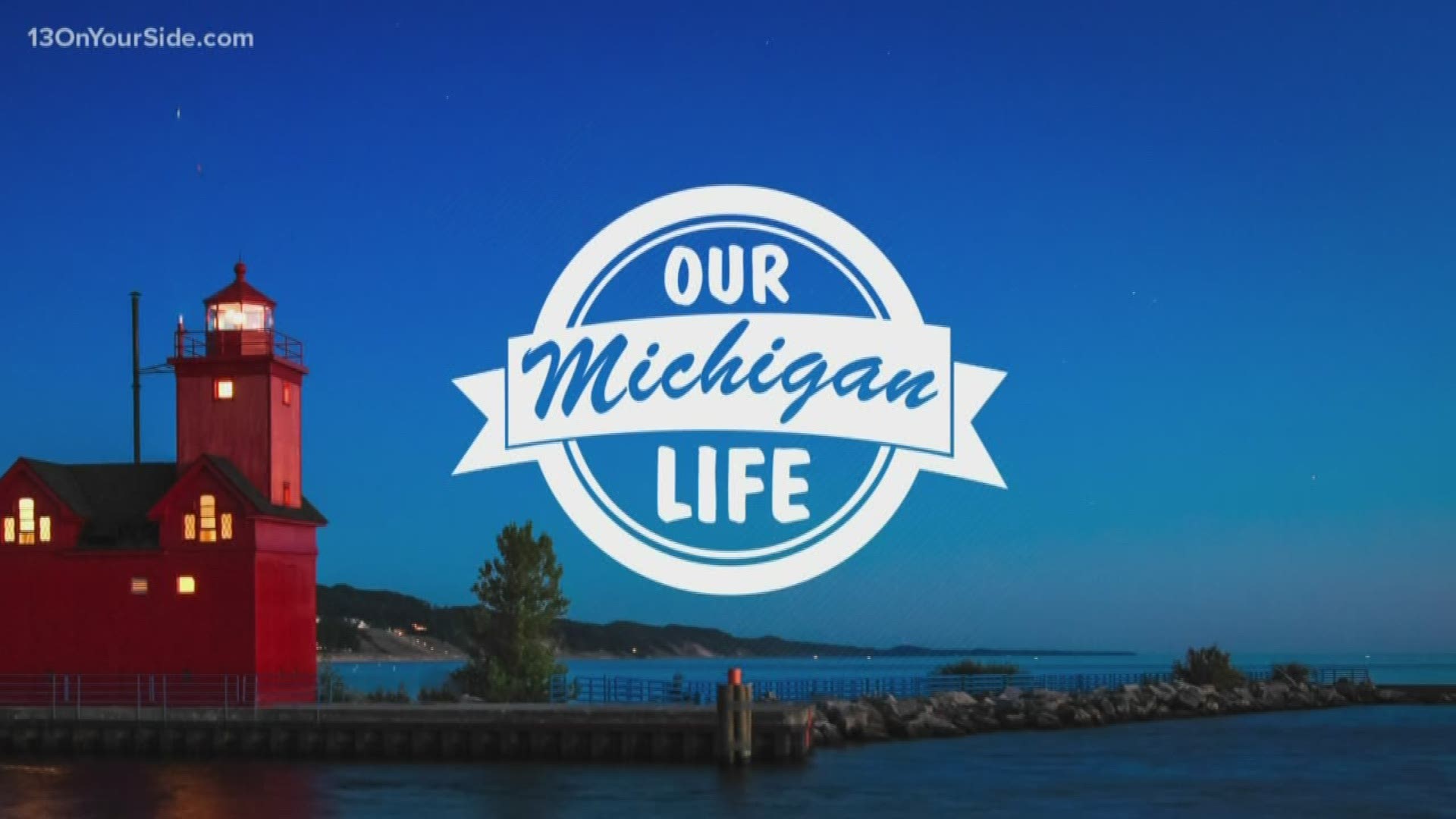 HOLLAND, Mich. — Valentine's Day is upon us.

That means love, relationships and unbreakable bonds are getting some extra attention, including a unique connection between a West Michigan musician and his bass guitar, which was stolen in 2007. It survived a cross-country odyssey, the California wildfires and who knows what else, only to be serendipitously reunited with its owner in Michigan more than a decade later.

"My family is a musical family," said Steve Secor, who has been playing bass guitar in bands since the mid-1980s. "My grandfather played saxophone with Tommy Dorsey way back in the day."

Secor says he first picked up a bass guitar when he was in eighth grade and has been in love with playing the instrument ever since.

"Thirty-five years I've been doing it," said Secor. "I knew I wasn't going to be a rock star for my career but I wanted to keep playing."

Credit: Steve Secor
Steve Secor was a member of a band. He purchased a rare 'white-on-white' Rickenbacker bass guitar in 1998. It was stolen in 2007.

Credit: Steve Secor
Steve Secor was known in the music circles as, "The guy with the white, lefty Rik." His rare bass guitar was stolen in 2007, only to be found in 2019.

"There were only 23 of them made," added Secor. "It's rare because [Rickenbacker] had done so few of the model in the left-handed configuration."

Secor says he loved the style, shape and color of the bass. It was a white-on-white color, which allowed it to draw a lot of attention.

"I played it all the time," added Secor. "[That bass] was something I always wanted and had always looked for."

"I was separated from my wife at that time and going through a divorce," said Secor. "I moved out of my house in Holland and started renting a room from a friend in Grand Rapids."

Secor says he kept his Rickenbacker hidden from plain sight and under his bed.

"One night, there was a party at the house where I was staying," said Secor. "Couple days later, I pulled the [guitar] case out, opened it up and there was nothing in it."

Secor believes that somebody attending the party stole his bass.

"I had no leads as to who took it," said Secor. "After talking with my insurance company, I knew they weren't going to cover it because I wasn't living in the house that I had homeowners insurance under.

"It was kind of a loophole because I wasn't yet settled in a permanent place so I didn't have insurance yet."

Secor says he opted not to file a police report.

Instead, he chose to do his own detective work, calling and visiting as many pawn and music shops he could find in the area.

"I did whatever I could do to get the word out, hoping these places would keep an eye out for it and then contact me," added Secor. "I assumed whoever took it was going to try and sell it."

Secor would eventually buy another bass guitar and use it regularly, but he says his feel and connection with his new one never compared to the one before.

As the months and years passed, he would occasionally search online or make a call to see if anybody may have seen a bass matching the description of his stolen instrument, but his quests would always come up empty.

Steve Secor
I'm new to this group but I am Curious if anyone has ever posted a photo and info about a stolen Rik and gotten any assistance. My older Lefty off white tuxedo bass (non stereo) was stolen over a...

In August 2019, 12 years after the bass was stolen, Secor decided to place a post on social media to see if anybody might know anything.

"I became a member of the 'Rickenbacker Bass Guitars' Facebook page," said Secor. "I put a post on there asking if anybody could help."

"I was searching the Rickenbacker page and came across Steve Secor's post," said Joe Laub, who is a California based musician. "I read through the post, looked at the picture and thought that bass really looks like the one I have used to look before I refinished it."

Credit: Joe Laub
Joe Laub responded to Steve Secor's Facebook post, regarding the stolen bass guitar. Laub found out he was in possession of the bass.

Laub sent Secor a note through Facebook Messenger saying, "Hello Steve. I may have some info on your white Ric. Please first email me and include your serial #. Thanks!"

Steve responded saying, "OMG Joe. Just seeing this in Messenger hidden messages. I will email you now and try you later."

The two decided a phone conversation would be better and that's where the dialogue really started to pick up.

"I got a hold of Elderly Instruments in Lansing, Michigan, where I bought the bass from and asked them if they might still have my proof of purchase on file," said Secor. "They did and emailed it to me.

Credit: Steve Secor
When Joe Laub reached out to Secor, he asked to see the proof of purchase, which included the serial number. Secor sent him this receipt.

"Luckily, the serial number for the bass was on the receipt."

Secor then messaged the receipt to Laub, who immediately cross-referenced it with the serial number on the bass he had that was in question.

Credit: WZZM
Joe Laub refurbished the bass guitar soon after he bough it. The only original part he left on it was the serial number plate, which led it back to Steve.

"It was a weight lifted off my shoulders," said Secor, of learning that he'd finally located his prized instrument. "It's unbelievable."

Laub then told Secor about two close calls the bass endured that could have easily led to this reunion never happening.

"When I refurbished the bass, I stripped off all of Steve's original hardware," said Laub. "The only original part I left on there was the jack plate which had the embossed serial number on it.

"If I had removed that, there's no way we could have ever confirmed this was his stolen guitar."

In October of 2017, Laub's home, which is just north of San Francisco, was burnt to the ground when the wildfires ravaged that area of the state.

Credit: Joe Laub
In 2017, Joe Laub's house was destroyed by the California wildfires. He managed to save Steve's bass guitar as he evacuated.

Credit: Joe Laub
This was all that was left of Joe Laub's California home after the wildfires burnt it in 2017. Before evacuating, he saved Steve's bass guitar.

"As we were evacuating, I just happened to grab that particular guitar," added Laub. "My music studio was inside my home, so I couldn't save them all.

"We got out of the home ten minutes before it caught fire. That's how close this bass came to being destroyed."

When Secor heard these stories, he says he was in complete shock.

Laub says he purchased the bass off of eBay for $2,000 in 2007. During his chats with Secor, he realized he bought it soon after it was stolen, and even though he's possessed it ever since, deep down, Laub knew the bass wasn't his.

Laub boxed up the bass and shipped it to Secor, who was rendered speechless when the box arrived.

Credit: WZZM
The bass arrived at Steve's workplace in Holland, Mi. He opened it immediately and couldn't believe he had his stolen bass back.

Credit: WZZM
Moments after Steve Secor opened the box, he had his bass guitar back in his hands 12 years after it was stolen.

Secor held the bass and examined it closely. He pointed out the serial number and an area of the guitar he filed down when he owned it.

"I always wondered what happened to this thing, where it went and who took it," said Secor. "This is just so bizarre and doesn't seem real."

Secor says he plans to try and return the bass to its original form. He knows finding all the original hardware for it may be tough, but he's up for the challenge.

His connection with Joe has gone far beyond finding the bass. The two say they'e shared some music and plan to one day meet face-to-face and collaborate on some projects.

If you have an idea that should be featured on "Our Michigan Life," please send a detailed email to 13 On Your Side's Brent Ashcroft: life@13onyourside.com

Other stories from Our Michigan Life