Officer Mike Fanone describes for the first time publicly how he self-deployed to the Capitol on Jan. 6 to defend democracy. 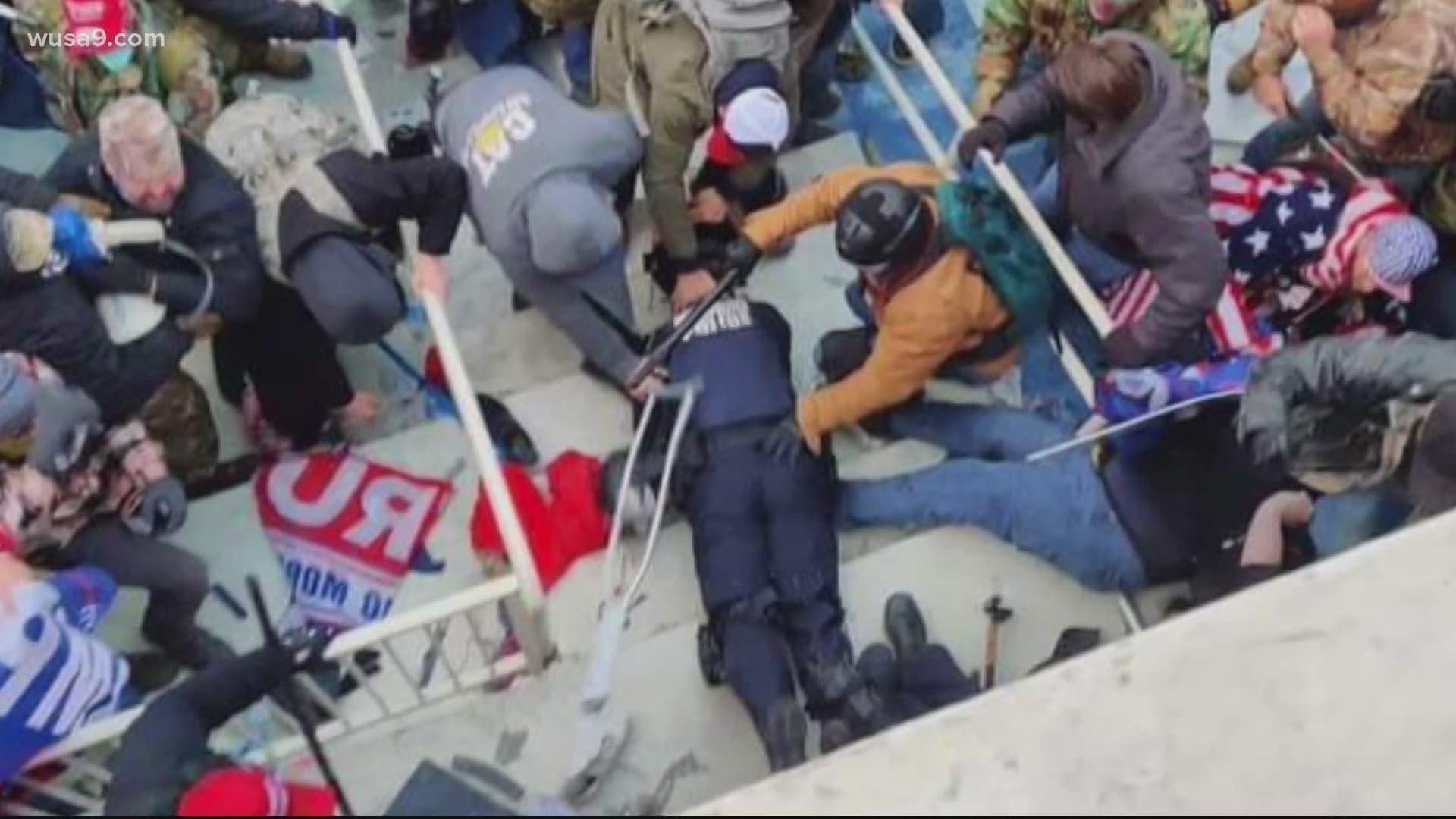 WASHINGTON — DC Police officer Mike Fanone remembers wondering if his four daughters would be OK without him as he was beaten, tased and suffered a heart attack.

It all happened as he and his fellow police officers and commanders were fighting a pitched battle with rioters in a narrow hallway at the Capitol on Jan. 6.

The Metropolitan Police Department almost never lets its line officers speak publicly to the media, but the new acting chief made an exception to offer a window into the minds of heroes who fought thousands of attackers in defense of democracy.

Fanone’s been working plainclothes for a decade and could have spent the riot waiting at his desk. But he and his police/duck hunting partner Jimmy Albright self-deployed to the Capitol.

"I said, ‘We’re going to go. Suit up,’ he told Albright as soon as he got to the office on that horrible day.

The 40-year-old hadn't taken his uniform or riot gear out of the plastic bags that were issued to him a decade ago. After he put the equipment on, a friend had to tell him to pull off the price tags.

Credit: Bruce Leshan
Ofc. Mike Fanone describes being dragged into a crowd of thousands of rioters at the Capitol and being beaten, tazed, hit with bear spray and hurt badly enough to bring on a heart attack

He went in a door on the south side of the Capitol and made his way down to the basement, where he found a police commander dry-heaving from the CS gas. The commander straightened his cap and silver eagles and prepared to return to the fight.

Fanone then found officer Daniel Hodges, bleeding being squished between a door and the mob screaming, "heave-ho."

"Dig in, MPD," he shouted as a few dozen officers tried to hold a hallway entrance.

The narrow space helped neutralize the massive crowd's advantage over the outnumbered officers.

Somehow the mob grabbed Fanone out of the line, and dragged him out into the crowd alone, beating, tasing and smashing him with flagpoles.

"I remember thinking the moment I got outside, like holy BLEEP, there’s a lot of goddamn people out here," Fanone said.

A photo from overhead shows Fanone face down on the ground, a rioter holding a police baton over his neck.

At one point, one of the rioters moved like he was going to impale him on the end of a flagpole.

"Guys were like grabbing gear off my vest," he said. "I remember guys chanting, like ‘Kill him with his own gun!’"

He held on to it.

But he thought better of it.

"I probably shoot a couple, and then they’re going to take the gun away and kill me," he said.

Fanone thought of his four daughters.

"I have kids!" he told the rioters.

A couple of them showed mercy.

"Thank you for that," he said. "But BLEEP you for being there! The only person I credit with saving my life is Jimmy Albright."

Albright pulled him back into the hallway and away from the mob.

If they assault the Capitol again on Jan. 20, will he go back on duty and go back?

"Oh hell yeah...I went there for my brothers and sisters in law enforcement," Fanone said. "There’s no army on earth that would prevent me from fighting alongside those guys."

Fanone spent a day and a half in the hospital. He said the attack brought on what he calls a "mild" heart attack. He’s on sick leave now, but said there’s no way that will stop him from returning if he's needed again.