The first yacht John Wayne ever owned, the Norwester, is now home to a floating museum* on downtown La Conner's waterfront. 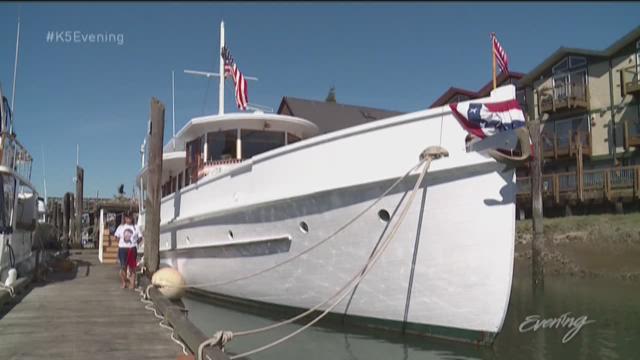 The first yacht John Wayne ever owned, the Norwester, is now home to a floating museum* on downtown La Conner’s waterfront.

John Wayne bought the Norwester from his manager in 1955. Tour guide Lisa Judy, who also serves as La Conner’s Visitor Center Director, says she heard the legendary actor had to buy it after damaging the 76-foot long yacht.

'John Wayne wasn't a very effective captain,' Judy said. 'Might have had something to do with the alcohol.'

Wayne not only traveled aboard the Norwester with his family, but also invited several notable Hollywood actors aboard. Judy says Cary Grant and Gary Cooper were among the famed guests.

'They partied,' Judy said. 'They had a great time.'

'People are amazed at how up close and personal they can get with everything,' Judy said of the guests who have toured the yacht so far.

In 'The Duke’s' sleeping quarters, many of Wayne’s personal items are even on display. His toothpaste and shaving cream line the shelves in the bathroom. A painting from Pilar Pallete, Wayne’s wife during the time he owned the yacht, also hangs above the bed.

'On the breast of his pajamas it says, yes, no, maybe,' laughed Judy. 'And there's even his shoes in there which is pretty cool. And for a man of 6'4", his shoes were not very big.'

All of the items aboard the boat were acquired by the current owner, Guy Vallee. After buying the yacht, Vallee moved it from Anacortes to La Conner, where he spent weeks restoring it.

*The museum is no longer offering tours at this time.